Thoughts on the Battlestar Galactica finale

Ron Moore was wrong. He kept saying that the BSG finale wouldn't be what anyone was expecting, but my two main predictions came true. I won't bother with a detailed review (there are plenty of those to choose from) but here are a few random thoughts:

Earth: The Colonials wore suits and ties like us. They worshiped Greek gods. Well before "All Along The Watchtower" it was inevitable that their world and ours would be connected somehow, and since a major part of the show's premise was the quest for Earth, I always believed that the fleet would eventually land on Earth, and it would be revealed that all this happened thousands of years in the past and the Colonials are our ancestors.

Starbuck and the Head People: Ron Moore and co. were in a lose-lose situation with this one. No matter how they handled the mystery of what the resurrected Starbuck, Head Six, and Head Baltar ultimately were, there was no way to please everyone. From the many Internet comments I've read, I think people were upset that we didn't get some kind of Star Trek explanation, especially in Starbuck's case. The term "Star Trek explanation" refers to TNG-era Trek's propensity to reduce any seemingly unexplainable phenomonon to a quantifiable, not-at-all-mysterious thing, usually by way of dense, technobabble-heavy exposition. All in all, I'm not unsatisfied by the choices Ron and co. made here.

The Flashbacks: Watching the flasbacks during Daybreak's first hour, I assumed that they would pay off during the story's final two hours, that the character's actions in the flasback sequences would somehow inform their choices in the present day. Mostly, I was wrong. Except for the Baltar story, which set up his eventual choice to become a farmer like his father, the flashbacks just felt like a late addition. I mean, did we really need to see a drunken Adama vomiting in an alley? And yes, I understood that the pigeon in Lee's apartment was supposed to represent Starbuck, but that, too, seemed tacked on. In one of this interviews about the finale, Ron Moore revealed that it was originally concieved as a two-hour episode, but then the network gave them an extra hour fairly late in the game. More than anything else, the flashbacks look like an attempt to spend the extra hour they'd unexpectedly been given.

I haven't seen every episode of BSG, some of it is just too dark for my tastes. However, I think that Ron Moore and the writing staff did the best job anyone could have done in telling the story of Battlestar Galactica. To do four seasons of a science fiction TV series and never once fall back on genre conventions like time travel, evil twins, ray guns, bumpy-headed aliens, and cardboard characters is a feat that's never been accomplished. It's a testament to the good that can come when you scrap an old and tired way of doing things in favor of a fresh approach.

I'm on vacation this week, visiting my parents in the mountains. I was going through some family photos when I happened upon some pictures of our first trip to EPCOT in the fall of 1984. We spent the morning at the Magic Kingdom, then headed over to EPCOT. Much to my dismay, my parents marched right past all the marvelous Future World pavilions so my mom could go to Morocco and shop. While she was rooting through the gift shop in search of who-knows-what, my dad snapped this picture of my sister, my grandmother, and I: 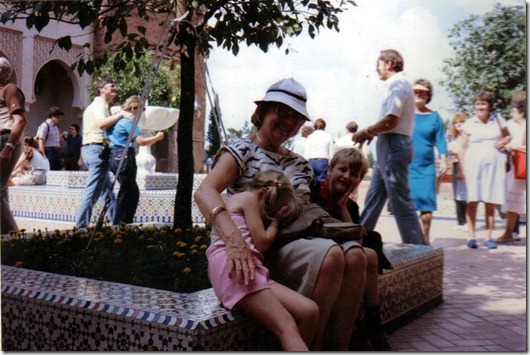 As you can see, I was not happy to be in Morocco. My poor grandmother was doing her best to put a happy face on the situation, but for a six-year-old there are few tortures worse than having to sit and be bored when there are exciting experiences around the corner, just waiting to be had. Fortunately, my mom soon finished in Morocco, and we headed off across the World Showcase, pausing to snap this picture: 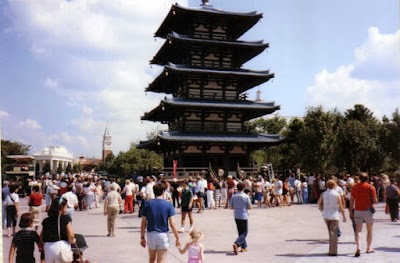 We finally did make it to Future World, where we rode Journey Into Imagination, World of Motion, Horizons, Universe of Energy, and finally Spaceship Earth. At the end of the day, my parents took this picture of my sister and I outside Earth Station: 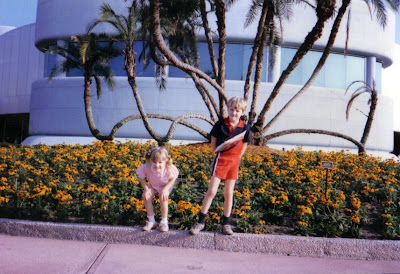 Sadly, it didn't occur to either of my parents to take more pictures of Future World's architectural wonders, but I suppose it never occurred to them that in years to come some of them might not be there anymore. Many people complained that EPCOT Center was too staid and "adult" to be appealing to little kids like the 1984 versions of my sister and I, but I can tell you that I was excited and inspired by what I saw that day. True, I was already prone to spend recess pretending to be Captain Kirk while other kids were pretending to be Autobots and Decepticons, so I'm not saying I was a typical six-year-old. Still, those few hours spent in Future World almost 25 years ago continue to affect me to this day. I'm not sure if Mission:Space, Test Track, or The Seas With Nemo and His Computer-Generated Friends are capable of working the same magic on today's kids.

As an added bonus, here are some pictures from my very first trip to the Magic Kingdom in 1981: 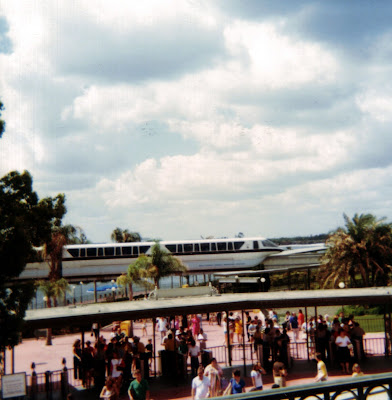 The monorail on approach to the Magic Kingdom station. The monorail has always been one of my favorite things about Disney World, and it looks just as sleek and futuristic now as it did the year the first Space Shuttle launched. 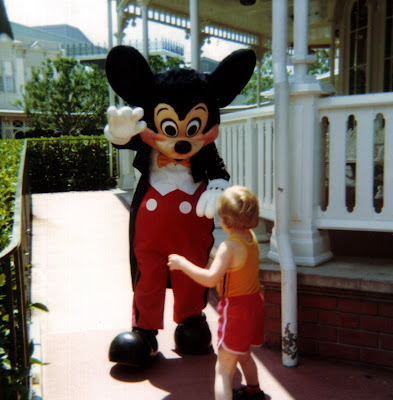 Finally, here's a picture of my chance meeting with Mickey Mouse. This is before the Magic Kingdom had designated Character Greeting Areas, and the characters roamed the park. Of course, I understand why things have to be more structured now, but it's nice to remember a simpler time.

I'll be back next week with an honest look at the plusses and minuses of FastPass. Thanks for reading!