I finally got it the other day.

Conventional wisdom says that EPCOT Center was too dry, scholarly, and boring for your average vacationer, especially those of the non-adult variety. And I never completely understood how anyone who’s not an idiot could think this. Oh, I understand how a kid could be bored by World Showcase. I remember being bored out of my skull in 1984 when my parents dragged 6-year-old me past all the amazingly awesome stuff in Future World so my mom could engage in the thrilling World Showcase activity of looking at things in shops. But from that first trip in 1984 until I became a surly teenager in the early 90s, I considered Future World to be maybe the one place on the planet where it was impossible to be bored. I wanted to live there.

My response to people who claim that EPCOT Center’s Future World was boring for kids has always been to point out that I loved it when I was a kid and a lot of other people loved it when they were kids, and the only kids who did not love it were probably the children of anti-intellectual pig-brained morons who think Africa is a country and “science” is a four-letter word. (I don’t mean they think “science” is a curse word. I mean they spell it with four letters.)

And then the other day I was listening to the excellent Living Seas audio collection from epcotlegacy.com. When I was a kid I loved The Living Seas. It was still under construction on my first EPCOT trip, but shortly after that my grandfather bought me the definitive EPCOT Center book Walt Disney’s EPCOT: Creating The New World of Tomorrow and I spent the next two years poring over its description of the future Living Seas pavilion. I gazed at the pictures of concept art and the cutaway model of the pavilion and tried to imagine what it would be like. 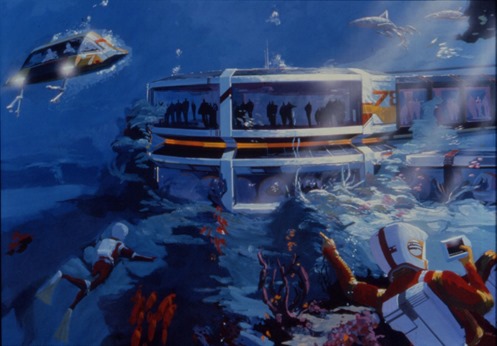 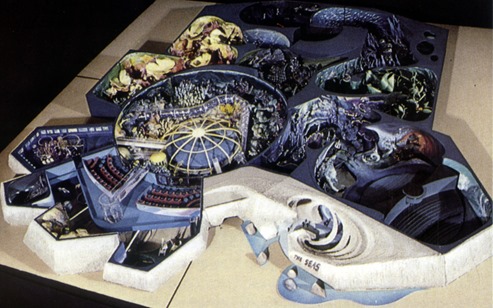 Of course, much of what the book promised—most notably a Poseidon-narrated dark ride in bubble-shaped Omnimovers—did not materialize. But I didn’t care (or necessarily even realize this) on my first visit the year The Living Seas opened. SeaBase Alpha looked like an underwater Starbase straight out of the Star Trek movies, and I totally believed that I was actually submerged in a giant saltwater aquarium. (The EPCOT Center book said that the Seabase would be located in the center of the tank, and the finished pavilion did a good job of maintaining this illusion)

But there was not a lot to do at The Living Seas. Unlike later Eisner-era attractions like Body Wars or Alien Encounter where visitors are cast in the role of people taking a routine tour of a futuristic facility when something goes horribly wrong, The Living Seas cast visitors as people taking a routine tour of a futuristic underwater research station when something suddenly does not go horribly wrong, and really no unexpected events happen at all. I realized this as I listened to the audio cue that played in the preshow holding area. While ethereal underwatery music played, a competent professional voice explained that guests could file into a theater for a briefing before their journey to SeaBase Alpha or bypass the briefing and head directly for the Hydrolators if they so desired. I always thought of this as a neat piece of atmosphere that reinforced the idea of actually visiting an underwater base in a Star Trek-like future.

But as I approach middle age I have lots of friends with kids. All of these kids are really awesome, intelligent, and inquisitive human beings. And as I imagined myself standing in The Living Seas’ preshow holding area listening to that competent professional voice go on about how you could either go to the briefing or not go to the briefing I suddenly got a vision of one of those intelligent and inquisitive kids going “Mo-ooom! This is so BORING!”

Briefings are not a fun activity for the under-20 crowd. Actually, not really for the over-20 crowd either. “Hey kids! Let’s go to a briefing!” is never something you will hear a parent say on vacation, or probably any other time, unless that parent is under the influence of powerful medication.

Now, I know that The Living Seas was a product of the pre-smartphone, pre-Game Boy era where the cutting edge in interactive queue design was having stuff in the queue to look at while you waited. And SeaBase Alpha was really supposed to be the post-show after a really cool dark ride in bubble-shaped Omnimovers until United Technologies got all stingy with their sponsorship money. But the fact is that a lot of stuff in Future World during the EPCOT Center era really was a little too dry and stentorian for kids whose imaginary friend was not Mr. Spock (i.e. kids who were not me).

Sure, those things were balanced out by Journey Into Imagination, World of Motion, Horizons, and the interactive CommuniCore exhibits that most kids found wonderfully entertaining and inspiring. But in a place like Disney World that’s marketed as a wall-to-wall entertainment paradise, being suddenly confronted by the non-dinosaur portions of the original Universe of Energy (which operated under the woefully mistaken assumption that anything projected on a giant movie screen is automatically entertaining) can be a little jarring for a kid. And now I understand that.

So, to all the people who complained that the cherished EPCOT Center of my childhood was too boring for kids to enjoy, I apologize saying that you’re all pig-brained morons.

The actual figure is around 52%.