If you follow R.A. Pedersen on Twitter (his handle is @EPCOTNRG) it will not be very long before you learn that he has a book out, and is very eager to distribute it as widely as possible. “Hey @TheBible,” he’ll tweet. “How about adding a 67th book to the canon?”  Or if someone complains about high gas prices, he’ll suggest “Why not just walk to work and use your gas money to buy multiple copies of my book?”  Of course, if you had worked as hard on The Epcot Explorer’s Encyclopedia as R.A. Pedersen appears to have done, you would promote it at every opportunity, too.

The book is packed with information. It’s 262 pages long, and there are no illustrations. Probably this is for legal reasons, but it means the book is absolutely devoid of padding. The history of every current and former EPCOT pavilion is delved into. The Epcot Explorer’s Encyclopedia isn’t a modern version of the old Richard Beard EPCOT Center book; that volume was really a piece of promotional literature. More than anything, it’s like a written version of Martin Smith’s Ultimate Tribute videos, and that’s a good thing. As much as I love Martin’s videos, I don’t always have an hour to sit down and watch one, but I can spend maybe fifteen minutes reading this book and get a lot of the same information.

The intended audience of The Epcot Explorer’s Encyclopedia is the Disney geek community. I don’t believe the author has ever come out and stated that, but it’s the most logical conclusion. After all, the book isn’t designed to help you plan a trip, and the casual reader will probably be turned off by the lack of pictures. Again, I understand why there aren’t pictures-many of them would have had to come from official Disney sources, and with that would come all the complexities of copyright law, but some pictures would have helped to illustrate those pieces of old attractions like Horizons, World of Motion, and Journey Into Imagination, that we WEDHeads remember clearly but the general public does not. Really, it highlights the fact that Disney would never lend their official support to book like this, which is a shame. The Epcot Explorer’s Encyclopedia doesn’t dwell on the negative aspects of the park’s history, but it doesn’t go the Disney corporate route and pretend they don’t exist, either.

If I have one criticism of this book, it’s that the editing and proofreading was done by the author himself, and therefore some spelling and grammatical errors were missed. I know how difficult it can be to proofread your own work; I once wrote a rather lengthy story for one of the Star Trek fanzines published by Orion Press, and the editor, Randy Landers, was able to point out errors I hadn’t noticed during my proofreading. I was enormously grateful for his assistance. It’s my hope that, if the author of The Epcot Explorer’s Encyclopedia produces future editions of the book, he’ll avail himself of a second set of eyes to look over the manuscript.

In conclusion, if you’re at all interested in EPCOT, I definitely recommend this book! Commander Willard Decker bought the book, and he ascended to a higher plane of existence after merging with a self-aware space probe!

Klingon Commander Kruge failed to buy the book, and he was kicked off a cliff by William Shatner!

Information on the various ways to purchase The EPCOT Explorer’s Encyclopedia can be found here: http://www.epcyclopedia.com/buy-the-book/

Posted by David Landon at Monday, May 23, 2011 1 comments
Email ThisBlogThis!Share to TwitterShare to FacebookShare to Pinterest
Labels: EPCOT Center

The various fan communities on the Internet are ravenous beasts. We have an insatiable hunger for as much information as possible on the subjects of our geekish devotion. If a movie about our favorite superhero is greenlit, we want to know which actors will be cast and who the villain will be and what the costume will look like and what the story will be, and we want this information RIGHT NOW. And as soon as that stuff starts to leak out and our curiosity is satisfied, we start wondering about the sequel.

The Disney fan community is no different. For weeks, even months, we speculated about the rumors that Disney would announce a Fantasyland expansion project at Walt Disney World. And even though the project is now under way and won’t be totally complete until sometime around 2014, it’s old news to us. We know what’s going on behind those construction walls. What we want to know is: what’s next? What’s the next big project? The beast digested all the Fantasyland stuff long ago, and while the news about Star Tours and the Tiki Room were nice snacks, there’s not a lot of mystery there. The beast is hungry, and it wants to know where the next meal is coming from.

But is that really fair? In the old pre-Internet days, we wouldn’t have even known about most of these projects unless our local newspaper happened to carry a story about them. More likely, we’d hear about it from a friend, or find out because we happened to visit the parks while construction was going on. We were curious, sure, but the curiosity didn’t consume us. Why the change? Some say it’s because the Internet has turned us into impossible-to-please information junkies, desperate for our next fix. Others seem to feel that, because Disney has stumbled so badly with attractions like Stitch’s Great Escape and Chester and Hester’s Dino-Rama, we can’t feel comfortable sitting back and trusting them to do a good job. We have to scrutinize each scrap of leaked information and pounce on anything we don’t like in the hopes that our outcries will be heard back at Disney corporate headquarters, or at the very least we’ll know ahead of time that a new attraction is going to be bad and steel ourselves for the disappointment.

Don’t get me wrong. There are things I’m desperate for Disney to do: restore the Imagination pavilion, do something with the vacant Wonders of Life, and replace Stitch’s Great Escape with something that’s actually good. But right now, they’re in the process of expanding Fantasyland into an area that’s been vacant since 20,000 Leagues shut down. In the process, we’re increasing Fantasyland’s attraction count by one, and the long-rumored Seven Dwarves Mine Train is finally going to be built.

So, even though we’re all eager for fresh scraps of Disney World news, why not sit back and enjoy contemplating the biggest expansion to the Magic Kingdom since the Tomorrowland expansion of 1975? For a little while, at least? Would it be so bad if the beast went on a little diet?

Another New Look-And More To Come

Welcome to yet another visual overhaul here at futureprobe! Much like some of my online friends who love EPCOT Center even though they're too young to have experienced its 1980s heyday, I've always had a fondness for the old "analog" vision of the future that was epitomized by shows like the original Star Trek, movies like 2001, and of course Disneyland's grand "re-imagined" Tomorrowland that opened in 1967.

That Tomorrowland was home to one of the most imaginative dark rides ever: Adventures In Inner-Space. It was a trippy, wholly unique experience that might not wow modern audiences, but still left an impression on those who saw it. And just like the people today who wish they'd gotten the chance to ride Horizons, I often wish I'd have been there to take a ride through the Mighty Microscope: 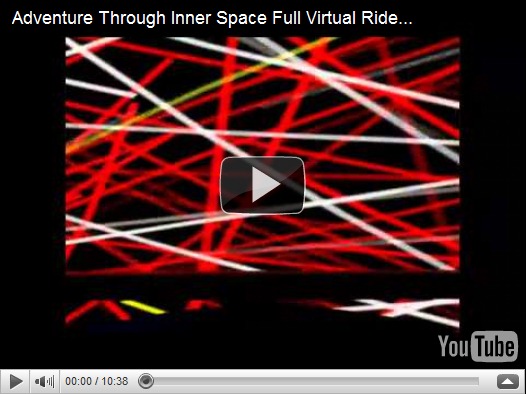 It's not just my fondness for old-school Tomorrowland that prompted the new TWA Moonliner-inspired look, though. This is the first step of an exciting new project I've recently become part of, a project that will bring futureprobe into a new medium.

I hope you'll stick around. 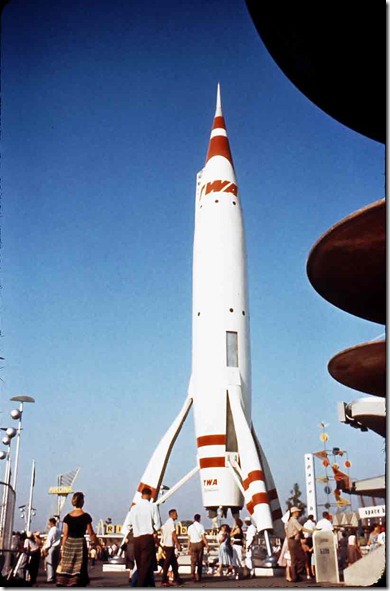 Posted by David Landon at Friday, May 13, 2011 2 comments
Email ThisBlogThis!Share to TwitterShare to FacebookShare to Pinterest
Labels: Tomorrowland

EPCOT: Whither The Marketing?

If you were alive in the 1980s and early 1990s, you knew that EPCOT Center at Walt Disney World was a big deal. You knew this because Disney marketed the heck out of the place. Not only were entire television commercials devoted to it . . . 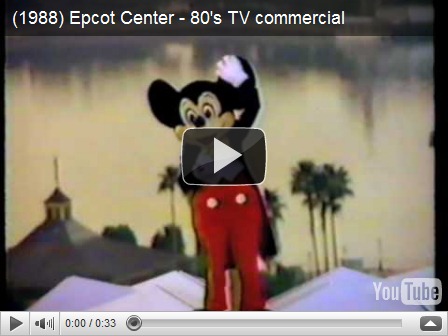 . . . but Spaceship Earth was featured prominently in the intro to the weekly Disney Sunday Movie, even more prominently than Cinderella Castle: 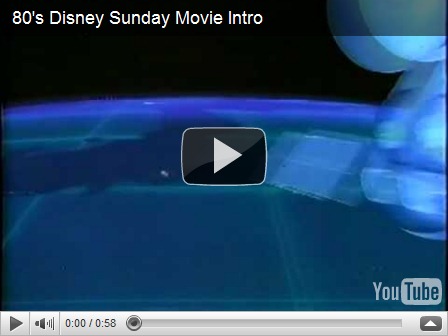 A person back then could be forgiven for thinking that Spaceship Earth, not Cinderella Castle, was Disney World’s signature icon. Today, things are very different. Take a look at a couple of Disney Parks commercials from the last five years: 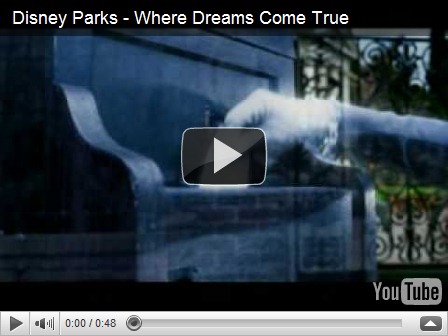 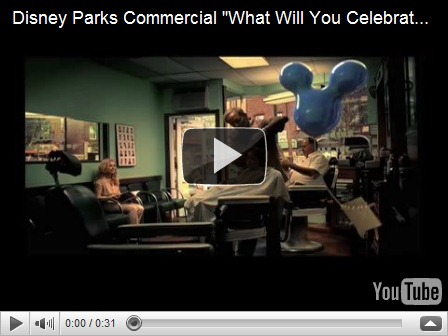 Judging from commercials like these, you’d think that the Magic Kingdom is the only thing at Florida’s Disney World. Now, I understand that the Magic Kingdom is the most quintessentially “Disney” park on the Florida property. But EPCOT is the most unique theme park on the planet. Universal has Studios parks in Florida and California. Busch Gardens has animals and roller coasters. But only Disney World has an EPCOT. Where else can you ride through the history of civilization, see giant Animatronic dinosaurs, visit a Mexican pyramid, and take a Viking boat ride all at the same park?

Disney has a stated desire to appeal to a broader demographic than just little girls and their parents. That’s why they cancelled the princess-themed meet-and-greets in the new Fantasyland in favor of a Seven Dwarves coaster. In EPCOT, they’ve got a whole park with that kind of broad appeal. Why not advertise it? Why not remind people that it’s there?

EPCOT is a big gun in Disney’s arsenal. It’s time they remembered to use it.