We Need to Talk About Gene Roddenberry

Over the last few years, the bad behavior of lots of men in show business has come to light. For ages, guys like Harvey Weinstein, Kevin Spacey, Matt Lauer, and Bill Cosby were able to shush all the stories about their awful rapey behavior (which often included actual rape) and for the most part the public went along with it right up until they suddenly didn't.

Exactly why people suddenly decided to believe the victims of these and many other men after years of NOT doing that is outside the scope of this blog. But the vast majority of Star Trek fans share the belief that everyone should be treated with respect and dignity regardless of their gender or their spot on the org chart of whatever organization they belong to. And while folks have different opinions on whether it's okay to still enjoy old reruns of The Cosby Show, nobody is arguing that Bill Cosby the man is worthy of the admiration he enjoyed before everyone realized he was a serial rapist.

Which is why we need to talk about Gene Roddenberry.

No, I'm not calling Gene a rapist. As far as I know, he never physically forced himself on anyone, or drugged them and assaulted them while they were unconscious, or preyed on minors. But his views on women were deeply problematic. Don't believe me? Take a look at his novelization of Star Trek: The Motion Picture. Despite persistent misunderstandings, the book was not ghostwritten by Alan Dean Foster; it's pure, unfiltered 200-proof Roddenberry. Most fans read it through the gauzy lens of nostalgia, but when we step back and view it more objectively it's painfully obvious that Gene viewed women as objects. He used to joke that it was okay for him to portray women as sex objects because he himself had been a sex object in his younger days and he quite enjoyed it. Which is a specious argument because it ignores the power imbalance between men and women in Hollywood and in society in general.

As he aged, Roddenberry's attitudes about women became downright misogynistic. The second volume of Mark A. Altman and Edward Gross's oral history of Star Trek, The Fifty Year Mission, quotes people who worked with Roddenberry early in The Next Generation's run saying how he was so bitter over the divorce settlement he had to pay his ex-wife (a divorce that was caused by his serial infidelity) that he would launch into angry, red-faced, anti-woman rants when people visited his office.

And then there's his longtime assistant/mistress Susan Sackett. Very early in her employment, their relationship turned sexual. In her 2002 book Inside Trek, Sackett recounted how Roddenberry convinced her to swim naked in his pool, then repeatedly pressured her to perform a sex act on him until she finally gave in. She wrote:

Although I felt somewhat used and left out, I was convinced that I was really a very lucky girl, to be here in this time and place. It was almost as if I felt a responsibility to the fans, to keep their hero happy. I was still in awe of this great man, falling in love with him, and I would have done anything to please him. And so, to paraphrase Queen Victoria’s suggestion to young English brides, I closed my eyes and thought of Star Trek.

Obviously this was no healthy relationship between equals. Although Ms. Sackett may technically have consented, Roddenberry clearly had no qualms about exploiting the power imbalance between them to get the physical gratification he wanted.

But why should we care? Gene Roddenberry died thirty years ago. The Star Trek franchise has passed through the hands of three distinct groups of creators since then. And although Susan Sackett wrote honestly about her relationship with Roddenberry, she never really accused him of forcing her into anything. At worst, Gene Roddenberry was just like a thousand other sleazy Hollywood producers who used their position to extract a sexual favor from someone who might not have succumbed to their advances if they'd met as equals.

I think it matters. It matters because a core component of Star Trek fandom has always been the Gene Roddenberry personality cult. During his lifetime, Roddenberry talked at length about how he wanted Star Trek to reflect his own deeply-held views on politics, morality, and the human condition. And even though most folks are quick to admit that Gene Rodenberry was no saint, they can't seem to stop treating him like one. 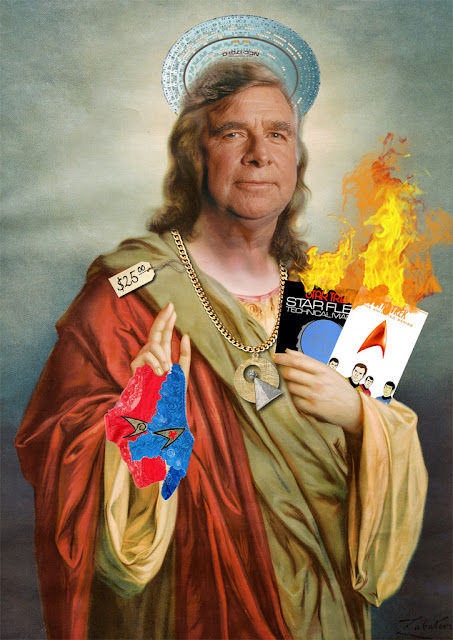 Every discussion of Star Trek's enduring popularity seems to veer into poetic musings about "Gene's vision".  Fans invoke "Gene's vision" to lend credence to their arguments over the relative goodness or badness of whatever Trek installment they're talking about, and the franchise's corporate masters are always quick to invoke it to promote their new Star Trek projects.

Gene Roddenberry created Star Trek, but he didn't create its philosophical underpinnings from whole cloth. Fans like to imagine that Star Trek was the first and only TV show in the 1960s to say racism is wrong, that peace is better than war, that people who are different from you shouldn't be automatically feared and distrusted, and that just because something looks ugly doesn't mean it's evil. But in reality, a lot of those same messages are found in episodes of The Twilight Zone and even Bonanza! And of course, all of those ideas predate the medium of television and even Gene Roddenberry himself.

Yes, Gene infused the show he created with those ethics. That's laudable. But since he was also guilty of behavior that was creepy and awful and would get him fired and ostracized if it happened today, I think it's time to stop idolizing Gene Roddenberry the man. Fans should stop invoking Gene Roddenberry to justify their Star Trek opinions, and the producers of modern productions should stop trying to ingratiate themselves with the fanbase by ending seasons of Discovery with soaring snippets of Gene Roddenberry oratory.

Star Trek's ideals are bigger than any one guy.