One of EPCOT Center’s coolest little details was the circular logos that represented each Future World pavilion. They slowly disappeared during the 1990s and 2000s as pavilions were refurbished and updated, but there are still two places in Future World where you can see them, not counting the retro EPCOT merchandise in Mouse Gear.

The first one can be seen just inside the entrance to the Energy pavilion, where the old Universe of Energy logo is still incorporated into the colorful mosaic that decorates the foyer. 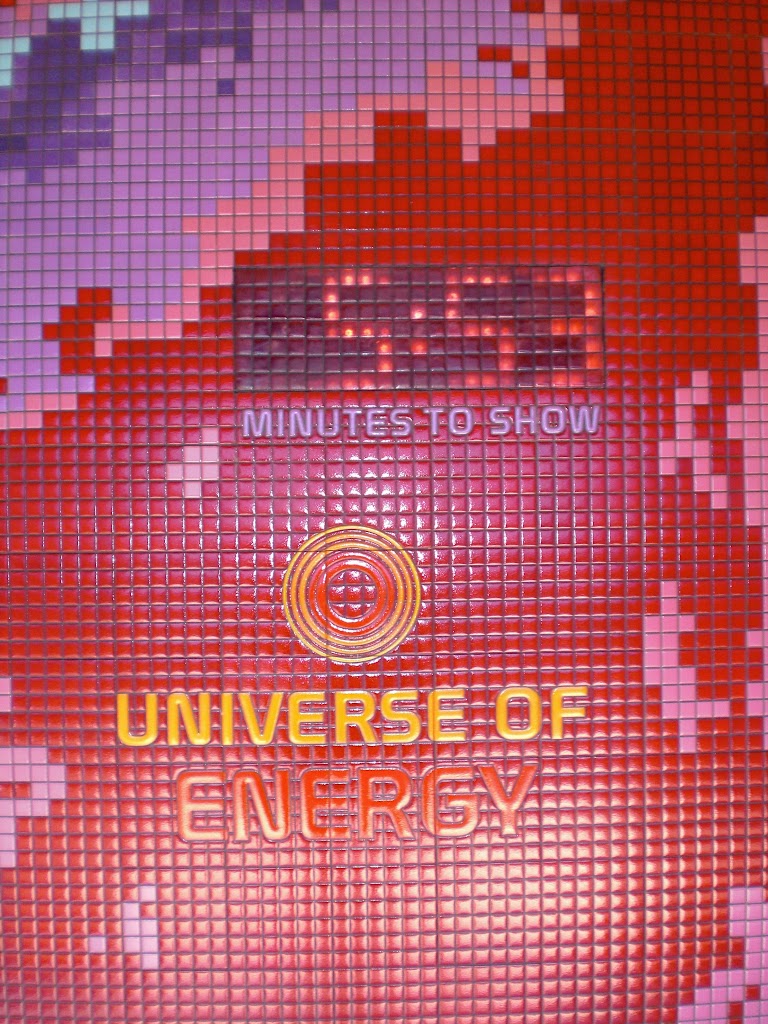 The second place is inside The Land, where the pavilion’s old logo still decorates the FastPass machines near the Living With The Land queue area. 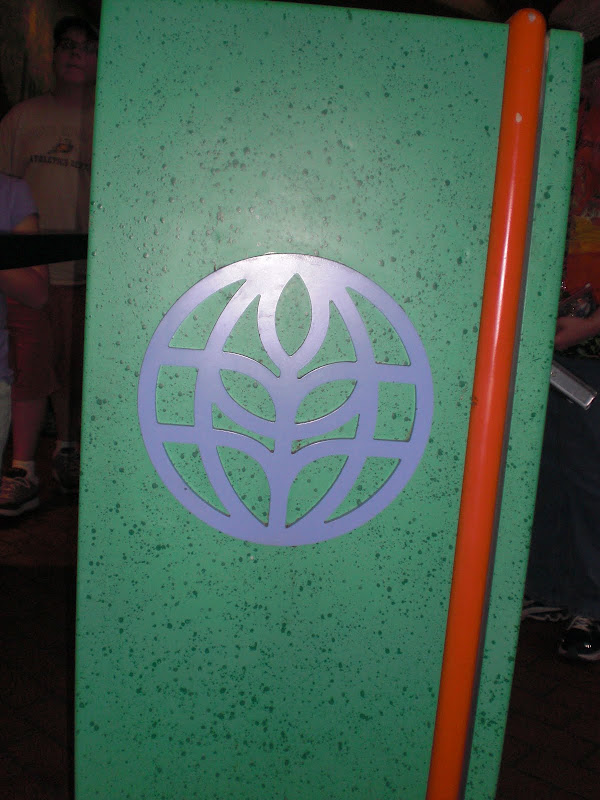 This same logo also decorates the right shoulder of the uniforms for the Cast Members who work in the pavilion.

Most EPCOT visitors don’t notice little details like this, and while their presence may not seriously impact anyone’s enjoyment of the park, it’s heartwarming to see them all the same.

The EPCOT Flower and Garden Festival is in full swing, so my wife and I headed down there last weekend. I thought I’d share some pictures I took while we were there, and for your enjoyment, you can click on each picture to see a larger version. 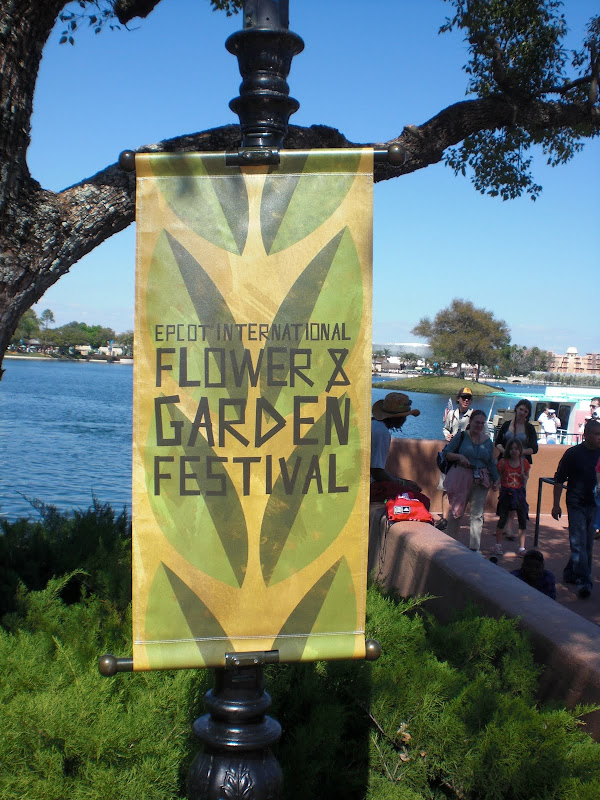 For an EPCOT Center geek like me the best thing about these special events is that the former Wonders of Life pavilion is open. The attractions are long gone, even their signage has been removed, but you can still see small glimpses of the way the pavilion used to be. 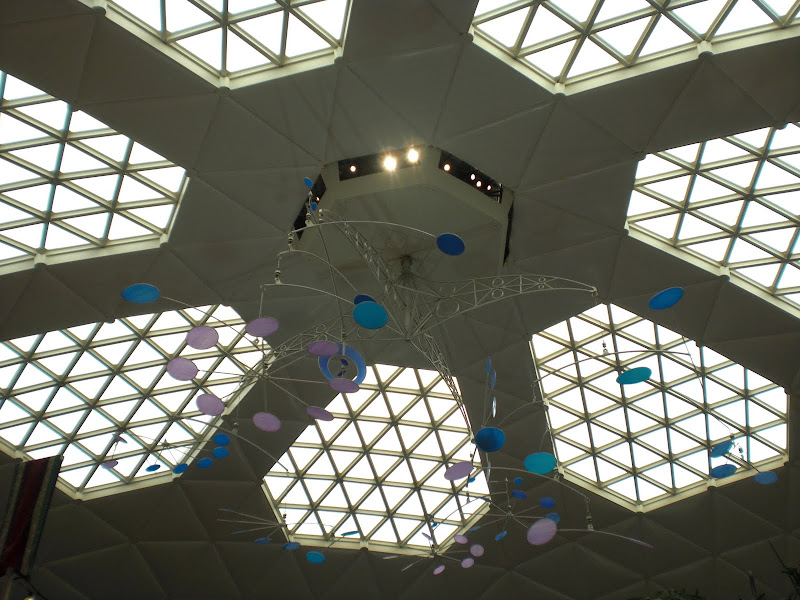 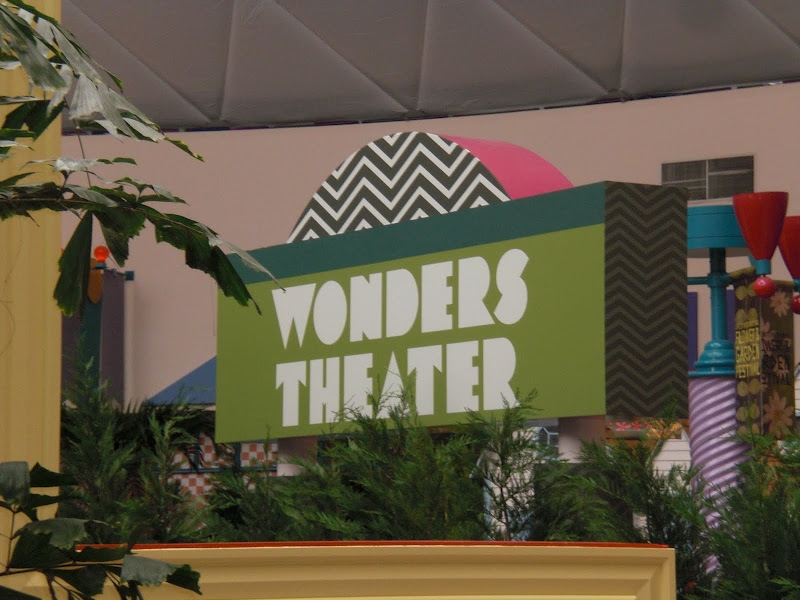 One of the best things that’s happened at EPCOT in the last year or so has been the restoration of the Universe of Energy pavilion to it’s original color scheme. Sadly, it still houses a show only 90’s Kid could love, but at least the pastel rainbow is no more. 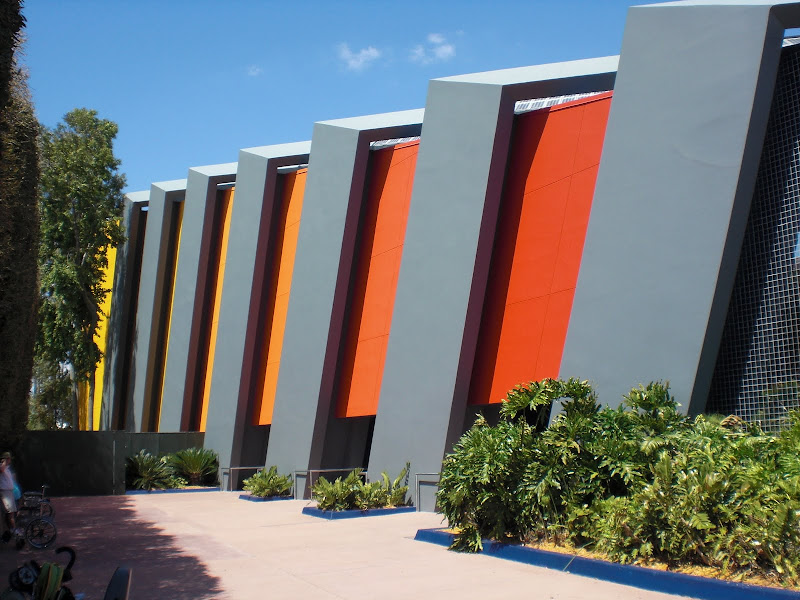 Now for some actual Flower and Garden-related stuff. The area behind Innoventions West has been given a nice flower arrangement that features dolphins, stars, and a giant Mickey head. 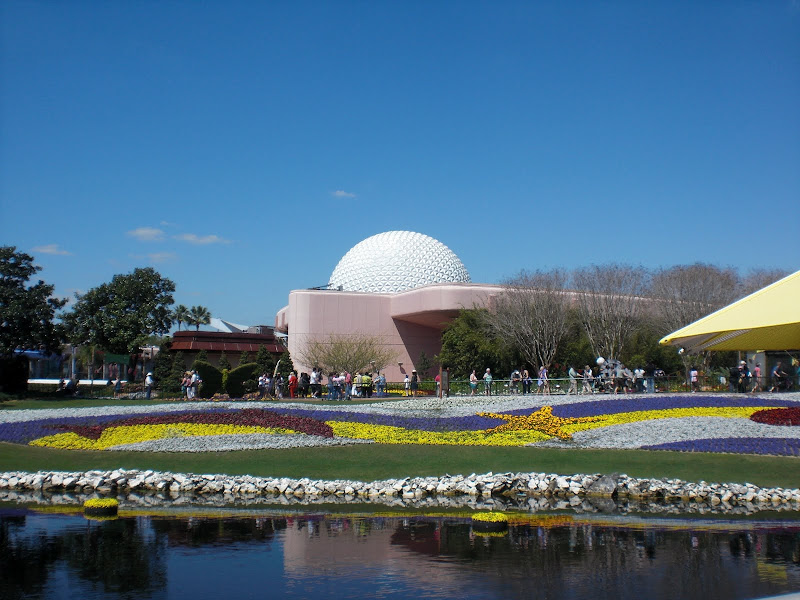 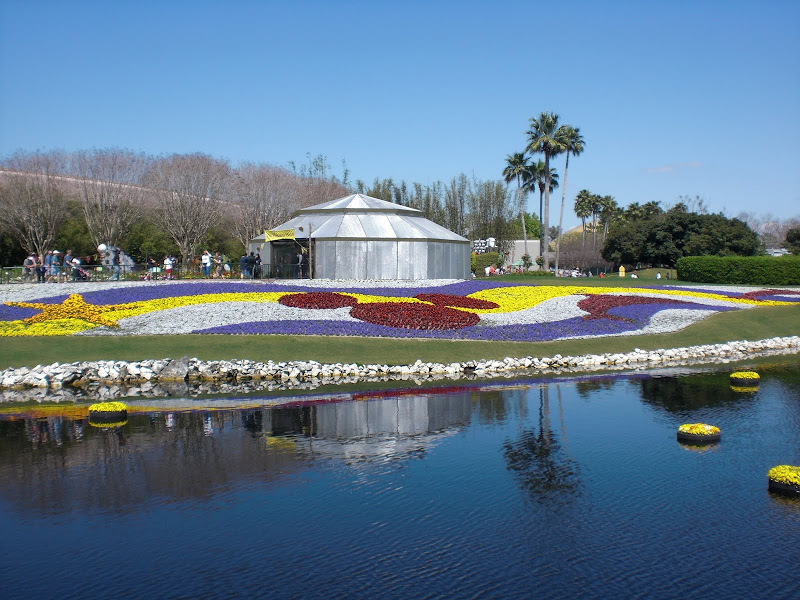 I took those pictures from the bridge that links the Innoventions area to the Odyssey pavilion, known to today’s EPCOT visitors as a good place to go to the bathroom. Naturally, I couldn’t resist snapping a few pictures of this relic of EPCOT Center. 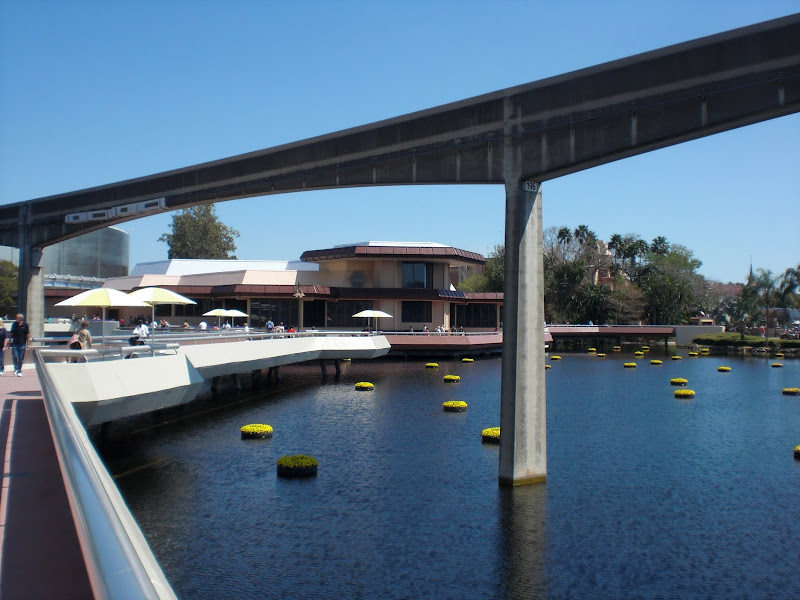 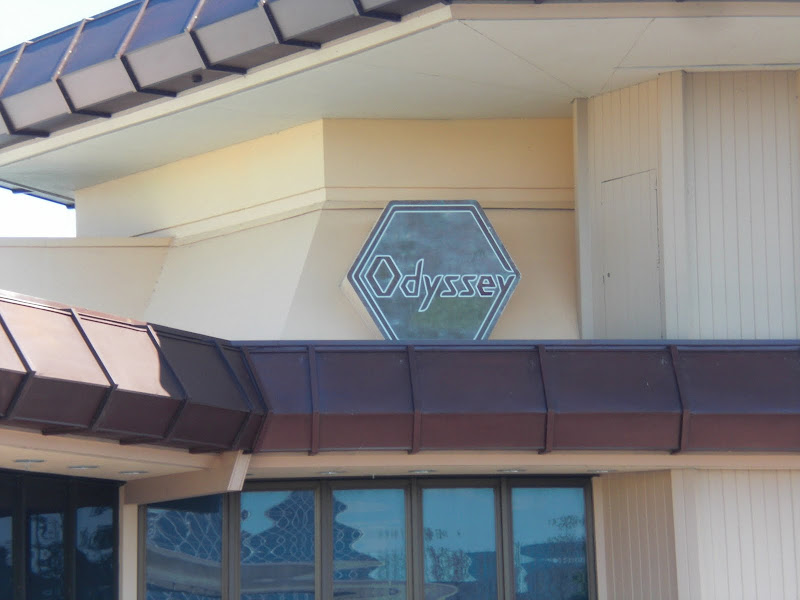 The bridge between Innoventions and the Odyssey is also a good place to get a picture of Test Track that allows you to imagine you’re really looking at World of Motion, because of the way that the trees almost obscure the ride track that wraps around the building. 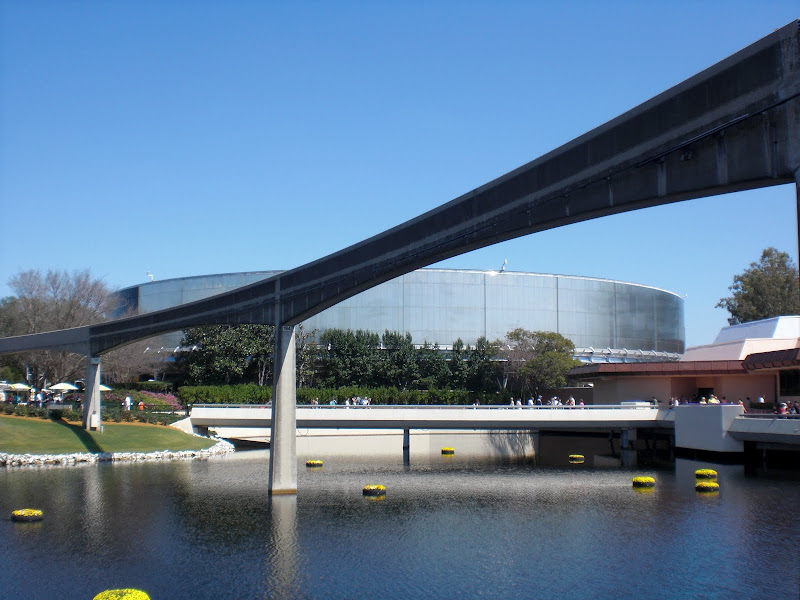 As we walked around the World Showcase, we stopped between France and the UK to snap a picture across the lagoon. You can see the Characters in Flight balloon from Downtown Disney peeking over the treetops. 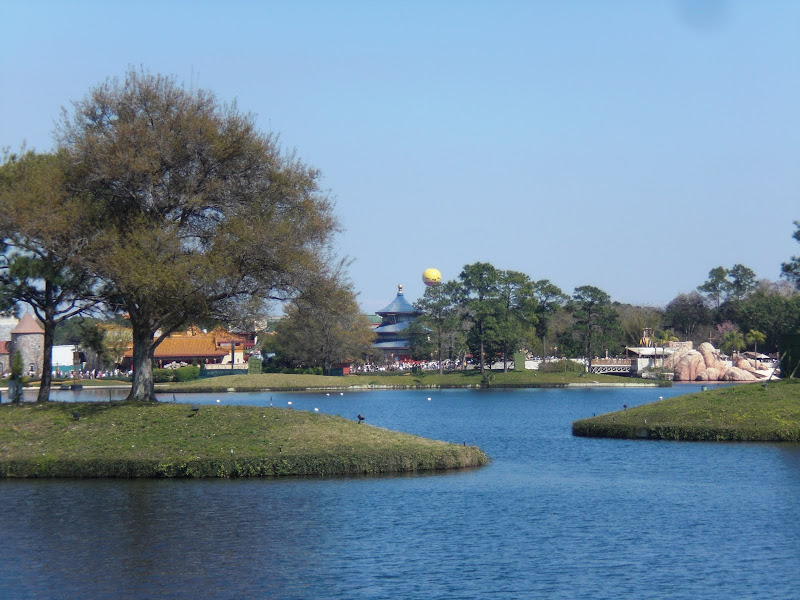 Next, my wife wanted to get some pictures of the fountains in front of the Imagination pavilion’s Magic Eye Theater. Other than the iconic glass pyramids, I believe that the fountains are the only feature of the Imagination pavilion that hasn’t been completely ruined by vicious cost-cutting and the desire to promote a lackluster film franchise nobody remembers or cares about. Of course, now that I’ve said that Team Disney Orlando will probably raze the fountains and replace them with a Dr. Nigel Channing statue. 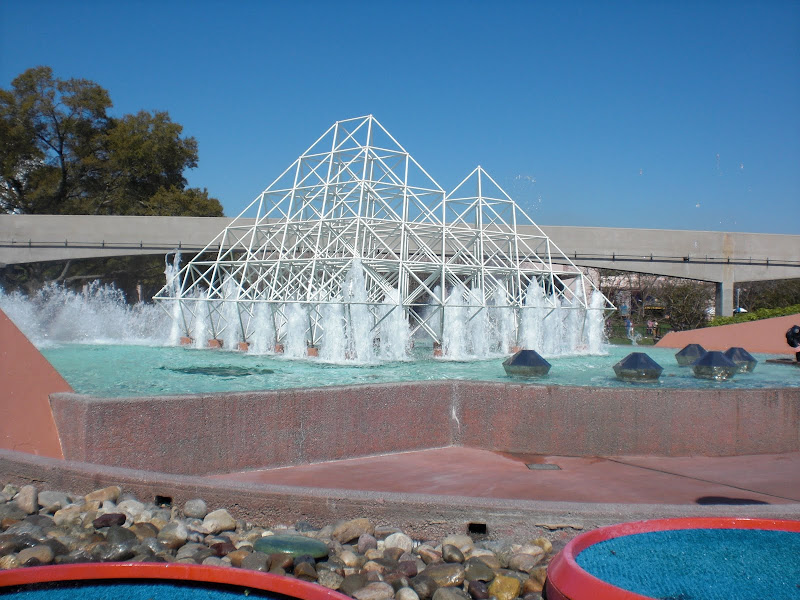 My wife insisted that I sit in front of one of the jumping fountains so she could get a picture of the water jumping over my head, resulting in the only picture of me that I will ever post here. I’m sorry you have to see this. 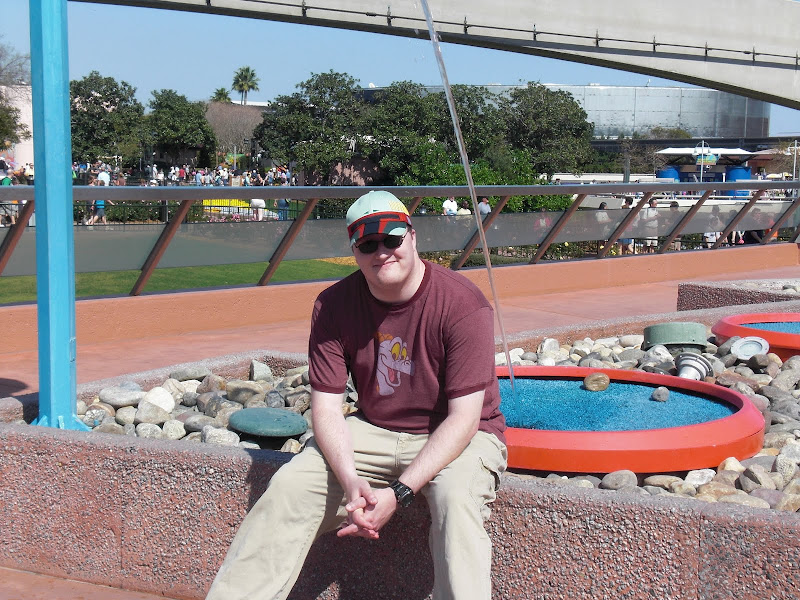 Next, we relaxed on the Living With The Land boat ride (after a 20 minute wait; the park was very crowded that day!) and my wife took pictures of various Mickey-shaped things along the way. 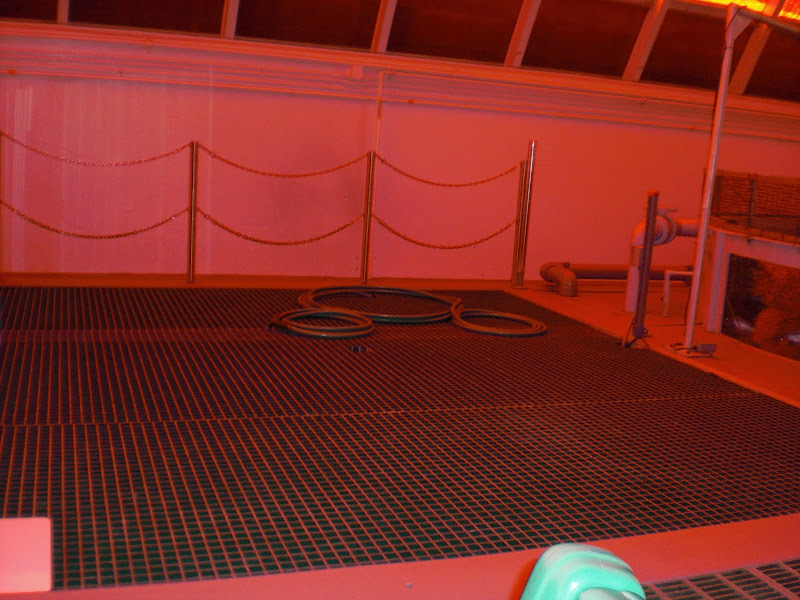 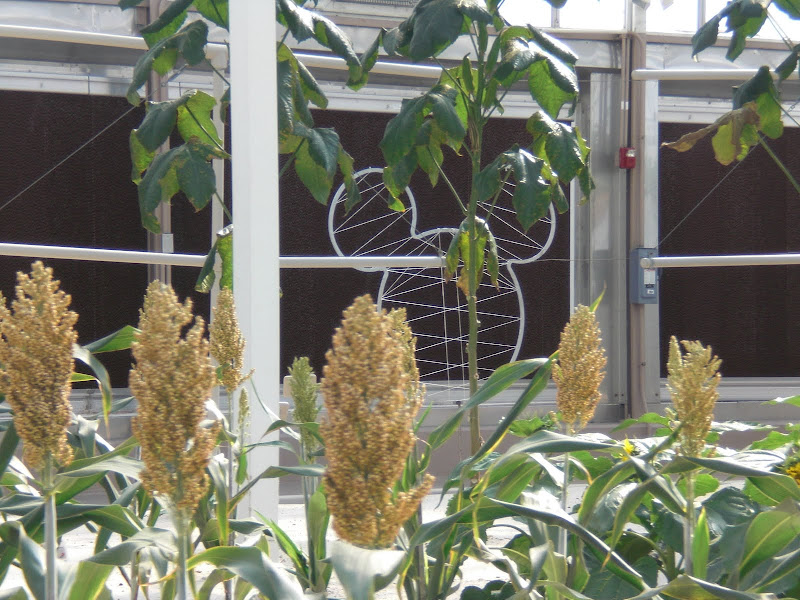 By this point in the day, we were sunburnt and fatigued, so we decided to call it a day. I paused in Innoventions plaza to take this picture: 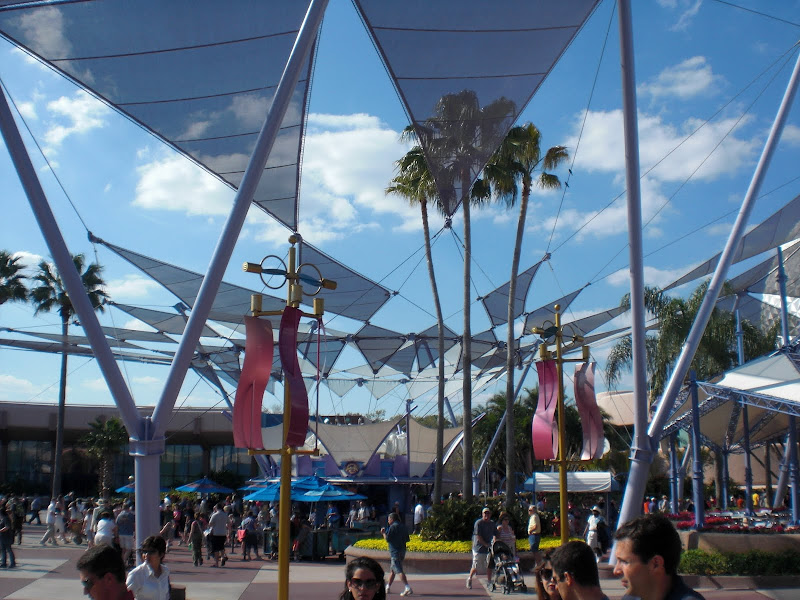 I included this picture for two reasons:

My wife ducked into Mouse Gear to shop a little before we left, and I got this picture of the corpse of Dreamfinder’s Dreammobile. 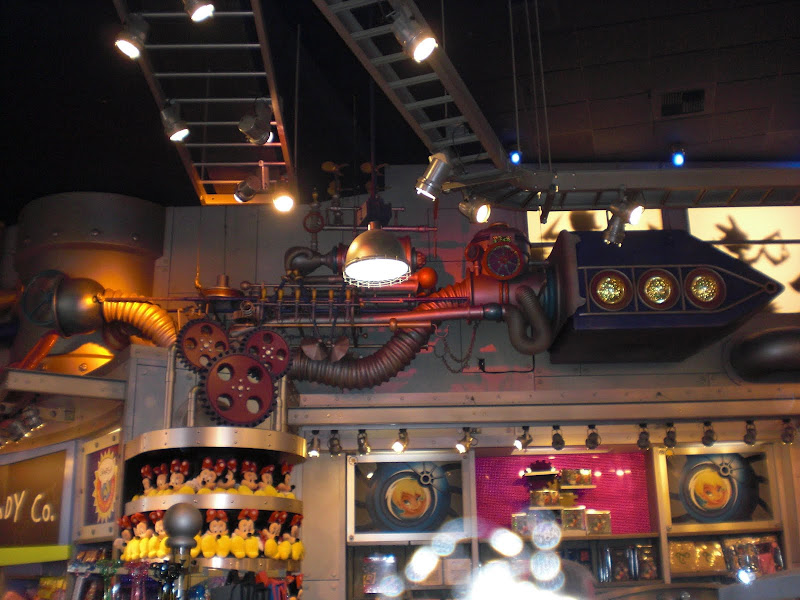 As we headed for the exit, I pasued one last time to take this image of the giraffe topiary outside Project Tomorrow. 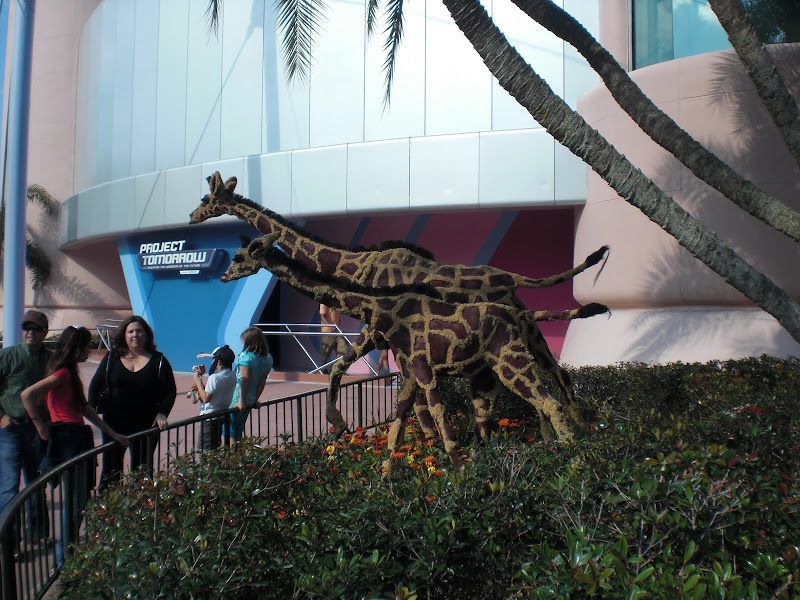 There were many, many other Disney character topiaries scattered throughout Future World and the World Showcase, but it was impossible to get a good shot of them because because of how crowded it was. However, I’m sure that there are some very nice pictures of them elsewhere on the Internet, taken by photographers much more capable than myself.

I hope you enjoyed this little pictorial. Thanks for reading!

Today is March 22, and you know what that means, right? Right?

Well, yes, it is the day after March 21, but that’s not what I had in mind. Yes, it’s Monday, but that, alas, is also not what I was thinking of.

Today is one of the most important days of the year: it’s International Talk Like William Shatner Day. Since this most important observance was only instituted last year, I can understand why you may not have heard of it. However, it was instituted by no less an authority than Maurice LaMarche, the voice actor who provided the voice of Brain in Animaniacs and Pinky and the Brain.

So, I encourage you to celebrate by dusting off your Shatner impression. If you need some pointers on how to best imitate Mr. Shatner, check out this handy guide that Maurice LaMarche provided for the first International Talk Like William Shatner Day: 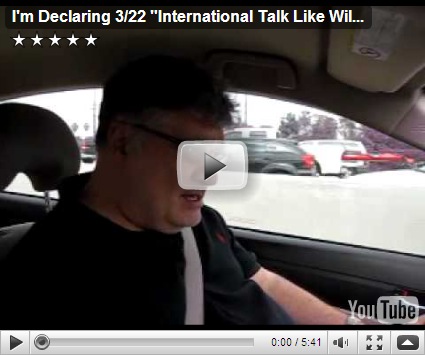 Armed with this information, why not apply your Shatner impression to something unique? For example, you could recite classic Darth Vader quotes (Youuu . . .DON”T KNOW the . . .POWER . . . ofthedarkside!) Or you could read Dr. Seuss as Mr. Shatner might (Iiii . . .do not . . .LIKE . . .greeneggsandhamIdonot . . .LIKE THEM . . .SamIAm.)

That’s all for today. I spent Saturday afternoon at EPCOT checking out the Flower and Garden festival, and at some point this week I’ll upload the pictures I took and post them here.

Outside the sci-fi and Disney geek communities, the passing of artist extraordinaire Robert McCall on February 26 sadly did not garner a whole lot of notice. The general public, it seems, it far too interested in Kardashians and people named “Snooki” to notice someone with actual talent.

And boy did Robert McCall have talent. His futuristic paintings were so unique that you knew who the artist was as soon as you saw them. Although McCall produced artwork for a few Hollywood productions, most notably 2001, Star Trek: The Motion Picture, and Disney’s The Black Hole, I believe that his influence on filmed visions of the future should be much stronger than it is. Tell me, what do you think of when you envision a futuristic city? Probably something like this: 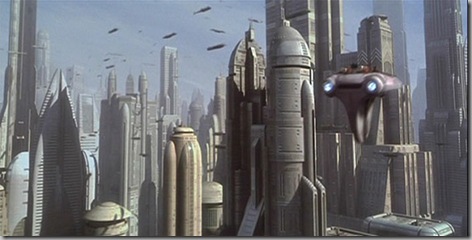 Why do all futuristic cities we see in movies look like this? Because that’s what Blade Runner looked like, and it was so visionary that it influenced an entire generation of artists. I don’t mean to denigrate the hours of painstaking work it takes create something like this and make it look real when it’s shown on a movie screen, but I believe that the Blade Runner aesthetic has been done to death and it’s time for something different. When Robert McCall started painting his particular brand of futuristic landscape, the technology didn’t exist to render them onscreen in a suitably realistic manner, but times have changed. Isn’t it time for the futuristic cities we see in the movies to start looking like this: 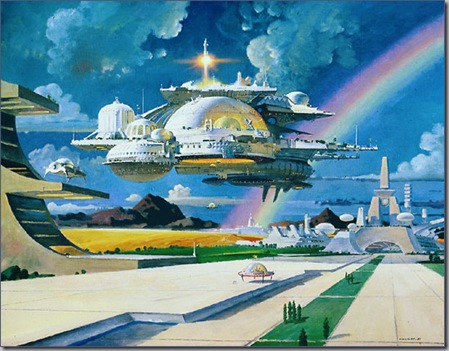 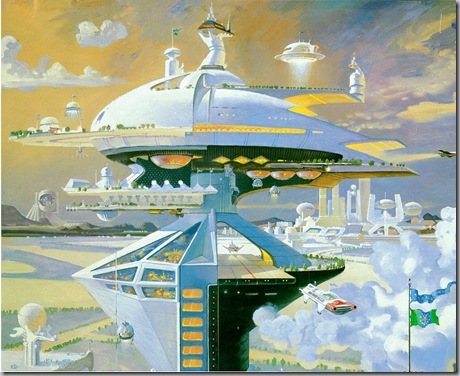 Instead of continuing to borrow from Blade Runner, I think it’s time for Hollywood’s art directors to start borrowing from Bob McCall. Granted, they’d probably have to pay money to his estate for the privilege of using his designs, but it would be money well spent. And wouldn’t McCall’s vision of the future becoming the “default” one in the minds of the moviegoing public really be the ultimate Robert McCall tribute?

Is it time to let EPCOT’s dolphins go?

The tragic killing of a Sea World employee by an orca recently has inspired a lot of soul-searching over whether or not keeping large cetaceans like orcas and dolphins in captivity can really be justified.

Florida has a long history of this kind of thing: the state’s first theme park, Marineland, practically invented the trained dolphin show. Back then, of course, the American public’s view of the proper treatment of animals was very different. The average person didn’t see anything wrong with capturing wild animals and forcing them to do tricks, much as previous generations had seen nothing wrong with owning other human beings as slaves.

Today, things are different. Now we know that wild cetaceans are highly social creatures with a range of thousands of miles. Ripping them away from their social group and trapping them inside a tank, even one as large as the tank inside EPCOT’s Seas pavilion, would be like sentencing a human to solitary confinement in a cell the size of a phone booth. I grew up in St. Augustine, Florida, near Marineland. An family friend who once worked there told us about a female dolphin at the park who repeatedly became pregnant, then drowned her calf when it was born. She was eventually tagged and released back into the wild. They kept track of her, and when she became pregnant again she did not drown the newborn. Had she killed the previous calves because she didn’t want them to spend their lives in captivity? Or had her captive condition induced some kind of mental disorder that went away once she was restored to her natural habitat? No one knows for sure, but it seems obvious that captivity did not agree with her.

Sometimes, there are good reasons to keep animals in captivity of some sort. Ocala’s Silver Springs park, for example, has an area devoted to wild birds who were injured and are no longer able to survive in their natural habitat. Other animals are endangered by poaching or the destruction of their habitats, and the zoos that keep them do their best to give them as close to a natural environment as possible, while also educating visitors about the challenges the animals face. Disney’s Animal Kingdom does a good job in this regard.

Sometimes, though, we make the mistake of anthropomorphizing animals. Dolphins mouths are fixed in what to us looks like a permanent smile, so we assume they’re happy. But the next time you’re at EPCOT, watch the dolphins as they rapidly circle the tank and ask yourself, are they really smiling? Or is their confinement driving them mad?