The Axanar Meltdown II: The Moltening

I generally don't get involved in Internet controversies. I just don't have the time. But, for years I've enjoyed some of the Star Trek fan productions out there, especially New Voyages/Phase II and Star Trek Continues. And I was initially excited about Star Trek Axanar. I even donated $25 to one of their crowdfunding campaigns. And then everything went straight to heck.

First, Axanar managed to get itself sued by CBS and Paramount. You'd think that producer Alec Peters and his followers would immediately do whatever was necessary to keep this huge multimedia conglomerate from crushing them like a Fudgesicle under a steamroller, but throughout all of this they've remained defiant, even launching a countersuit against CBS/Paramount. And after months of waiting for the other shoe to drop, in June CBS and Paramount released a list of Star Trek fan film guidelines that close the door, not just on productions like Axanar, but also on my two favorite fan productions New Voyages and Continues.

While the official Axanar Twitter account was retweeting anyone who pledged to boycott official Star Trek productions because of the lawsuit or the guidelines, Vic Mignogna of Star Trek Continues published a very classy statement shooting down calls for any such boycott and reminding fans of CBS and Paramount's intellectual property rights. I was annoyed that Axanar's recklessness and profiteering was going to bring an end to fan films as we've know them, so I fired off this tweet:

I was just venting. I never expected any kind of reply. But my tweet must've touched a raw nerve with Alec, because he initiated a conversation with me via direct message. What follows are screenshots of the full conversation, with only one redaction (which will be obvious when you see it). I've debated posting this, but some folks have expressed interest. And I think it's important to see how Alec behaves when he's backed into a corner by logic. Make of it what you will. 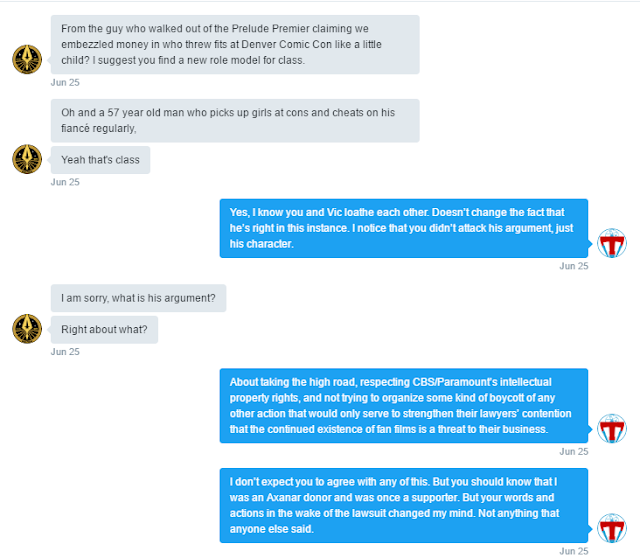 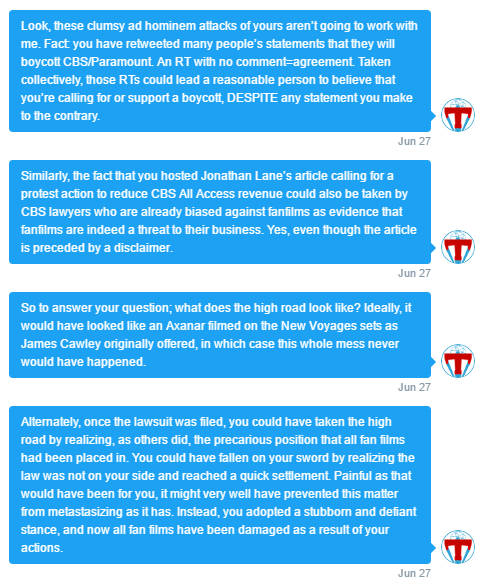 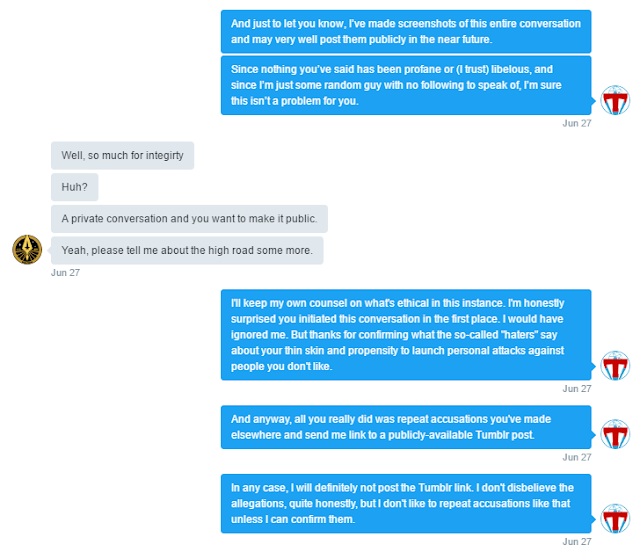 One bit of clarification: my statement that I don't disbelieve the allegations made about Vic Mignogna means that I have no evidence that they're true or false. They are, however, utterly irrelevant to the topic of Star Trek and intellectual property rights.
Posted by David Landon at Monday, August 08, 2016
Email ThisBlogThis!Share to TwitterShare to FacebookShare to Pinterest
Newer Posts Older Posts Home
Subscribe to: Posts (Atom)