Since Star Trek: Discovery premiered back in September, lots of people have been recapping and analyzing each episode as it comes out. (I highly recommend the recaps Andi from the Women at Warp podcast has been doing--you can find them here) I really admire people who can turn out thoughtful and funny material on a weekly schedule. I wish I was one of them, but I'm not. So rather than analyze every single episode, I thought I'd use the midseason break to look back at the show so far and discuss a few different aspects of it.

When I was a kid, some of my favorite toys were Lego sets like this one: 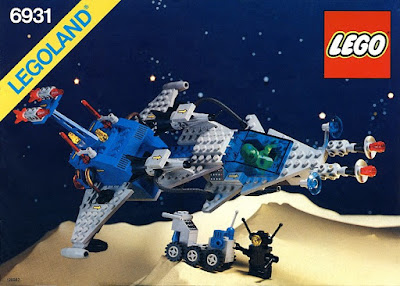 It can be fun to follow the instructions and build the thing pictured on the front of the box, but maybe the best thing about Legos is putting the pieces together in new and interesting ways. Now, imagine you had a friend who yelled at you whenever you used the pieces of your Lego set to build anything other than the picture on the box. That's what a noisy minority of Star Trek fans are like.

Right now somebody's saying "But I never stopped watching it!" Yeah, and a few people bought M.C. Hammer albums after 1991, too. Just not enough to matter. Having your preferences ignored by a huge multimedia conglomerate might hurt your feelings, but there it is.

Many of these angry fans have focused their ire on CBS's decision to put Discovery on the CBS All Access streaming platform. I've read many of their arguments on the subject, and they all boil down to this: 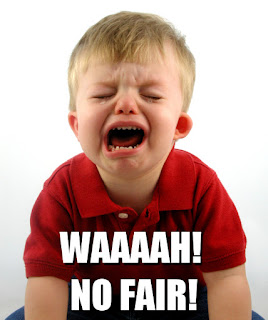 Perhaps you think I'm being unfair. So I've prepared a Q&A based on actual statements I've seen online since the day we learned that Discovery would be exclusive to CBS All Access.


Q: Star Trek has never been behind a paywall before. It's not fair.

A: From 1979 - 1986 the only new Star Trek productions were movies. Movie theaters charge admission. There was a literal wall between you and Star Trek that you had to pay money to get past.

Q: No, you idiot! I mean televised Star Trek has never been behind a paywall before!

A: That's because the last Star Trek show went off the air in 2005. Streaming services weren't a thing then.

A: That's because their business plan at the time was to use Star Trek to prop up UPN. (I didn't say it was a good plan.)

Q: But fans in Europe get to watch Discovery on Netflix! And in Canada it's airing on a cable channel!

A: How very perceptive of you to notice that things are different in other countries.

Q: But CBS is extorting the fans by charging them to watch Star Trek!

A: Charging a market-comparable price for a product people want isn't extortion. It's capitalism.

Q: It's a matter of principle! I'm philosophically opposed to paying for Star Trek!

A: What's that I see on your Facebook wall? It's a picture of your huge collection of Star Trek merchandise worth thousands of dollars! If you're willing to drop $5,000 on a replica phaser rifle, is a $5.99 subscription really the hill you want to die on?

I could go on, but you get the idea. The people who are still mad about CBS All Access are the same folks who believe that the right to free Star Trek was why George Washington fought Nazi T-Rexes in the Civil War. Streaming services are a big deal now. CBS saw how Netflix, Hulu, and HBO used original programming to lure subscribers, and they wanted a piece of that. The promise of new Star Trek was the best way to get it. As my high school economics teacher used to say, nobody is in business because they love you.

I believe All Access is the best place for Discovery. Network TV is very much a quantity-over-quality business. We'd get a longer season if the show was on broadcast TV (26 episodes instead of 15) but given the more hectic schedule and tighter budget, not all of those episodes would be good. And there's no way the show would be as lavishly-produced. The last genre show to air on CBS was the first season of Supergirl, and by the seventh episode they were pulling out the old "superhero loses their powers" trope to save money. And because CBS is mainly the network that senior citizens watch NCIS on, Supergirl's ratings weren't high enough to justify its cost and it got moved to the CW.

Now take a show like Star Trek that has more special effects than a superhero show, and everything you see on screen has to be built from scratch. It wouldn't have done any better in the ratings than Supergirl, and it wouldn't work on the CW because too much of the cast is over 30. So it would've been deemed an expensive failure by the CBS suits, cancelled, and we'd go another decade or so with no new Star Trek.  But on All Access, it can be the most popular show on the platform. And we can get 15 really good episodes per season produced at near-feature-film quality.

Ah, but what about those episodes? Are they really good? I'll start to tackle that question in my next post.

There are two surefire ways to get attacked on the Internet. The first one is to be a woman. Whereas a man can tweet "I had a bagel for breakfast" and everyone will just ignore it, when a woman does the same thing several men will take it as an invitation to make crude sexual comments, and perhaps send her a picture of their personal region. And God forbid if a woman should express an opinion, like "The bagel I had for breakfast was delicious." In addition to the crude sexual comments, her statement will attract the attention of self-important guys who will proceed to mansplain to her that bagels aren't nutritious, and they're not really delicious, she only thinks they are because of her small female brain, and if she wanted to be really smart like them she'd eat whatever they eat for breakfast.

The other way to get attacked on the Internet is to express optimism about something the Internet has already decided will be bad before anyone's even seen it, like the latest DC cinematic universe movie. What the Internet really likes to do is decide in advance that something will be bad, list all the reasons why it'll be bad, and then after it comes out pronounce it to be bad for those reasons even if the finished movie, TV show, or video game doesn't reflect them. Why is the Internet like this? Like many things, it's someone else's fault. Specifically, this guy's: No, not former NBA player John Salley, but the guy he's holding very uncomfortably by the crotch: everybody's pal George Lucas. Now, George Lucas is an objectively good human being. He donates generously to charity. He says he wants to be remembered, not as a great filmmaker, but as a good father. But he's responsible for a lot of this Internet meanness, because he spent the back end of the 1990s making a experimental little indie movie. You know the one I mean: 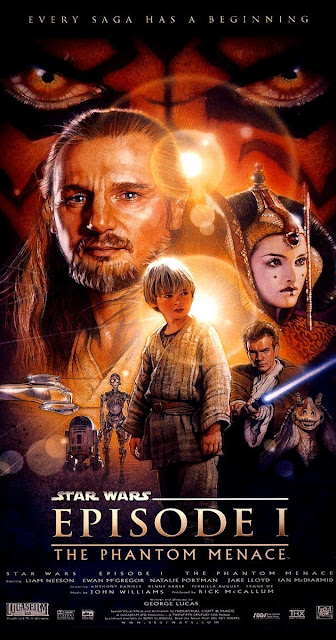 In 1999 everyone was hyped for The Phantom Menace. Heck, I spent all of 1999 under a cloud of ever-worsening depression and even I was excited. We all knew it would be the greatest movie of all time. Darth Maul would be the scariest villain ever, there was something called a "pod race" that was sure to be the most amazing and exciting sequence ever seen on film, and we'd get to see young Anakin Skywalker before he became Darth Vader! That Jar-Jar character looked he might be mildly annoying, but he couldn't be any worse than the Ewoks, right? The Internet was in its infancy then, but nobody on message boards and newsgroups even considered the possibility that Episode I would be bad. That seemed farfetched and crazy, like, I don't know, Donald Trump becoming President!

And then the movie was released. And it was . . . not good. although it took most of us a while to realize it. But by the end of 1999 we had to confront the hard truth that the movie we'd spent years hyping ourselves up for and extolling the virtues of was just not that great. George Lucas was the High Priest of Geekdom, and he'd made us look like gushing idiots in front of everybody.

I really believe that the failure of Star Wars: Episode I was a formative event in the culture of the Internet. Sure, every fanbase has always had a lunatic fringe that proactively hated things before they came out; in the early '80s a group of angry Star Trek fans took out an ad in Daily Variety threatening to boycott Star Trek II: The Wrath of Khan to protest the death of Mr. Spock. But those folks were always just that--a lunatic fringe. These days, they seem to be the dominant voice in many fandoms. Anyone who dares to express optimism for something these people have proactively decided to hate: the Justice League movie, Star Trek: Discovery, risks being shouted down.

If you could time travel back to May of 1999, I think you'd see find these same folks enthusiastically camped out in line for The Phantom Menace giddily clutching their plastic lightsabers. I think that the failure of that first Star Wars prequel (and its two siblings) to live up to peoples' hopes and dreams turned some of them into irredeemable cynics. Now it's almost impossible to make a new Superman or Star Trek without attracting an army of proactive Internet haters because these people care about those properties a lot more than they care to admit. They want to like them, but they got burned by The Phantom Menace. And so they proactively hate on them, imagining this makes them look like wise Internet sages who are immune to slick Hollywood marketing.

Sometimes I wonder if some corners of the Internet might be a little kinder if The Phantom Menace had been the magnum opus we all thought it would be during those first few months of 1999. Maybe not. But we'll never know.
Posted by David Landon at Friday, November 03, 2017 0 comments
Email ThisBlogThis!Share to TwitterShare to FacebookShare to Pinterest
Labels: Star Wars
Newer Posts Older Posts Home
Subscribe to: Posts (Atom)