As incredible as it seems, there were other things going on in 1960s pop culture besides Star Trek. For example, these guys: 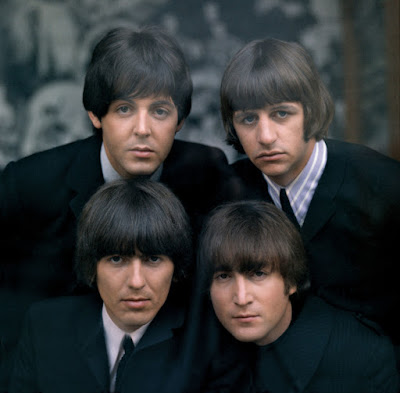 The Beatles were kind of a big deal in the '60s, in much the same way that dinosaurs are a big deal in Jurassic Park. Since Star Trek was a product of that decade, it was inevitable that someone in the cast would have a Beatle-esque hairstyle. 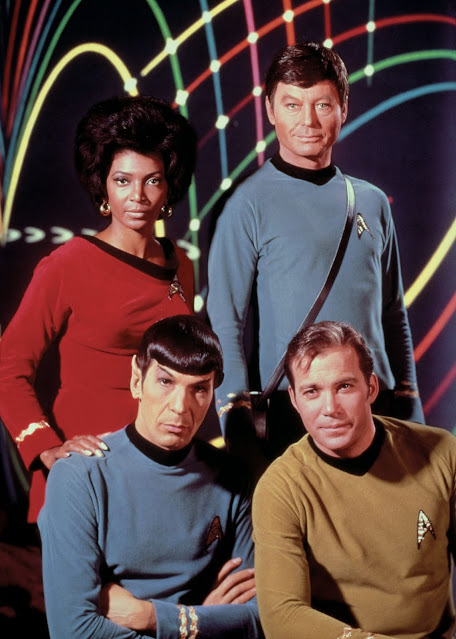 You see, Gene Roddenberry or whoever made the decision about what Spock's hair should look like wasn't thinking "This is the official haircut of the planet Vulcan." Leonard Nimoy had straight hair, and this was a contemporary style that looked good on him.

Fast-forward to 1977. The studio was gearing up to revive Star Trek as the cornerstone of their Paramount-branded TV network that was supposed to launch in 1978. Leonard Nimoy refused to sign on, so a new, younger Vulcan character named Xon was created and actor David Gartreaux was cast in the role. In the surviving footage of the screen tests for Xon, the character has a very 1970s look: 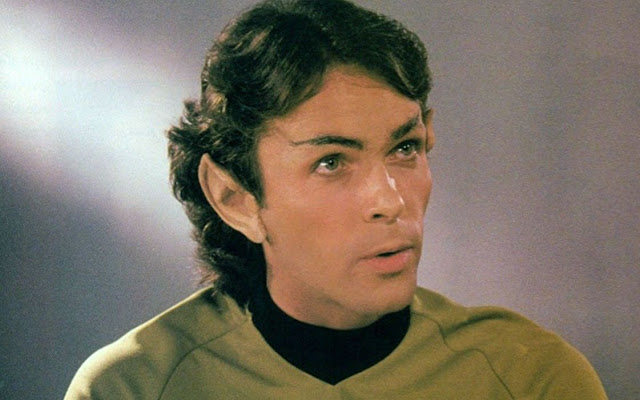 Of course, Xon didn't get to join the rest of the cast in their jump to the big screen. Robert Wise was insistent that you couldn't have a Star Trek movie without Mr. Spock, so Leonard Nimoy was brought back after all. And although the rest of the Star Trek cast had appropriate 1970s hairdos to go with their disco pajama costumes, Nimoy was still sporting the same look he had in the '60s. It's a little strange when you think about it. They didn't put Grace Lee Whitney in her 1960s beehive, after all. And despite also rocking a Monkees-esque 'do on the TV series, Walter Koenig appeared in the movie with a more appropriately-1970s Brick Tamland look. 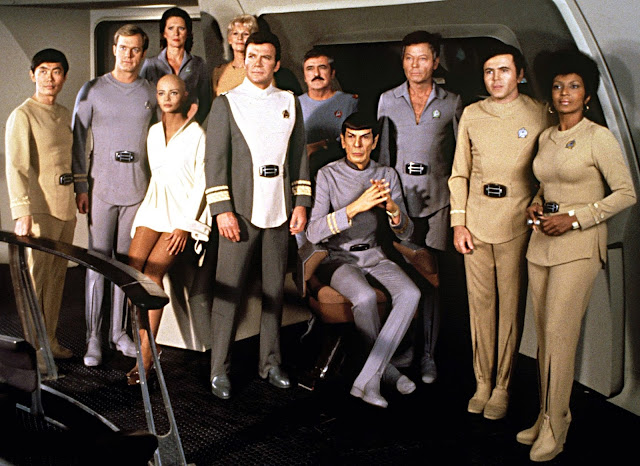 But Spock wasn't the only Vulcan in the movie. In a scene at Starfleet Headquarters near the beginning of the story we meet the refitted Enterprise's original Science Officer, ill-fated Commander Sonak:

And it's here where the franchise starts down the path of the "All Vulcan Men Look Like Spock" cliche. You could argue that Sonak's assignment to the Enterprise sprang from Kirk's irrational desire for everything to be just like it was on his first 5-year mission, and having him look kind of like Spock was intended to be a subtle visual cue to Kirk's mental state.
We didn't see a lot of Vulcans in the other Original Series movies, but we did catch a glimpse of one at the very beginning of The Next Generation's premiere episode. Given that Gene Roddenberry was eager for the show to stand on its own, you'd think that he'd take the opportunity to give the first Vulcan we ever see a slightly different look. Instead, we get Spock Junior. 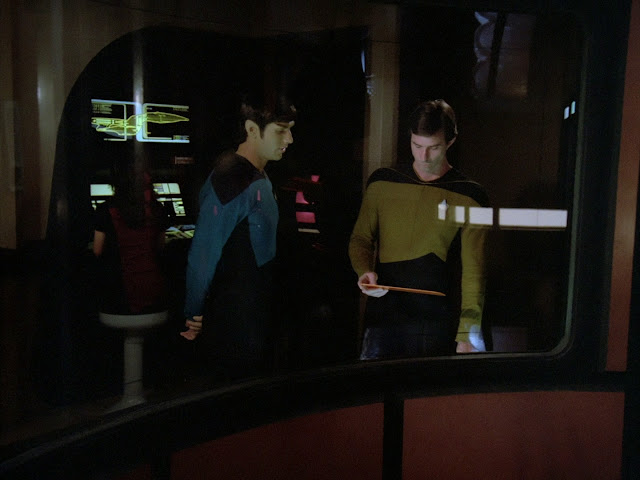 Aside from Suzie Plakson's Dr. Selar in the second season, we didn't see another new Vulcan character until the third-season episode "Sarek". Sure enough, he was also rocking the Spock look: 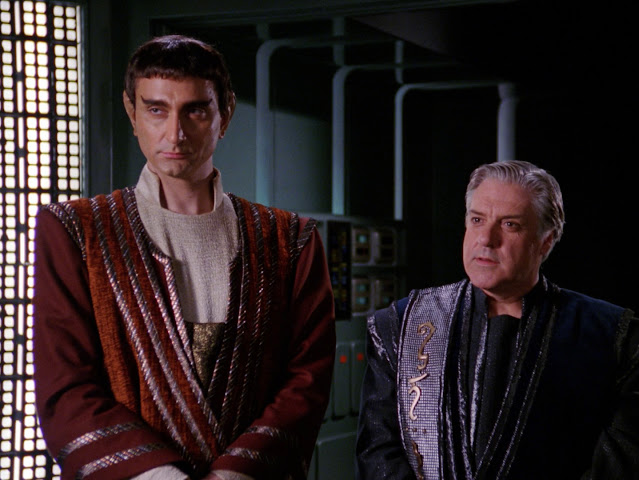 Which is kind of funny, inasmuch as the writers had to fight tooth and nail to be allowed to even mention the name "Spock" in the episode. The Star Trek universe had received a complete visual overhaul since the days of the Original Series, so why was it still clinging to this one very dated piece of the 1960s?
Even worse were the Romulans. It was bad enough that the costume designer decided that their singular fashion motif would be "cartoonishly big shoulderpads". But (no doubt to save money and time on makeup) every Romulan we ever saw on the TNG-era shows--male or female, military or civilian, young or old--had the exact same Moe-from-the-Three-Stooges hairstyle: 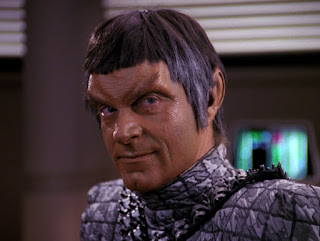 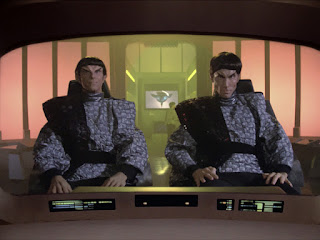 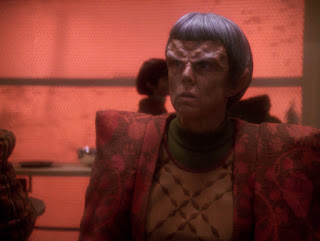 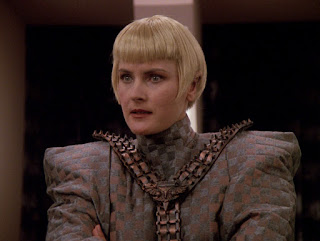 And the few times we saw Vulcans on Deep Space Nine the makeup people just slapped a leftover Romulan wig on them: 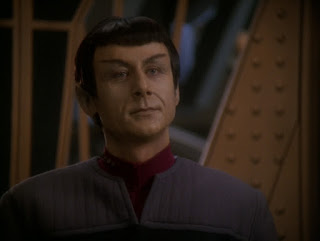 Of course, 1990s Star Trek was made on very tight schedules with TV budgets. And since Executive Producer Rick Berman was aggressively uncreative, he was very strict about never stepping outside established franchise tropes. But after Berman's time with the franchise was over the studio tapped big-name creator J.J. Abrams to reimagine Star Trek as a big-budget blockbuster movie.
Suddenly, nothing was sacred. Matt Jeffries' classic USS Enterprise design was sleekified and amped-up. The interiors were redesigned to look like a futuristic Apple Store (except for the Engineering section, which now looked like the inside of a brewery). And for the first time in decades, our favorite starship's command crew wouldn't be played by a group of aging TV actors. Much like David Gartreaux thirty years earlier, the actor cast as the Vulcan science officer had a good head of hair: 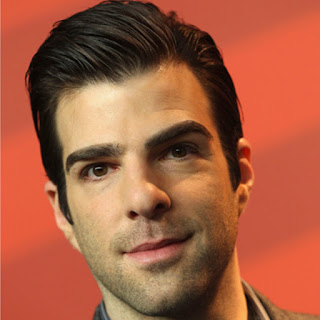 Since the rest of the cast wasn't being forced to adopt the 1960s hairstyles of their TV counterparts, there's no reason to think that J.J. Abrams and his team would saddle Quinto with an embarrassing bowl cut, right? Right? 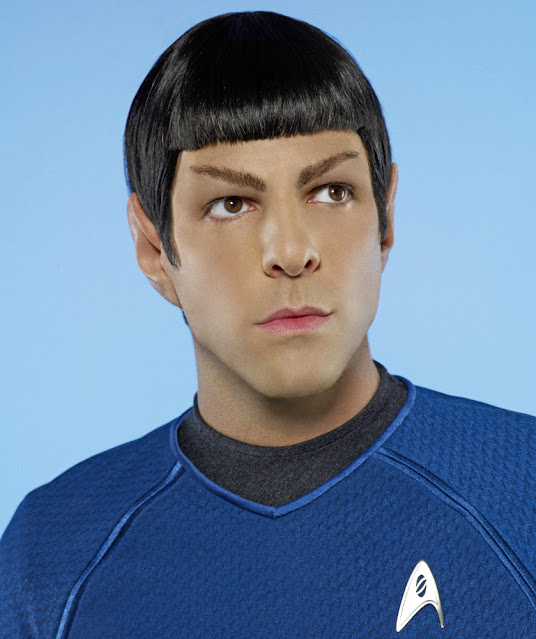 Of course they did! Because how would the audience know it's Spock without his 1960s hairstyle? I mean, we somehow recognized Anton Yelchin as Chekov even though he wasn't wearing a Monkees wig but Spock just HAD to look like Moe from the Three Stooges or we wouldn't know who it was! It's almost as bad as that scene in Star Trek: Nemesis when Picard is looking at a picture of himself as a young cadet and it's Tom Hardy with a shaved head. You can almost hear the clueless executive saying "He has to be bald in the picture or the audience won't know it's Picard, because Picard is the bald Captain."

Fast forward to the present day. Star Trek has again been reimagined (this time with the J.J. Abrams-adjacent Alex Kurtzman at the helm) and once again has angered a lot of old-school fans with its frequent disregard for some of the long-standing Star Trek tropes. They even recast Ethan Peck--another young actor with Hollywood-quality hair--as Spock. 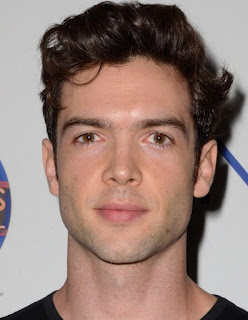 But did they resist the temptation to put a ridiculous Moe wig on him this time? Did the new powers-that-be finally bow to the logic that Vulcan society just might be a more follically-diverse place than North Korea? Maybe, just maybe, did they let this guy keep his perfect hair, put a pair of pointed ears on him, and call it a day? 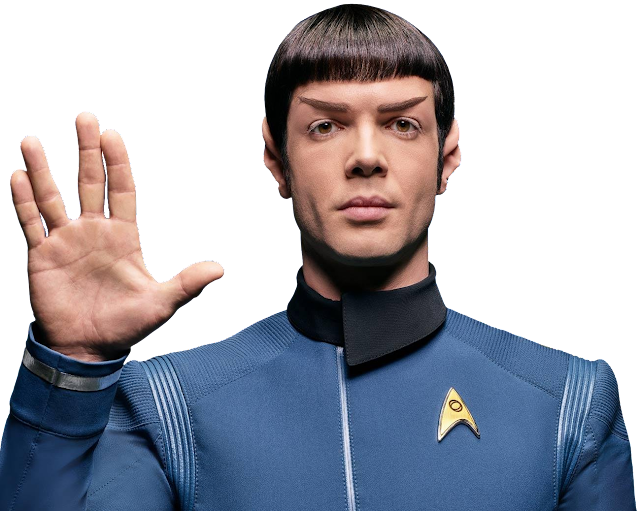 Are we even surprised?

You said it, Doctor.