How I Learned to Stop Worrying and Respect Star Trek: Voyager

When Star Trek: Voyager premiered in January 1995, 16-year-old me was excited for a new Star Trek show. But I also remember being a little worried. During The Next Generation's final season it became obvious that the writers were out of ideas. And now, a scant eight months after TNG's series finale, the same people who worked on that show were launching a new one. Would Voyager's new characters and Delta Quadrant setting be enough to make it fresh and interesting? Or would Rick Berman and the gang fall back into the same old lazy writing and overused plot devices that made TNG's seventh season such a slog?

It was the second one. After an exciting, lavishly-produced premiere, Voyager immediately settled into the same kinds of technobabble mystery plots and time paradoxes and Holodeck malfunction episodes that TNG had already done to death. All the elements that were supposed to make the show different--half the crew being Maquis rebels, having limited power and supplies--were pretty quickly abandoned or minimized. Meanwhile, the writers of Deep Space Nine had gone all-in on character development and story arcs. Voyager just seemed juvenile and lazy by comparison.

Sensing that their audience was getting restless, the Voyager producers planned a big change for Season Four. What would it be? More realistic storytelling? Better character development? Less reliance on technobabble to solve story problems? Of course not! Instead we got this: 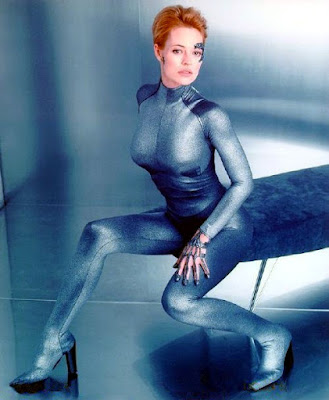 When Jeri Ryan's Seven of Nine joined the crew, I was a nerdy young adult who really liked attractive women but couldn't seem to get a girlfriend. If there was anyone who for whom the sight of a pretty lady in a sprayed-on outfit could cover the show's multitude of sins, it would theoretically have been me. But it didn't work. In fact, I was angry that they thought a woman in a too-tight leotard would distract the audience from the show's obvious quality issues. Did they really think we were that stupid?

I have to give Voyager's producers credit for one thing: they did more than just cast a Laker Girl to wear the catsuit. Jeri Ryan is an amazing actor who landed one of the most difficult roles in Hollywood and handled it with aplomb. I mean, I've never taken any acting classes, but I'm pretty sure that "former Borg drone who was assimilated as a child" isn't a character type they teach you how to play. She's easily one of the best actors Star Trek has ever had; right up there with Patrick Stewart and Leonard Nimoy. I understand why Kate Mulgrew felt so threatened by her. It's not just because of her looks, it's because she was the best actor in the company.

But as good as Jeri Ryan was, the show's writing continued to be lazy and bad. And from what I was reading on the prehistoric Internet, a lot of other people agreed with me. So I stopped watching. I honestly didn't understand how anyone could possibly like Voyager unless they were a little kid or an idiot or something.

Sometime around 1999 or 2000, I joined the TrekBBS (kids, ask your parents). I never visited the site's Voyager forum; I had nothing nice to say about the show, so why bother? But in the site's "lounge" areas where people socialized and played silly games, I encountered a lot of really smart and fun people. And a lot of them were Voyager fans. So I suppressed my instinct to immediately say "You like that show? What are you, stupid?"  and I just listened to what they had to say.

And I finally got it.

Voyager was (and still is) a rarity on television: an action-adventure show where the women are the ones giving orders and figuring out solutions to problems. Nobody talks over Captain Janeway in a meeting, or implies that B'Elanna Torres isn't smart enough to solve engineering problems because she's not a man. And none of the women--not even Seven of Nine in that ridiculous sparkly catsuit with built-in high heels--were there solely to serve as eye candy.

For years Star Trek fans pointed to the occasional guest appearance by a female Captain or Admiral or the handful of times that Dr. Crusher got to do something interesting as proof of the franchise's commitment to gender equality. But Voyager finally gave women and girls characters that they could identify with in the same way that boys and men identified with Kirk, Spock, McCoy, Picard, Sisko, and the rest.

Yeah, Voyager isn't perfect. It was hamstrung by clueless UPN executives and writer-producers who frequently seemed bored with Star Trek (Brannon Braga. I'm talking about Brannon Braga.) But in the end, it did what the best Star Trek has always done: inspire people.