The Star Trek: Discovery Halftime Summation Part 2: Everything Else

Star Trek: Discovery is the fifth new Star Trek show since The Next Generation in 1987. We longtime fans therefore have a pretty good idea of how these things are supposed to go. The two-hour premiere introduces all the characters and sets up the new show's status quo. And then the subsequent episodes give each character some time in the spotlight while exploring different themes in a very episodic way. There's the episode where Wesley Crusher learns about drug abuse, the one where Major Kira confronts a Cardassian war criminal, and the one where Scott Bakula farts around and does nothing of consequence because Rick Berman and friends were totally out of gas by the time they did Enterprise.

Discovery does none of that. Well, almost none of it. The two-hour premiere actually starts out a lot like the other Star Treks. We meet Michael Burnham, Captain Georgiou, and the crew of the USS Shenzhou as they set off on a mission to investigate a Federation communications buoy that's gone silent. Now, since this is a modern TV show we expect a few more "extreme" moments that earlier Treks would never have attempted. So it's not altogether shocking when the personable young Ensign who mans the Navigator's station on the bridge gets blown into space during a battle with the Klingons. And while Burnham's attempted mutiny at the end of the first hour is a major turning point, things take a predictable turn when, with ten minutes left in Part Two, she comes up with an idea to capture the Klingon leader and avert a full-scale war. We've seen this kind of thing before on Star Trek, so we think we know what comes next: the plan will succeed, the only consequence of Burnham's attempted mutiny will be a stern talking-to from the Captain, and the Shenzhou will warp off into the end credits.

But instead, everything goes sideways. The plan fails in the worst way. Captain Georgiou gets killed. The crew abandons the lifeless hulk of the Shenzhou, and Burnham gets sentenced to life imprisonment for her mutiny. Roll credits.

And it was hard to escape the promotional artwork that proudly showed off a ship that definitely wasn't the Shenzhou. 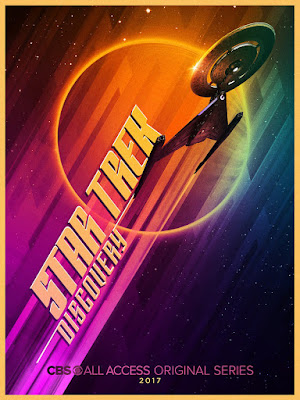 Thanks to the pre-release publicity, the fate of Captain Georgiou and the Shenzhou was only surprising to people who would also be surprised to learn that Guy Fieri dyes his hair. So we sat through the show's first two hours knowing they were only a prequel and the real show wouldn't start for another week. This really frustrated some folks.

And then when the show got started in earnest with episode three, it completely turned its back on the "normal" Star Trek storytelling format. Discovery isn't broken up into tasty episodic chunks that allow you to watch just one episode to get your Star Trek fix. It's an ongoing serialized tale, more like Breaking Bad or Game of Thrones than anything else. And unlike previous Star Treks, where our main characters were always what they appeared to be and even major revelations about them (like the secret of Odo's origin or Bashir being genetically engineered) didn't change who they were as people, there is some strange, dark stuff going on with our Discovery crew. Captain Lorca is shady, manipulative, and seems to have some kind of secret agenda. He may even be from a parallel universe. And the likable Lt. Ash Tyler is almost certainly some kind of Klingon sleeper agent. Overall, the Discovery crew is not the happy family of characters that every other Star Trek has given us. And that's a dealbreaker for some people.

There's a small-but-vocal group of fans who proclaim that Seth McFarlane's The Orville is the "real" Star Trek. After all, it has a likable family of characters on an open-ended mission to explore the galaxy one episode at a time. It's done stories on on gender identity, social media, and facing your fears. More than one episode has commented on religion in very Roddenberrian way.  Now, I'm not going to bash one show and praise another.  The Internet likes to reduce everything to an either/or proposition. Either Discovery is the Real Star Trek and The Orville is a bland copy, or The Orville is the True Heir to Roddenberry's Vision and Discovery is raping his memory. It seems almost heretical to say you enjoy both shows for different reasons.

When the box-office failure of Nemesis and the cancellation of Enterprise ended Rick Berman's tenure atop the Star Trek franchise, most of the fans were glad to see him go. We all thought it was time for a different creative team to take over and do something new with Star Trek, rather than just recycle the same old stuff over and over. Well, that's what the folks behind Discovery are doing. Whether you like the show or not, you've got to admit that there's never been a Star Trek like it.

While some older fans are upset that Discovery is gleefully slaying their sacred Star Trek cows, a lot of younger fans are really into it. They even got the show renewed for a second season. (Yes, The Orville got picked up for a second season as well, which just proves that there's merit in both shows' approaches.) The whole reason Star Trek survived its cancellation in 1969 was because of the enthusiasm of its mostly-young fanbase. Now it's time for a new generation of Star Trek fans to have "their" Star Trek, the way us older fans had the Original Series or TNG.