Echoes of the Vacation Kingdom

I was going through a shoebox full of old family photos recently, and I discovered a couple relics from some Disney World trips we took in the early 1980s.

First, here’s a parking ticket from April 1981. There’s so much to love here; the classic Walt Disney World logo at the top of the ticket, the sailboat/Contemporary/castle logo at the bottom, and most of all, the 50-cent price. In case you’re interested, when you adjust for inflation that 50-cent parking ticket would cost about $1.25 today. Obviously, the current $14 parking fee represents quite a substantial markup. Of course, back then the Transportation budget did not include maintenance on a large fleet of gas-guzzling buses.

Here’s the back side of the ticket, with a nice map of the Magic Kingdom parking lot: 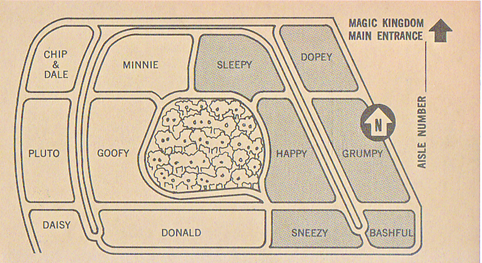 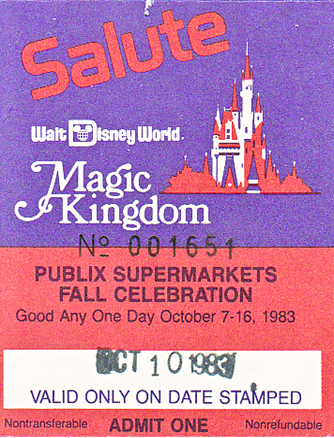 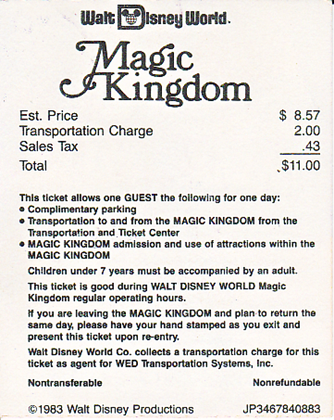 You see, before the Walt Disney Company mushroomed into an international multimedia conglomerate, its Orlando arm wanted to play nice with other Florida businesses. My dad worked for the Lakeland-based Publix Supermarkets, and every year we’d take a trip to Disney World during the period when Disney offered discounted admission for Publix employees and their families.

Another interesting factoid: the date stamp on this ticket is October 10, 1983, the day after Disney raised the price of a one-day adult ticket from $15 to $17, making the discounted price of $11 quite a bargain, especially since it included parking. Note that this is after the attraction ticket books were phased out. Imagine paying only $11 for a day in the Magic Kingdom! These days you can hardly get a hot dog at Casey’s for that price.

Park admission was seriously underpriced in the early 1980s, and not long after Michael Eisner took the reins of the company it increased sharply. In fact, between the beginning of 1985 and the end of 1986, the price of a one-day park ticket was raised six times! Those price increases (and the end of the “good neighbor” policy that allowed discounted admission for the employees of some Florida-based companies) effectively put regular trips to Disney World outside of my family’s price range.

Still, I’m glad I got to see the place when it was a smaller, more unique Vacation Kingdom of the World.

On Believability, Intelligence, and Underwater Spaceships

CORRECTION: The below poster for Star Trek Into Darkness is fan-made, and not an official poster from Paramount Pictures.

NOTE: This article contains what some might consider minor spoilers for the upcoming film Star Trek Into Darkness, although it’s not anything that hasn’t already been revealed in trailers and the nine-minute IMAX preview. If you’re studiously avoiding any information about the film until you see it, then bail out now.

Although I have always been a huge Star Trek nerd, I’ve mostly stayed out of arguments about the theoretical capabilities of the imaginary technology it depicts. If you examine the early writers’ guides for the Star Trek series that Gene Roddenberry worked on, you’ll notice that there’s very little concrete information about how things like the transporters, phasers, or sensors work. As you watch the shows and movies, you’ll notice that capabilities of the technology are largely dependent on the needs of the plot. The main concern, emphasized over and over again in those writers’ guides, is believability.

I bring this up because a new poster for May’s Star Trek Into Darkness hit the Internet today: 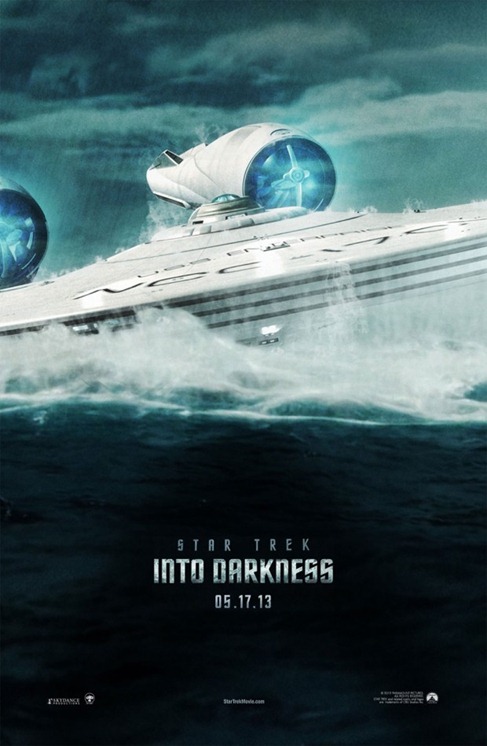 If you’ve seen any of the trailers that have been released thus far or the nine-minute IMAX preview, then you know that at some point near the beginning of the film, the Enterprise is “hiding” beneath the ocean of an alien planet with an atmosphere and gravity similar to Earth, and that it dramatically rises up out of the water and eventually flies off into space in what is sure to be a dramatic and exciting moment in the film.

Isaac Asimov once told Gene Roddenberry that he appreciated Star Trek because, although it broke the rules of physics for dramatic convenience, it did so in a way that was still believable and respected the intelligence of the audience. Of the two big sci-fi franchises, Star Trek has always been seen as the “smarter” one. It’s inspired people to become astronauts and doctors and scientists and engineers. Star Wars is more “fun” in the conventional sense, and I certainly respect J.J. Abrams’ attempts to inject some of that audience-pleasing action and fun into Star Trek. Lord knows it needs it, after the late-90s/early 2000s phase when the franchise devolved into endless scenes of characters pushing buttons and spouting technobabble.

But here is my nerdy problem with the Underwater Enterprise. It’s not that I don’t think the ship could survive underwater without leaking. It’s that the Enterprise has always been a huge spaceship that was designed to work in space only. It’s not supposed to be able to land on a planet. A ship that’s shaped like the Enterprise simply couldn’t maintain its structure under Earthlike gravity. Those skinny pylons wouldn't be able to support the weight of those massive engines. That slender “neck” wouldn’t be able to support that broad, massive saucer. And anyway, how’s it supposed to be able to gently coast down through the atmosphere, land in the water, and then lift back off into space again? The only reason for this is because writers Roberto Orci and Alex Kurtzman (the same crack team that gave us a giant desert behind Washington D.C.’s Air and Space Museum in Transformers 2) thought it would look cool.

And I’m sure it will. But it’s not believable. I’m certain there were other ways to accomplish whatever level of drama and action the scene is trying to achieve without sacrificing that believability that’s always separated the best Star Trek from its less-intelligent brethren like Star Wars or Lost In Space, and once I see the movie I’ll be able to come up with a half-dozen or so.

At this point you might be saying “Dave, you’re overthinking this. Just turn off your brain for two hours and enjoy the movie!” But one of the things that makes Star Trek special is that you don’t have to turn off your brain to enjoy it. To misquote Captain Kirk, I don’t want my brain taken away, I need my brain!

I’m sure Star Trek Into Darkness will be an enjoyable movie. And I’m sure that scriptwriters Roberto Orci, Alex Kurtzman, and Damon Lindelof have peppered their script with classic Trek references just for geeks like me. It’s just a shame that, in the process, we have to lose some of the intelligence and believability that one of the granddaddies of science fiction, Isaac Asimov, enjoyed so much.