I saw my first Herb Ryman painting when I was six years old: 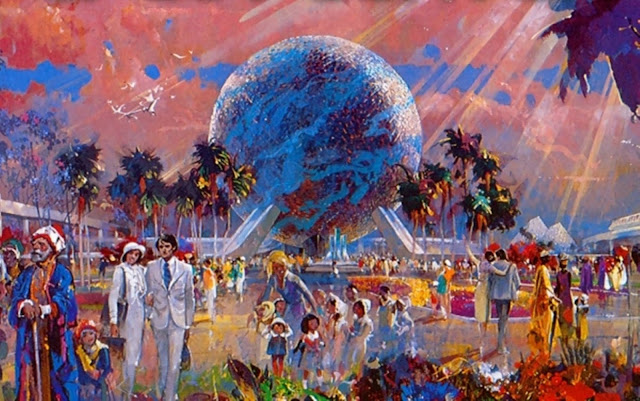 It appeared as a beautiful two-page spread in the definitive EPCOT Center bible, Richard Beard's Walt Disney's EPCOT-Creating The New World of Tomorrow. The book was a present from my grandfather, one of the best he ever gave me. While the gorgeous Robert McCall paintings from the Horizons chapter more strongly stirred my imagination, something about the Ryman painting compelled me. It wasn't until I saw more of his work a couple decades later that I realized what it was. 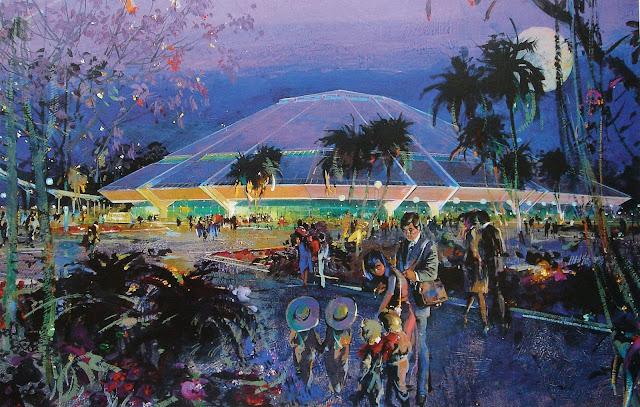 It was the people. In most theme park concept art, the people are hastily-sketched smiling figures excitedly pointing at or running towards the attraction that's being depicted, sometimes while clutching a piece of tie-in merchandise. Their only function is to provide a sense of scale while communicating the idea that the proposed attraction will be a fun (and profitable) place.

But in Herb Ryman's pictures, the people communicate something more. They convey the idea of EPCOT Center as a place where people from around the world don their finest clothes to learn about the future and immerse themselves in the cultures of the planet we share. It reminds me of how my grandfather used to wear a suit whenever he took a plane trip. He came from the era where flying was a special occasion. And for special occasions, you dressed up.

In the alternate universe Herb Ryman painted, a visit to EPCOT Center was very much a special occasion. And Florida somehow had no heat or humidity, so a man could stroll its unshaded expanses in a three-piece suit without breaking a sweat, and a woman could walk the entire park in a dress and high heels with zero discomfort. But more importantly, it was an alternate reality where people would actually come from all over the world to partake of the feast for the mind that EPCOT Center offered. I've said before that the main reason EPCOT Center failed to do as well as the pre-Michael Eisner Disney hoped was that it eschewed thrill rides and engaged your brain on a higher level, whereas the average theme park visitor doesn't want their brain engaged on any higher level, they want it engaged on the level that makes them sorry they had lunch at Pizza Planet.

I think a big reason why the world Herb Ryman depicted is so alluring to we EPCOT Center nostalgists is that it's a place where science, learning, and the appreciation of cultures other than one's own are highly valued. It's a more refined place, one that we feel a keen homesickness for even though it never really existed. But when we look into those paintings and imagine ourselves there, we hope that someday, somehow, it will.
Posted by David Landon at Friday, February 03, 2017 2 comments
Email ThisBlogThis!Share to TwitterShare to FacebookShare to Pinterest
Labels: EPCOT Center, Herb Ryman
Newer Posts Older Posts Home
Subscribe to: Posts (Atom)