First of all, I want to thank all 44 people who voted on the poll concerning the blog’s recent visual overhaul. Three-quarters of you liked the new look, so it will stay. If anyone has any suggestions on how to improve things, please fire away in the comments. Now, on to today’s topic:

The future is never what we imagine. Sometime in the mid-80s, my parents bought my sister and I a set of educational National Geographic books. One of them, entitled Science-It’s Changing Your World, contained this picture of a kid playing a futuristic videogame: 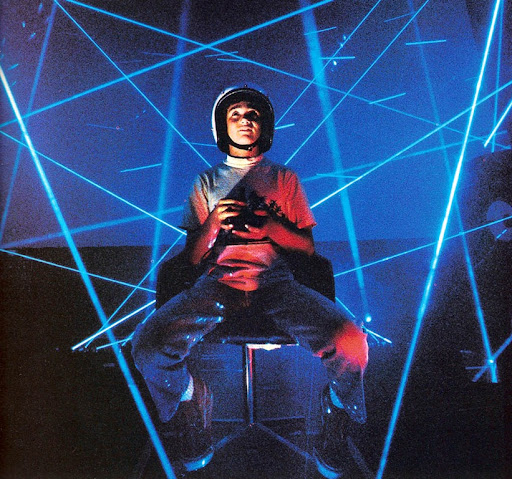 I have absolutely no idea how this game was supposed to have worked (I think it involved lasers) or why the kid was wearing a motorcycle helmet, but it looked so futuristic, like TRON! I was sure that, by the time I was in high school, I would be able to go down to the local arcade and play the Laser Pod Game for myself.

By the time high school rolled around in the early-90s, I had forgotten all about the Laser Pod. Instead, I was anticipating the newest Big Thing That Was Just Around The Corner: virtual reality! As crazy as it sounds, we spent most of the ‘90s believing that the future of video games looked like this: 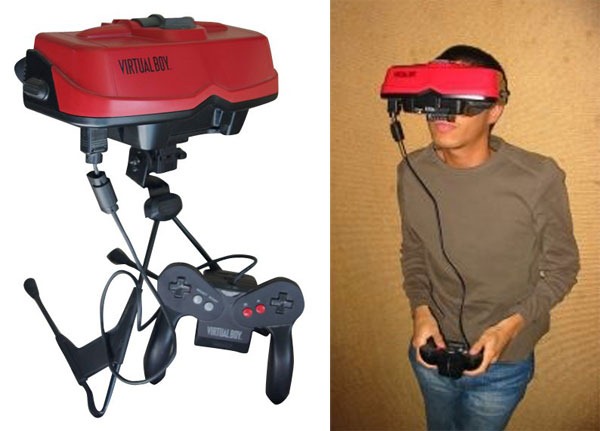 Which is why I wasn’t one bit upset when I learned that EPCOT Center’s CommuniCore was being replaced by something called Innoventions. In the beginning, Innoventions was advertised as the place you could test drive all the new technologies that were about to revolutionize our lives, including virtual reality. Because I was young and stupid, I assumed that this was EPCOT’s way of taking the first step into the New Millennium. I imagined that, on future EPCOT visits, I’d spend some time playing with the virtual reality in Innoventions, then head out to ride updated, plussed versions of Horizons, Journey Into Imagination, and World of Motion.

And just like we arrived in the 1990s without Laser Pods at our local arcades, the Innoventions of 2011 is significantly less exciting than we imagined it would be. Excepting the Sum of All Thrills exhibit, it seems more geared to showcasing stuff we already have in our living rooms. 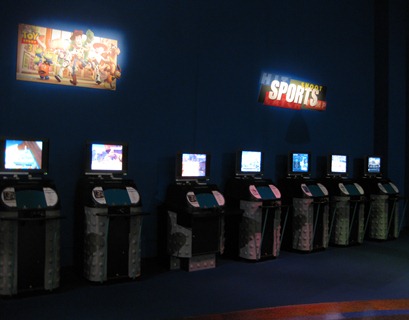 Also, the place seems largely empty. Imagine how Future World would look if every sponsor-less pavilion got bulldozed. Clearly, Innoventions needs some fun, permanent exhibits that aren’t dependent on corporate sponsorships. For example, a Horizons simulator.

This is not a farfetched idea. The guys behind WEDCon are already building one that could easily fit into one of the larger plots of empty exhibition space. And Chris Wallace, the guy behind the Horizons Resurrected project, is in the midst of creating a virtual reality version of everyone’s favorite lost EPCOT pavilion that could be utilized in a much smaller space, like where the Wall O’ Playstations currently resides. It would be Disney’s favorite type of attraction: a relatively inexpensive, permanent exhibit that, aside from regular maintenance, never needs any costly upgrades. (Okay, that’s not completely true. Disney’s favorite “attractions” are actually revenue generators like gift shops and character Meet-and-Greets)

Over the past year or so, little things have been happening at the park that delight EPCOT Center fans. Universe of Energy was returned to its old exterior color scheme, the painted monoliths on Spaceship Earth’s legs were removed, the Fountain of Nations got that cool new railing, and the whirlygigs are disappearing from Innoventions plaza. Clearly, someone with decision-making authority at the company has at least a passing affection for old-school EPCOT. So why not a Horizons simulator, or maybe a 21st century refresh of old CommuniCore exhibits like Energy Exchange? Not only would it make people happy, but it could fuel an expansion of the extremely popular line of retro EPCOT merchandise.

So come on, Disney. You know this needs to happen. In fact, I am willing to throw a little something in. Remember how I once promised to publicly embarrass myself before the whole Internet if the Imagination pavilion ever gets a worthy overhaul? That promise still stands, but now I’m going to add to it: if a worthy Imagination overhaul happens OR if Innoventions gets a Horizons simulator, I will celebrate like a crazed chipmunk, and said reaction will be posted on YouTube for all the Internet to see. So come on, Team Disney Orlando. Do the right thing. Make me embarrass myself on the Internet.

When EPCOT Center opened in 1982 it was, to put it mildly, kind of a big deal. Disney excels at making even regular occurrences look like big events (the opening of the Magic Kingdom every morning, for example) and for EPCOT they pulled out all the stops. There was a huge publicity campaign, including a grand-opening TV special hosted by Danny Kaye. Take a look: 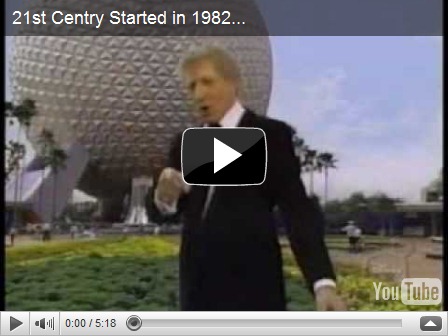 These days the idea of using a showtune to announce the 21st century’s early arrival seems a mite cheesy. However, this was a time when shows like The Love Boat, The Dukes of Hazzard, and Joanie Loves Chachi sat near the top of the Nielsen ratings. It’s safe to say we were on an all-cheese diet.

However, I find this little musical number interesting primarily for the revisionist history it presents. It’s a clean, very Disney-esque narrative: Walt Disney had a dream called EPCOT, and in 1982 it came true. The truth, of course, is that the EPCOT project went through numerous iterations. Michael Crawford at Progress City USA wrote an excellent couple of articles about the many forms that EPCOT took after Walt Disney’s death in 1966 (check them out here and here). The publicity campaign that surrounded EPCOT Center glossed over all that, though, and pretended that the park that opened in 1982 was exactly the thing that Walt had dreamed up back in 1966. No mention was made of the original plan to build a futuristic city on the EPCOT Center site. Almost thirty years later, I assumed that was still the company line.

Interestingly, though, it appears that Walt’s EPCOT city has found its way back into Disney’s official company history. When I took the Undiscovered Future World tour the guide actually mentioned the EPCOT City, but said that it was scrapped because the land was too swampy to support the complex. That’s not entirely true, of course. It was actually Walt’s death that sealed the fate of his Experimental Prototype Community of Tomorrow. However, construction in central Florida has unique challenges. When I lived in Lake City, a shopping center that was less than twenty years old had to be abandoned and demolished because a sinkhole opened up next to it. Sinkholes have swallowed up houses. And plans for the Venetian/Mediterranean Resort, which would have occupied a site between the Transportation and Ticket Center and the Contemporary, had to be scrapped after the land proved to be too swampy to support the structure. So, it’s not outside the realm of possibility that the construction of the EPCOT city might have been complicated by sinkholes and swampy conditions. It’s nice to see Disney admitting that their founder’s vision of EPCOT differed from the park that was finally built.

Maybe in another thirty years they’ll acknowledge the real reason why.

What’s In a Name? (or Acronym)

Recently, I got into a little bit of a Twitter argument (or Twargument) with someone over the “correct” capitalization of the word/acronym EPCOT. Now, I am not the kind of person who enjoys arguing on the Internet. I’m not one of those people on message boards who’s always single-mindedly ranting about things he doesn’t like and attacking people who disagree with him. So, this post is not an attempt to get the last word in a conversation. It’s simply an attempt to explain why I do something (in this case, spell EPCOT in all capitals rather than use the Disney Parks-approved “Epcot” spelling) without being bound by Twitter’s 140-character limit.

There are two ways to look at the EPCOT-vs.-Epcot “issue”. You could point out that the real EPCOT-Walt’s Experimental Prototype Community of Tomorrow, was never built and that the name of the theme park located at Walt Disney World in Florida has been named “Epcot” by the Walt Disney Corporation which owns and operates it. And you would be correct.

I take a different view. Although Walt’s grand futuristic city was never built, EPCOT Center was founded upon the ideals it embodied. Only a small number of people would actually have lived in Walt’s EPCOT; most people would have experienced it as tourists. Concerning his Experimental Prototype Community of Tomorrow, Walt Disney said “I believe we can build a community that more people will talk about and come to look at than any other area in the world.” Why did Walt think the general public would want to visit EPCOT in large numbers? To ride rollercoasters, perhaps? To meet Mickey Mouse? Of course not, that’s what the Magic Kingdom was for. People were supposed to visit EPCOT to be amazed, to be inspired, to go home feeling energized about the possibilities of the real world.

EPCOT Center was not the community Walt envisioned, but it was built with the same purpose: to inspire, educate, and amaze. I believe those things are important. The Disney executives of the mid-1990s disagreed. Lowercase Epcot, to me, represents all the worst aspects of the lowest-common-denominator approach to the park that almost ruined it in the mid-90s to early 2000s. And I refuse to surrender to that.

So I’ll continue to refer to my favorite theme park as EPCOT. Because “Epcot” is a meaningless nonsense word, but EPCOT is the Experimental Prototype Community of Tomorrow. It’s an acronym that still means something to a few people out there. Including me.