Recently longtime Disney Imagineer Tony Baxter was honored with his own window on Disneyland’s Main Street. 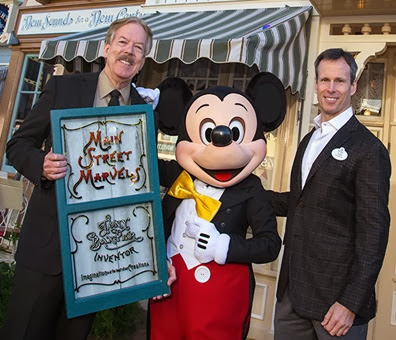 This is a very big deal. Tony Baxter’s contributions to the Disney theme parks are akin to those of Curt Swan to the Superman mythos or Tinker Hatfield to Nike; hugely important, but largely unknown outside the fan community. So it’s great to see him getting public recognition in the form of his very own window on Main Street in Walt’s own park. There’s scarcely a higher honor that the company can bestow on an employee. It’s tempting to look at this as the company (and its executives) formally recognizing and even celebrating the accomplishments of one of the finest Imagineers ever. But make no mistake: what looked like a “thank you for your years of service” ceremony was actually the company’s way of putting Mr. Baxter out to pasture.

Tony Baxter, you see, was a relic from the old days when Disney actually cared about the quality of its offerings. I’m not saying that back in The Good Old Days the company was a nonprofit charity that would never dirty its hands with money. Heck, plenty of people accused Walt Disney of crass commercialism during his lifetime. But Walt imbued his company with a sense of passion for the things it worked on. They didn’t simply make, for example, a movie about Cinderella or a theme park attraction with singing Animatronic birds because a financial analysis said those things would be profitable. They made them because they liked them. There was a visible commitment to quality in everything with the Disney name on it, and that’s perhaps the main reason why Disney is one of the world’s most-loved brands. But that passion and commitment to quality that Walt and the first-generation Imagineers passed on to people like Tony Baxter just isn’t shared by the company’s executive leadership anymore. I’m not just saying that because I’m still grumpy that they tore down Horizons. It’s a demonstrable fact.

Take that piece of news last week that CEO Bob Iger is insisting upon a Summer 2015 release date for the next Star Wars film despite the fact that 2014 is less than two months away and the movie is still in pre-pre-production, with no cast and not even a completed script. It’s virtually guaranteed that the film is going to be a rush job at this point, and it’s really hard to make sure a movie is good when you’re just scrambling to get it out on time. Logically, if Mr. Iger genuinely enjoyed Star Wars and had a firm commitment to making sure that anything with Disney’s name on it was as good as it could possibly be, he’d agree to postpone the film’s release to 2016. Whatever money this decision cost Disney would surely be recouped when J.J. Abrams and friends delivered a finely-tuned Star Wars film for 2016 that didn’t have to share the spotlight with Avengers 2 and the Superman/Batman movie in 2015. But instead he’s sticking to his guns and demanding a summer 2015 release. Why? For two reasons:

Since the next Star Wars is guaranteed to be a financial success regardless of its quality, and Iger won’t be able to take full credit for that success if it happens in 2016, Episode 7’s release will not be postponed no matter how grotesquely behind schedule it is. It could get to the point where there’s no time to do anything other than have J.J. Abrams and a production assistant act the movie out with action figures and make lightsaber noises with their mouths, and Iger would refuse to budge. Short-term profit and political things like who gets credit for what are infinitely more important to today’s Disney executives than putting out a quality product.

My point is that there is no longer any place in today’s Walt Disney Company for people who do things the way Tony Baxter and the first-generation Imagineers who mentored him did. It’s very telling that the newest, most technologically advanced theme park attractions in Florida belong to Universal Studios, a Disney competitor. Meanwhile, the newest thing at Walt Disney World (aside from the annual price increases, of course) is a crowd management/data mining system that makes vacation planning more difficult and attraction lines longer. Tony Baxter was a troublesome reminder of a time when it was heresy to suggest closing a ride or skimping on maintenance to increase profits at an already-profitable theme park. And now he’s gone.

Yes, he has a window on Main Street, along with Walt Disney and the artists and Imagineers who helped him transform “Disney” from some guy’s last name into beloved symbol of childhood innocence and human progress. And just like them, he has no share in directing the company. There are still good people there, of course, and maybe one day they’ll get their names in Main Street windows, too. Meanwhile the marketers, finance guys, and ex-TV weathermen at the helm of today’s Walt Disney Company will continue to slowly run it aground.