Whatever the reason, I got to thinking about which movies in the Disney catalog best capture the essence of the different lands of the Magic Kingdom. And after some deliberation, I came up with a list. Now, there are five Magic Kingdom parks around the world (and Shanghai will make six) and no two are exactly alike. But each of them includes, in some form, Main Street, Adventureland, Frontierland, Fantasyland, and Tomorrowland. That’s why I’ve restricted my movie choices to those areas, and not selected, for example, a Liberty Square movie or a Critter Country movie. So, let’s kick off the Magic Kingdom Movie Marathon with my pick for the quintessential Main Street movie: 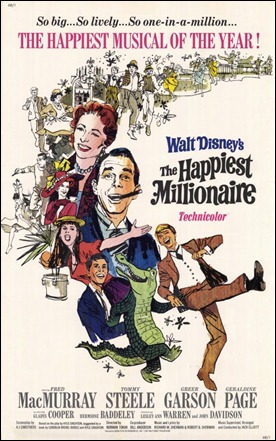 Yes, it’s The Happiest Millionaire. Although it’s set about a decade after the turn-of-the-century period that Main Street is supposed to depict, it still captures that area’s early-20th century exuberance. Some of its music can even be heard as part of the Main Street background loop.

Next up, the Adventureland movie: 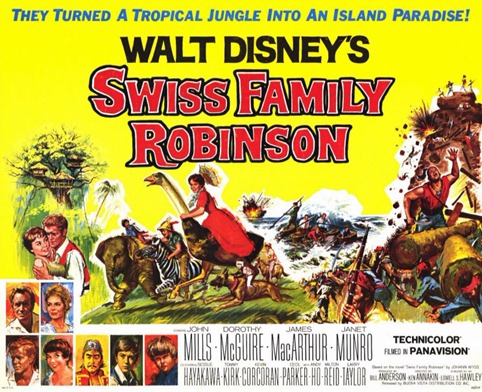 Swiss Family Robinson. Not only is it one of my favorite films of all time, it’s got all the elements of Adventureland except Dole Whips: the jungle, the treehouse, and even pirates. Plus, it’s got that whole the-tropics-as-seen-through-the-lens-of-19th century Europeans thing going on. In fact, the only thing I don’t like about this movie is how Francis is the single most annoying film character not named Jar-Jar Binks or Chris Tucker. His obtuse stupidity is always endangering the family, and in real life a tiger would have eaten him ten minutes after they landed on the island.

Now we come to Frontierland. There’s really only one choice here: 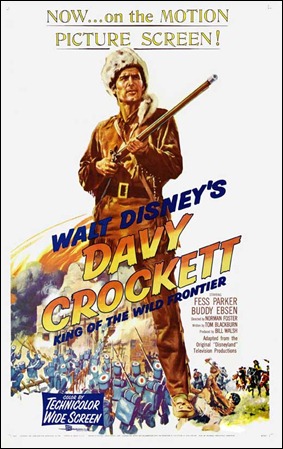 What, you were expecting The Apple Dumpling Gang? Davy Crockett is the reason why Frontierland took up one-third of Disneyland’s acreage when it opened in 1955.  Fess Parker’s version of the character was the Optimus Prime of the 1950s.

It was a little tough to choose a quintessential Fantasyland film, but I finally went with this one: 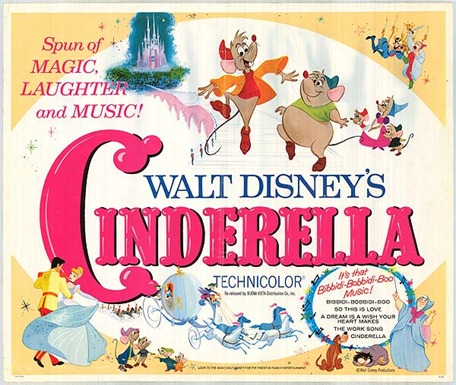 Really, I suppose you could have picked any of the “princess films” of Walt’s era, but I went with Cinderella because it’s the most polished and its songs are the most memorable. Also, Cinderella’s Castle at Florida’s Magic Kingdom has been used as the template for the castles in Tokyo and Paris.

And now we come to Tomorrowland, and the only film on this list that is not older than I am: 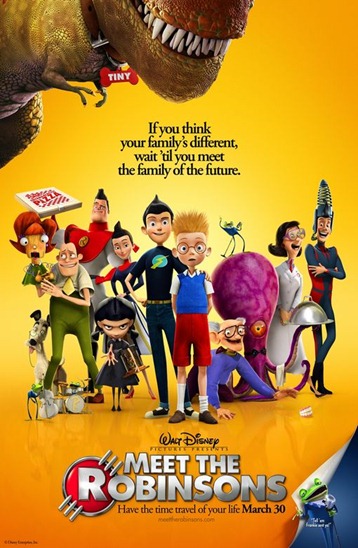 It was not a big hit, nor is it viewed as a classic like the other films listed here. But Meet The Robinsons is the perfect Tomorrowland movie, and not just because we get a glimpse of Space Mountain and the StarJets, but because it positively oozes optimism about the future, which is pretty rare in movies these days.

So those are my picks for the Disney movies that best represent the lands that make up the Magic Kingdom, but wait! There’s one more thing. Every day at the Magic Kingdom is topped off by a nighttime spectacular; a show that combines visual spectacle with a grand musical soundtrack. And so, the last entry in our Magic Kingdom movie marathon is quite properly . . . 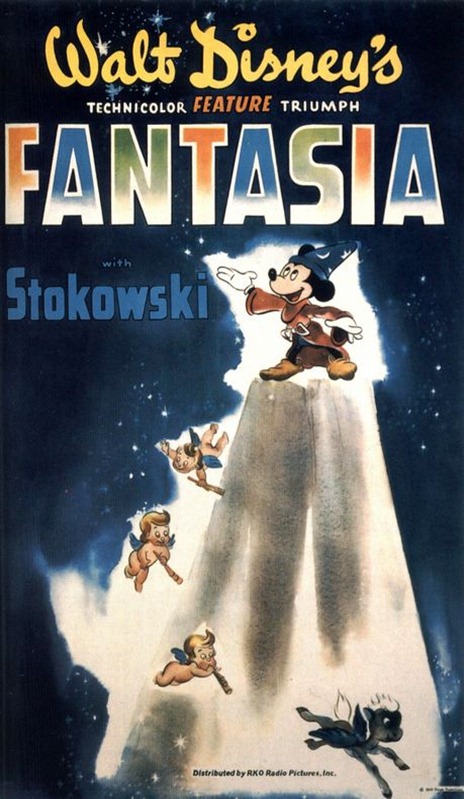 Thanks for reading, and if you have your own ideas about what Disney films best capture the sprit of Main Street, Adventureland, Frontierland, Fantasyland, or Tomorrowland, please discuss them in the comments!

In Which I Am On A Podcast

Last week I got to do something completely new to me when the WEDWay Radio guys invited me on their weekly companion show, WEDWay NOW. Although I was excited about my first-ever appearance on a podcast, I was also pretty nervous, because I am a lifelong stutterer and podcasts are an audio-only medium. Also, the WEDWay shows always sound very polished and professional, and when they have a guest it’s always a knowledgeable, accomplished member of the Disney fan community, as opposed to some random dude with a blog.

So I was happy to be on the show, but inwardly I was pretty sure it would go over about as well as that time Joe Piscopo was on Star Trek. 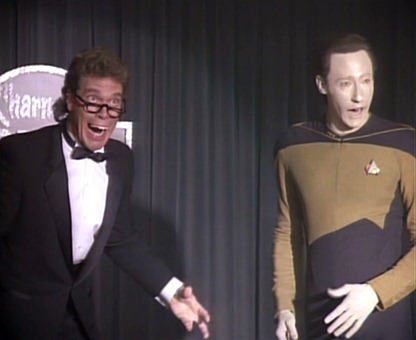 Yes, this is actually happened

So how did it go? Well, Matt and Nate are very gracious hosts, every bit as friendly and personable off the air as they are on the air, and when the recording was finished I was cautiously optimistic that I’d done an okay job. Here’s the link to the show. The parts where people other than me are talking are really excellent. And if you ever wondered 1. what kind of weirdo could write a blog like this, and 2. why I write instead of podcast, well, there’s your answer.

The latest post at Passport to Dreams Old and New explores the various techniques used at the Disney parks to hide (or divert your attention from) the boxy, warehouse-like show buildings that house most attractions. The article mostly focused on the Magic Kingdom (with a small foray into Animal Kingdom), so naturally I started thinking about EPCOT.

In the World Showcase Disney’s show building concealment techniques are in full effect. It’s necessary, because they’re trying to create the illusion that a piece of each the featured countries has been plopped down alongside an artificial lake in Florida.

Future World is a different story. Its buildings are basically permanent Worlds’ Fair pavilions. If you look at the original pavilions (and here I mean the ones that were either already built or finalized before Michael Eisner took over in 1984. So by this definition, The Living Seas is an original pavilion, but Wonders of Life is not) they don’t really consist of a façade tacked onto a plain boxy building. Pavilions like Horizons and World of Motion looked almost as futuristic from the back as they did from the front. There’s still a little bit of visual trickery going on-The Land is not really built into the side of a grassy hill that extends from the Seas to Imagination, that “hill” is there to hide some functional areas of behind and between those buildings-but it’s fairly minimal. A ride on the old Skyway in the Magic Kingdom would quickly expose Fantasyland as nothing more than some rather plain-looking buildings with attractive facades on them, but Future World always looked just as futuristic from the Monorail track as it did at ground level.

Mission:Space completely broke this paradigm. It’s a more conventional show building with a fancy façade on the front. But the one that a lot of EPCOT aficionados have a problem with is the Soarin’ building. Maybe you’ve seen it: 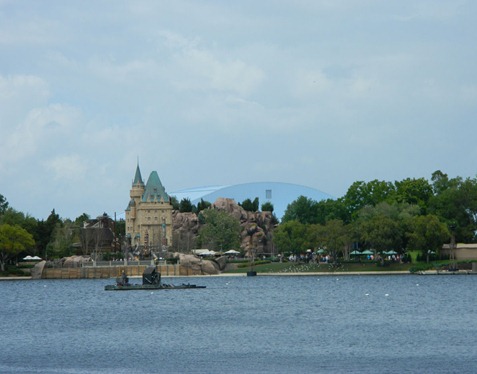 Doesn’t really jump out at you? How about now? 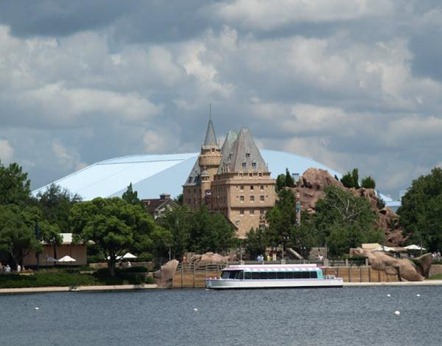 Most people don’t even notice it, but it’s been said once you see the Soarin’ show building you can’t forget it’s there. I’m not sure I agree with that. Maybe it’s because I don’t often find my gaze drawn to the Canada pavilion when I’m in the World Showcase, but most of the time the Soarin’ show building is pretty much invisible to me unless I actively look for it. That’s pretty impressive, considering that it’s really too big to hide. Covering it with rockwork or something like that would draw even more attention to it, but in the end simply painting it blue seems to make it blend into the air around it.

Interestingly, the plans for the abandoned Project Gemini (the early-2000s proposal to overhaul Future World) would have placed Soarin’ on the north side of The Land pavilion, next to The Seas. Of course, that would have involved a more drastic interior overhaul of The Land than we ended up getting. Would that have been preferable? Or would there complaints be about how Soarin’ ruined the skyline of Future World had it been placed on the north side of The Land instead of the south? (Answer: of course there would be complaints, this is the Internet.)

If you really want to get a good look at some of EPCOT’s invisible areas, take the Undiscovered Future World tour. You’ll be surprised at just how well Future World’s landscape hides the park’s backstage areas. 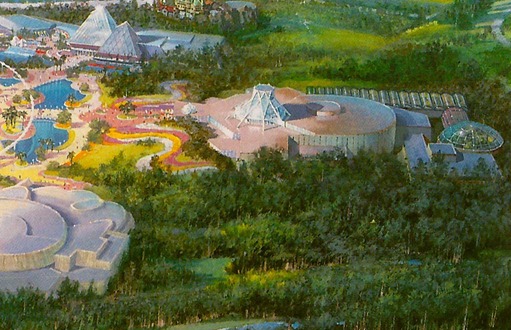 See all the greenery where the backstage areas should be? The reality, of course, is not as attractive: 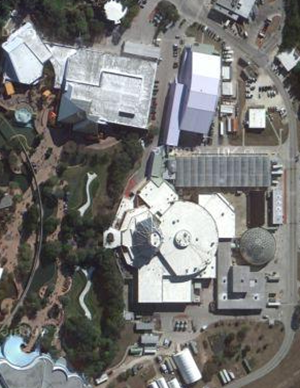 Yep, most of what’s back there is rather paved and treeless. But let’s take a closer look at the “hill” that appears, from ground level, to come right up to front wall of The Land. 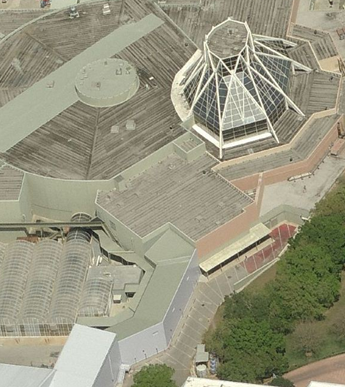 As you can see, the “hill” isn’t a hill at all, it’s a few truckloads of earth that was put there to hide the wall that conceals the utilitarian backstage area that’s really in front of the pavilion. See that overhang near the reddish-colored pavement? If you were to walk out the double doors near the Soarin’-area restrooms, that’s where you’d be. (NOTE: Unless you’re on an authorized backstage tour, do not actually do this.)

Another interesting illusion in Future World West concerns the true size of the Imagination pavilion. From ground level, it’s obvious that the pavilion is pretty big, but it’s easy to think that the back side of the pavilion is pretty close to the back side of the glass pyramids. In fact, the Imagination pavilion is much humongouser than most people think. (I don’t care what my spell check says, if “Nighttastic” is a word, then so is “humongouser ”) Take a look: 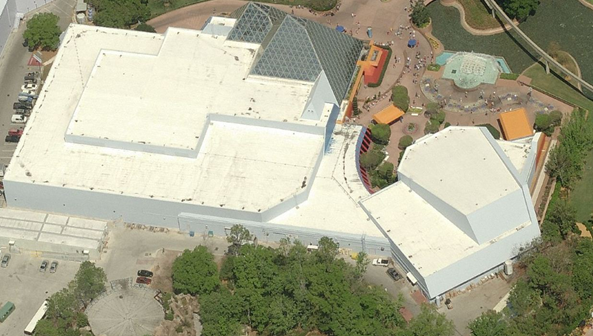 It’s easy to look at that picture and conclude that the original Omnimover ride was much longer than it actually was, and that the current attraction is therefore an even bigger travesty. And while I rarely pass up a chance to crack on the Dr. Nigel Channing snore-fest, accuracy demands that I point out that the entire interior volume of the Imagination pavilion was never completely devoted to attractions. There’s quite a sizable backstage area there, including a maintenance bay for the ride vehicles and a sterilizing facility for 3-D glasses. Also, notice the circular structure at the bottom of the picture; it’s the Canada CircleVision theater. Yes, the southern end of Future World and the northern end of the World Showcase are much closer together than most people think; the layout of the park basically makes you take the long way around to travel between them.

Well, what I intended to be a small update has turned into enough material for a whole other post! Thanks for reading and for your comments!