Sometimes I wonder how the people who are always complaining that Discovery isn't "real" Star Trek would react to a big-screen reboot of The Next Generation that reimagined that era's starship Enterprise as a warship captained by a grim, revenge-obsessed Captain Picard. What if it was more darkly violent than any previous Trek film, and relegated the optimistic Roddenberrian message to a paper-thin B-plot? If that ever happened, I'll bet the online Star Trek Fundamentalists would throw a massive Internet tantrum that would make the furor over The Last Jedi look like a polite disagreement. 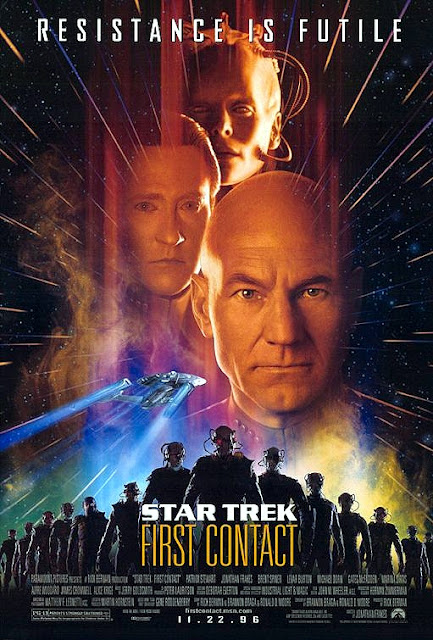 The 1990s were a weird time. We had a movie where the Teenage Mutant Ninja Turtles danced with Vanilla Ice. Pauly Shore had a career. And amazingly, against all reason, we had a dark and gritty Star Trek: The Next Generation reboot that the very same fans who now rail against modern Trek for being too dark and violent absolutely loved. How did this happen?

It's worth remembering that the original show was made during the Vietnam War by World War II and Korean War veterans, in a world that lived under the constant threat of Mutually Assured Destruction. The idea that conflicts should be solved with words instead of weapons was a somewhat-radical notion that greatly appealed to the show's young audience, most of whom were personally affected by Vietnam in one way or another.

But by the time Star Trek celebrated its 25th anniversary in 1996, all that stuff was in the past. The second generation of fans grew up during a time when the Cold War was receding, the US military draft had been discontinued, and the western world was at relative peace. The cartoons that entertained us as young kids were the Transformers, GI Joe, He-Man, and even R-rated characters like Rambo and Robocop that had been repackaged for children. All of them were about factions of good guys and bad guys attacking each other with lethal force. (Although nobody ever died or got hurt unless it was time to refresh the tie-in toy line.) Yeah, a lot of those shows had a "moral" at the end, but it kind of got lost after the previous 20 minutes of nonstop fighting.
In 1991 our generation experienced its very first war, the weeks-long Gulf War. It was fought by a small, all-volunteer force and packaged as entertainment by the 24-hour TV news networks. (CNN even gave it a logo and theme music.) Not much of the coverage bothered to delve into the inherent complexities of a conflict in the Middle East. They framed it as a battle of Good vs. Evil; a live-action version of the GI Joe cartoons we consumed in in the '80s. There were serious consequences and real human costs, of course, but the American media didn't really stick around much to cover those.
During the 1990s our generation grew from rambunctious kids to rebellious teenagers. Teenagers of our parents' generation had rebelled by becoming anti-war, flower-power hippies; we rebelled by doing the opposite of that. Our favorite video game was Mortal Kombat, a fighting game where the victorious player could gruesomely murder their opponent by entering a character-specific combo. Our favorite superhero comics were "extreme" Image titles like this: 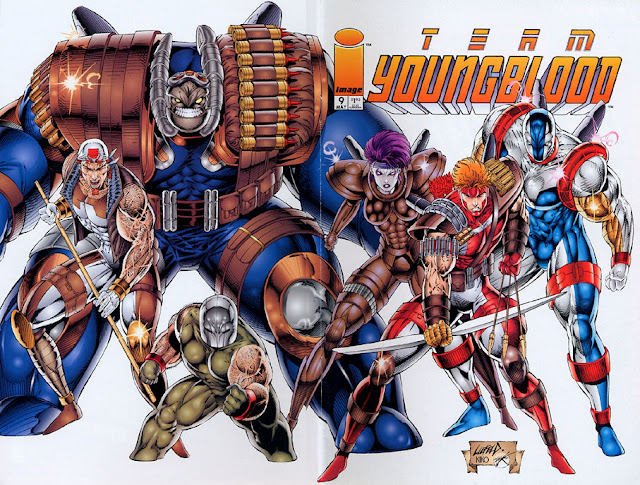 We liked "heroes" with names like BloodGun and MurderBlade and Slaughter Ninja who did stuff the Super Friends would never dream of, like smoke, drink, curse, and above all else kill their enemies. In these kinds of stories, peace was the coward's way out. "Real" heroes showed their bravery by doing what "needed" to be done i.e. kill the bad guy. Even Superman wasn't totally immune to the trend:

What I'm trying to say was that the young Star Trek audience in 1996 wasn't a bunch of socially-conscious peaceniks. We were stupid adolescents who saw violence as empowering and fun, but we had zero understanding of its real-world consequences. As much as we enjoyed Star Trek: The Next Generation, we tended to think of Captain Picard as kind of a boring wimp who talked too much:

So when the first stills from the movie showed up in Star Trek Communicator magazine, featuring scenes like this one with an action-oriented Picard leading a security team with beefy phaser rifles down a darkened corridor, we were stoked: 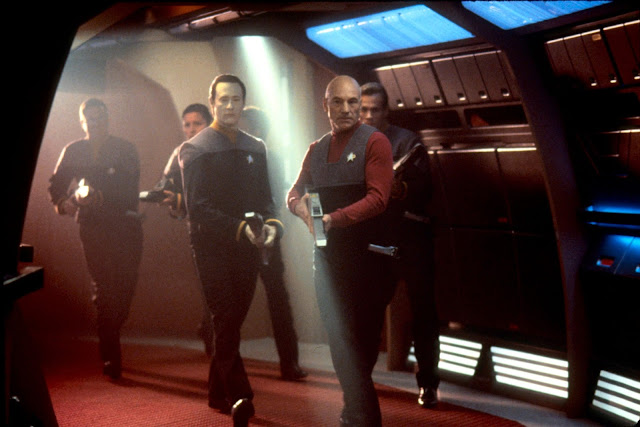 And when we saw a sweaty, rage-filled Captain snarl that "the line must be drawn here!" in every trailer and TV spot (along with shots of the biggest space battle in Star Trek history up to that point) we totally lost our minds.

First Contact was shaping up to be the most action-packed, testosterone-filled Star Trek in history. But it was also the first one to be rated PG-13. People forget what a big deal this was; it gave Star Trek the same cachet as other sci-fi action blockbusters like Independence Day or Jurassic Park. For the first time in ages, Star Trek was dark and edgy and dangerous. And in 1996, we loved it.
Today, First Contact is older than the entire Star Trek franchise was in 1996. And it doesn't hold up particularly well. Yes, it's the best of the TNG films. But here's the thing: none of the TNG films are good. My apologies if you enjoy them. By all means, go right ahead. But in my opinion, they're all bad. They all suffer from tiny budgets and the hand of a TV producer who didn't really like or understand Star Trek. First Contact feels the most "liberated" because it's the only one that wasn't made with some kind of creative mandate imposed by meddling executives.
And even though Picard works through his feelings of rage at the end (by killing his enemy, it should be noted), the movie commits the unforgivable sin of turning the Starship Enterprise into a warship. I'm all for Star Trek stretching its formula in new and different ways, but an inviolable part of its DNA is that the Enterprise is a ship of peace. The bad guys travel around in warships and battlecruisers, not our heroes.
After twenty-plus years of wars, mass shootings, and terrorist attacks we've come back around to the ideal of TV Picard who used reason and diplomacy to solve problems. The angry, gun-toting action hero on a revenge quest, who we thought was so cool when we were stupid teenagers, turns out not to be what we needed after all.
Posted by David Landon at Tuesday, January 25, 2022 0 comments
Email ThisBlogThis!Share to TwitterShare to FacebookShare to Pinterest
Labels: Star Trek, Star Trek: The Next Generation
Newer Posts Older Posts Home
Subscribe to: Posts (Atom)