What Is Star Trek?

In the run-up to the Star Wars premiere, we whose hearts belong to that other sci-fi franchise with "Star" in the name got a treat: the first trailer for July's Star Trek Beyond.

Perhaps you think Star Trek fans rejoiced at the new trailer the way Star Wars fans did at the first trailer for The Force Awakens. 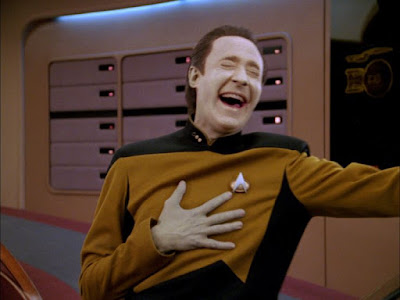 Don't be a fool. Star Trek fans reacted to this trailer the way they have reacted to every new Star Trek thing since at least 1987: well thought-out critiques angry temper tantrums. A common fan accusation in the wake of the Star Trek Beyond trailer is that this new film is not "real" Star Trek. But if you ask individual fans what constitutes "real" Star Trek you'll get different answers, all of which boil down to "whatever version of Star Trek I, personally, grew up with."

So how can you tell what constitutes "real" Star Trek? Well, since the new films are a reboot of the original 1960s TV series, let's start with the founding document of that series: the pitch Gene Roddenberry wrote in the spring of 1964 to sell Star Trek to TV executives. At its inception, what was the essence of Star Trek? Roddenberry explained:

After a list of story possibilities and an explanation of the mathematical probability of the number of Earthlike planets our galaxy may contain, the pitch continues:

STAR TREK is a "Wagon Train" concept--built around characters who travel to worlds "similar" to our own, and meet the action-adventure-drama which becomes our stories . . .

The time is "Somewhere in the future". It could be 1995 or maybe even 2995. In other words, close enough to our own time for our continuing characters to be fully identifiable as people like us, but far enough into the future for galaxy travel to be thoroughly established (happily eliminating the need to encumber our stories with tiresome scientific explanation).

There's nothing here that precludes this new movie from being accepted as Star Trek. It's action-adventure-science fiction. It has strong central lead characters (Kirk, Spock) and other continuing regulars (Uhura, Scotty, McCoy, etc.) who travel to worlds similar to our own and meet with action, adventure, and drama. So far, so good.

"But wait!" you say. "Isn't a real Star Trek story supposed to contain some kind of moral or message?" Right you are, imaginary person I conjured up for the sake of this article! And Star Trek Beyond is totally going to have that! Director Justin Lin spoke in an interview about how the Federation's expansionist philosophy will be questioned and weighed against the philosophy of the movie's principal antagonist. And Simon Pegg clarified what he meant when he said the studio wanted a story that was "less Star Trek-y" than the first draft that Bob Orci was to direct.

The problem, I think, is how that message or moral is conveyed. In the revised Writers and Directors' Guide for Season Two of the Original Series, Gene Roddenberry had this bit of instruction for how this should be handled:

Yes, we want you to have something to say, but say it entertainingly as you do on any other show. We don't need essays, however brilliant.


The Writers and Directors Guide also contained this important directive:

Build your episode on an action-adventure framework. We must reach out, hold and entertain a mass audience of some 20.,000,000 people or we simply don't stay on the air.


And if you watch the Original Series, that's exactly what it did. Yes, many of the stories had a message of some kind, but it was usually delivered by Captain Kirk after he'd spent the entire episode running, jumping, and punching out the aliens of the week. When modern movie studios spend over $100 million on a summer blockbuster, they expect an even higher action quotient. Star Trek was always intended to be mass market entertainment and has always made certain compromises as a result, as Gene Roddenberry once explained in a letter to Isaac Asimov.

"But, but" you sputter, "the new trailer has this in it":

"Do you see that? Do you? Huh? Captain Kirk on a motorcycle! That's too stupid to be Star Trek!"

Sure. Captain Kirk on a motorcycle seems a mite ridiculous. Almost as ridiculous as Mr. Spock having a jam session with space hippies: 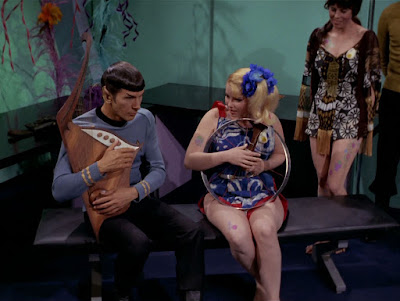 When fans complain that Star Trek Beyond (or the other J.J. Abrams Trek films) aren't "real" Star Trek or "their" Star Trek, what a lot of them are saying is that it's nothing like The Next Generation. And that's true. The Next Generation was a completely different animal. I love TNG to death, but probably the signature scene of the show was this: 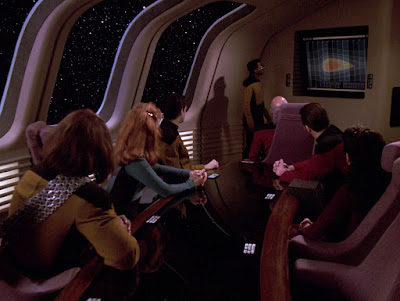 Seriously. Almost every episode had a scene with the characters sitting around the conference table watching a Space PowerPoint presentation or debating the Prime Directive or whatever. And you just can't get away with that in the 21st century, any more that you could get away with having Captain Kirk fight a stuntman in a fakey-looking lizard costume or have Uhura whimper "Captain, I'm frightened," when faced with a tough situation.

Other than Gene Roddenberry's increasing loopy ideas about the future (by the mid-1980s, poor Gene was totally coo-coo for Cocoa Puffs) a big reason why TNG had more staff meetings than phaser battles was because it was too expensive to do it the other way around. In an era of digital technology and $100 million budgets, that's no longer the case.

Star Trek has always been a product of its time. In the 1960s, this meant lots of miniskirts and sexism. In the 1990s, it was aliens with fake rubber foreheads and too much technobabble. And in the 2010s, it's explosions, gunfights, and lots of yelling.

Maybe it's not what you grew up with. Maybe you don't like it.

But that doesn't mean it's not Star Trek.
Posted by David Landon at Saturday, December 26, 2015 2 comments
Email ThisBlogThis!Share to TwitterShare to FacebookShare to Pinterest
Labels: Star Trek

Sam Hinkie Is My Role Model

I’m going to deviate from my normal range of topics for just a minute and talk about something I don’t normally discuss here on futureprobe: sports and the world of the workplace. Hopefully, you’ll find it amusing. If not, it’s a big Internet.

What do you want most? The answer to that question is different for just about everybody: maybe you want world peace, or a Lamborghini, or a Jacuzzi full of supermodels. But the one thing most people want is money, and a lot of folks would love to have a job that pays them a lot of money without having to do anything remotely productive. Which is where Sam Hinkie comes in.

Sam Hinkie, for those of you not conversant with the sportsball, is the general manager of the Philadelphia 76ers basketball team. NBA general managers make around $1 to $3 million a year, which is more money than 99.999% of Earth’s population will ever see in their lifetime. In return, they are supposed to assemble a competitive basketball team with a reasonable chance to win the league championship. Frequently, they fail. But they’re usually at least trying. Still, since only one team can win the championship every year, and only five to seven other teams are considered to be contenders, the majority of NBA GMs get ripped apart on sports talk radio and the Internet no matter how hard they try to assemble a good basketball team.

So Sam Hinkie came up with a brilliant plan. He would not even try to assemble a good basketball team. Instead, he would deliberately fail at his job, continue to collect $1 to $3 million per year, and if anyone asked he would just say he was engaging in “tanking”.

You see, sometimes even good teams will reach the point where their best players have retired or left to play somewhere else, and their GM will deliberately fill the team with bad players on short-term contracts so they’ll lose a bunch of games and thereby have the best chance to grab the best player in the upcoming college draft. This is called “tanking”. The thing is, a bad team assembled by a good GM engaging in tanking looks exactly like a bad team assembled by an incompetent GM who stinks at his job. And since 2013, Sam Hinkie has been able to collect $1 to $3 million per year to suck at his job, all while assuring everybody that he’s not in incompetent boob, but a wizard-like basketball genius executing a brilliant long-range plan.

Of course, you can only tell that lie for so long before people start to catch on. This season’s incarnation of the Philadelphia 76ers has been so dismally bad that it’s reaching back through time and erasing games the teams won in the past, and so, in an implicit admission that Sam Hinkie is less competent than a double amputee in a butt-kicking contest, the team hired a respected executive named Jerry Coangelo to basically take over Sam Hinkie’s responsibilities.

Sam Hinkie is getting paid millions of dollars a year not do any work!

Now, Sam is not a stupid man. In fact, in his previous job with the Houston Rockets he showed himself to be pretty good at assembling a talented basketball team, which you may recall is the main responsibility of a General Manager. So what is more likely? That he stopped on the way from Houston to Philadelphia and had several key brain lobes amputated, turning him into a drooling idiot? Or that he read the situation in Philadelphia, realized the owners wouldn’t fire him no matter what he did, and proceeded to deliberately stink at his job so they’d bring in somebody else to do it for him while still allowing him to keep his General Manager title and the $1-$3 million a year that comes with it?

In short, Sam Hinkie figured out how to make millions of dollars without doing anything remotely useful or productive. And that’s why he’s my role model.