The Case Against Star Trek Movies

NOTE: The dollar amounts in this article are approximate and inflation-adjusted.
It's pretty well-known that the only reason we even have Star Trek movies is because of Star Wars. Paramount Pictures tried to make a low-budget Star Trek film a couple of times in the mid-1970s before giving up, concluding that there was no Star Trek story "big enough" for the cinema. But when George Lucas's crazy little space movie made literally ALL the money, Paramount had a sudden change of heart about the property they owned with the word "Star" in the name. Well, the fact that they desperately needed a way to recoup all the money they sank into preproduction on a new Star Trek show for their stillborn TV network probably had something to do with it, too.
A funny thing about Star Trek in those days was that nobody knew how big it could actually be. Star Wars ended up making $1.3 billion in its initial release. It was safe to assume that almost every Star Trek fan bought a ticket for Star Wars; was that movie's enormous box-office take a clue to how well a Star Trek movie might do? It seemed at least possible.
But it turned out not to be. Star Trek: The Motion Picture ended up making less than half what Star Wars did: about $441 million. Star Trek clearly had value, but it was no Star Wars. Paramount eventually decided to go ahead with additional films, but they refused to give them proper motion-picture budgets. Despite that, the Star Trek movie series did respectably well for a while:
By 1986, the studio executives were feeling so good about Star Trek that they decided to expand the franchise with a brand-new TV show. The premiere of Star Trek: The Next Generation kicked off an incredible run of new televised Star Trek that didn't end until 2005. And from 1993 to 1999 there were two Star Trek series airing concurrently! But what about the movies? Let's take a look at the earnings for the films that came out during that period:
As you can see, as soon as there was new Star Trek on TV the movies took a steep dive at the box office. Pre-1987, the lowest-earning film was The Search for Spock. The only spinoff-era movie to earn more was First Contact, but thanks to its larger budget it was actually less profitable. So why did this happen?
Obviously, a big part of those early films' success was that they were the only new Star Trek being made. All the storytelling for the Star Trek universe was being done in two-hour chunks released two to three years apart, so each movie was a big event. But after 1987 we were getting a new story every week! Why go to the theater to get new Star Trek when it was already being served up to you at home?
And because the movies were still fairly low-budget, and the TV shows were able to use assets from them to make themselves look more expensive, there didn't seem to be much of a difference between movie Star Trek and TV Star Trek: 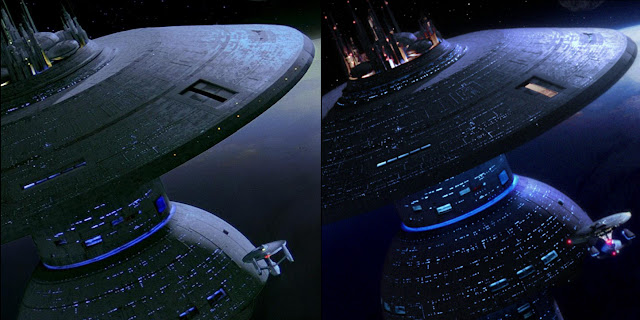 Basically, Star Trek cannibalized itself. Even a really good movie like The Undiscovered Country, which was billed as the final appearance of the original cast and boasted a topical story about peace with the Klingons just couldn't get audiences into theaters the way the earlier films had.
And when the Next Generation films rolled around the problem got worse. Deep Space Nine and Voyager were both on the air during the period that most of the TNG movies were released. So there were lots of ways to get your Star Trek fix without leaving home. Even worse, the Next Generation-era movies were made by the same people who worked on the TV shows, so they often seemed more like double-length episodes than actual movies. In the end, the audiences that gave The Next Generation its huge TV ratings mostly didn't bother to come see them on the big screen. (In fact, Brent Spiner once joked that the main difference with the movies was that fewer people saw them.)
Finally and perhaps worst of all, the Star Trek audience had started to fragment. Back in the early 80s "Star Trek" was just one thing: the adventures of the original cast aboard the USS Enterprise. But the different TV spinoffs tended to attract different (and progressively smaller) audiences. Not all fans of the original Star Trek liked The Next Generation. Not everyone who enjoyed The Next Generation liked Deep Space Nine. Many Deep Space Nine fans didn't care for Voyager, not all Voyager fans watched The Next Generation or Deep Space Nine, and almost nobody liked Enterprise. And as passionate as the DS9 and Voyager fans were, there simply weren't enough of them to warrant a jump to the big screen.
In 2002 cinematic adventures of the Next Generation crew sputtered to a disappointing end with the embarrassing failure of Nemesis. (That movie failed to even win the box office in its first week of release, losing out to the Jennifer Lopez romcom Maid in Manhattan before getting absolutely destroyed the second week by the latest Harry Potter installment.) Rick Berman worked with a new writer to develop a script for a prequel set between Enterprise and the Original Series, but the studio was never serious about the project and nobody was surprised when they shelved it. Over on TV, Enterprise limped to a lackluster finish in 2005. The series finale was one of the most hated episodes in franchise history, and showed just how little longtime producer Rick Berman understood the Star Trek fanbase. There was a tiny "Save Enterprise" campaign, but to most fans the show's cancellation came almost as a relief.
In 2009 the Star Trek movies were rebooted by a big-name director and were finally given a proper movie budget for the first time in 30 years. J.J. Abrams' Star Trek was a bigger hit than any Star Trek movie had ever been, but it benefited from coming out a time just before the dominance of the Marvel Cinematic Universe and the return of Star Wars. Also--and this is key--the Abrams films were the only new Star Trek being made. There was no Star Trek on TV to steal the spotlight.
By the time Star Trek Beyond was released in 2016 Star Trek had to compete for attention with the Marvel and DC cinematic universes, not to mention a resurgent Star Wars franchise. It was a losing battle. The lesson of Star Trek: The Motion Picture had to be learned by a new generation of executives: Star Trek just isn't a major-league movie franchise.
By the time Star Trek Beyond hit theaters, plans were already underway to bring Star Trek back to TV in an entirely new way: as the cornerstone of a CBS-branded Internet streaming service. (A strategy that Disney is mimicking now with new MCU and Star Wars television offerings). Streaming Star Trek has a little something for everyone: Discovery appeals to the younger fans brought in by the splashy J.J. Abrams films, Picard and Lower Decks are aiming for the older Star Trek audience nostalgic for the 1990s, Strange New Worlds seems to be aimed at an audience that wants fun Star Trek adventures that aren't so heavily serialized, and the upcoming Prodigy is aimed solely at kids who may have never seen Star Trek before. And of course, the people who find their greatest contentment when they're screaming at their YouTube audience about how much they hate everything are finding plenty to dislike. So everybody's happy.
After I started working on this article, the news broke that Discovery writer Kalinda Vazquez is working on a new Star Trek movie script for J.J. Abrams' Bad Robot Productions. Will it actually get made? Or will it join Quentin Tarantino's and Noah Hawley's projects in the dustbin of cancelled/indefinitely delayed Star Trek movies? Who knows?
But I just can't see how a Star Trek movie, no matter how good it is, could possibly compete with a Marvel, Star Wars, James Bond, DC, or even Transformers in a standard theatrical release. Maybe it'll be released directly to Paramount+ as some kind of special Star Trek event during a gap between seasons of the new shows.
Star Trek is back on TV now, and that's probably where it should stay.
Posted by David Landon at Wednesday, March 17, 2021 0 comments
Email ThisBlogThis!Share to TwitterShare to FacebookShare to Pinterest
Labels: Star Trek
Newer Posts Older Posts Home
Subscribe to: Posts (Atom)