Why Star Trek Should Ditch the Transporter

If someone at CBS came up to me and said "Dave, we want you to reboot Star Trek for us, but you're only allowed to make one major change," the first thing I would do is laugh nervously and try to get this person some help for their untreated mental illness. But if the offer was legit, and I really had the power to reboot Star Trek and make one major change to it, here's what the change would be: 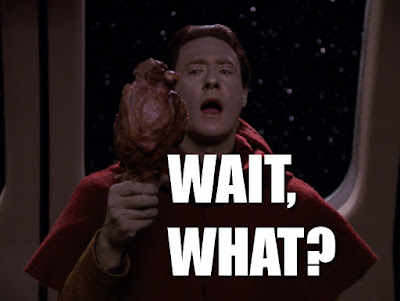 Have I lost my mind? Don't I know the transporter is an integral part of Star Trek? In a way, it's what the show is all about: we visit a new planet every week, our characters beam down to it, and stuff happens. How can you have Star Trek if no one beams down? If they have to take a shuttle, it's just The Orville without any jokes.

Teleporters aren't unique to Star Trek. They appeared in early 20th century pulp sci-fi along with ray guns and faster-than-light travel. But to those audiences, which included a young Gene Roddenberry, teleporters would've seemed like a logical extension of the same technology that gave us radio and eventually television. Even by the 1960s, teleportation was one of those things that seemed fantastical but not overly ridiculous, like the computer in a modern-day cop show that can magically enhance grainy surveillance cam footage to read the license plate of a speeding car at night.

But Gene didn't give his television starship a teleporter just because he thought it was cool. It was purely a budgetary decision; he'd promised network executives that his show would visit strange new worlds on a TV budget, and a sparkle/dissolve effect was way more affordable than weekly shuttle landings. It was only after the show had been on the air for a while that the story problems created by the transporter became obvious. You see, when the transporter works the way it's supposed to, nobody is ever in danger. Our landing party could be surrounded by vicious Klingons ready to jam painstiks up their personal orifices, and the transporter can snatch them out of there in the blink of an eye. They can jump off a cliff and escape unscathed as long as the transporter chief hits "Energize" before they hit the ground. Heck, the spaceship they're on can even explode, and as long as the transporter is energized around the same instant the explosion happens not one hair on Mr. Chekov's Davy Jones wig will be singed.

So what's a writer to do to create some jeopardy? You know the answer: he or she has to come up with some bullcrap to explain why the transporter can't come to the rescue. It's a bad idea, when creating a fictional universe, to give your characters a tool so powerful that you keep having to break it to make your stories interesting.

During the Next Generation era, the transporter became even more all-powerful. Not only could it snatch people out of danger, it could even undo serious physical transformations that resulted from catching a weird space disease or traveling at Warp 10 or whatever. On TNG and Voyager, we saw characters transformed into old people, children, and giant salamanders. In each case, the solution was to plug a sample of their unaltered DNA into the transporter, thereby turning it into a magic reset button that could turn the characters back into their old selves right before the last commercial break.


STAR TREK is never fantasy; whatever happens, no matter how unusual or bizarre, must have some basis in either fact or theory.

The transporter does not pass that test. It's essentially magic. The fact that its operation has been surrounded with all kinds of made-up, sciency-sounding technobabble doesn't change that. The transporter is a device created to solve a budgetary problem that existed in 1966, and still existed in 1996, but does not exist now. Gene Roddenberry and his team didn't set out to create a multibillion-dollar entertainment franchise that could withstand decades of scrutiny. They just wanted to make a show that would have a good run on network TV.

If Star Trek is going to survive another few decades, I think it needs a hard reboot. The people in charge need to step back and examine each piece of the Star Trek mythos to see what holds up in the 21st century and what doesn't. Star Trek never has been and shouldn't be hard sci-fi, but I believe it does need to be science fiction and not science fantasy. The transporter is a fantastical "magic wand"  created to solve a real-world production issue that no longer exists. It robs stories of the danger and mystery of space exploration that helps make them interesting, and I think it's outlived its usefulness.