A Future You Can Wear

Throughout my childhood, I kept hearing that the year 2000 would usher in a flood of Jetsons-style technological wonders: space colonies, flying cars, personal jetpacks, and robots that cleaned your room. A lot’s been written about how disappointed we were when the 21st century rolled around and we didn’t get any of that stuff. However, there’s one element of that imaginary future that no one seems too upset about losing: space clothes. 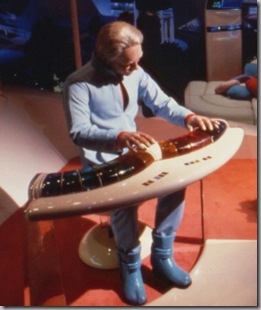 Where, oh, where is my one-piece periwinkle leisure suit with matching galoshes?

Naturally, there’s a reason for that. Whether they were tinfoil-inspired: 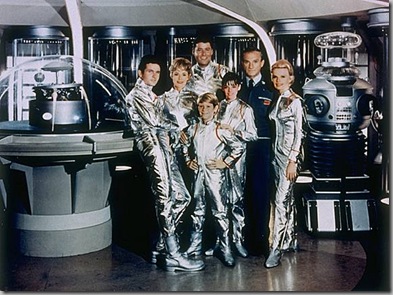 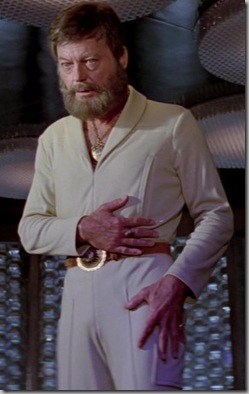 . . . space clothes are almost always impractical and stupid-looking. In the nineties, it got so bad that the cast pictures for the various Star Trek shows started to look like they were taken at a pajama party: 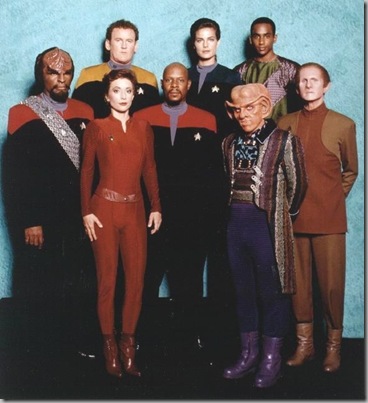 This is the grimmest sleepover I’ve ever seen

Interestingly, clothing is one more area in which the reality has outstripped our imagination. Consider these two samples of futuristic footwear: 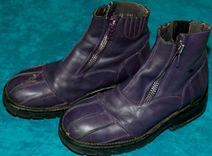 One of them is part of a costume worn by a member of an alien race in a 1990s Star Trek production, and one of them is an actual product that was manufactured in large quantities and enjoyed wide availability during the years from 1999 and 2000. Which is which?

Incredibly, the shiny moon boot on the right is the actual product: the Nike Air Flightposite basketball shoe. Although its futuristic look landed it onscreen in a couple of Hollywood science fiction productions (an episode of Star Trek Voyager, and on the feet of Wilhem Dafoe’s Green Goblin in 2002’s Spider-Man) the Flightposite was more commonly seen on college and professional basketball courts around the turn of the century. But it wasn’t just futuristic-looking, the Flightposite was a legitimately amazing piece of technology. The greenish-gold element is actually a single injection-molded piece of a material called Foamposite. Although it’s heavier than leather/fabric based shoes, the “unibody” construction offers the wearer greater stability. Even better, the Foamposite material actually molds itself to the wearer’s foot over time. And I haven’t even mentioned the incredible Zoom Air cushioning technology in the shoe’s sole.

Sure, you could argue that the boots that have been the staple of just about every sci-fi costume ever might very well conceal futuristic technology, but the fact is that, although we still wear the same basic items of clothing we wore twenty years ago, “space shoes” are something we have right now. Sure, they may not be as cool as these: 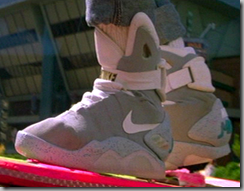 But they’re close. It’s not a stretch to say that you’ll find as much advanced technology on the display rack of your local mall’s Foot Locker as you will in the Verizon Wireless store next door.

Now if only someone would invent the Hoverboard.

Hello, everyone. Sorry for the lack of updates recently, but real life has been keeping me rather busy.

I’ve spent the last decade in the IT field, and computers have been an interest of mine pretty much as long as I can remember. Part of this stems from my childhood in the 1980s, when computers were being touted as the Next Big Thing. In 1982, the year EPCOT Center opened, the computer was named Time Magazine’s Person of the Year. This was based more on its potential, however, than its actual utility. Personal computers existed in 1982, of course, but compared to the smartphones we carry around today they were little more than “stone knives and bearskins”, to borrow a phrase from Mr. Spock. 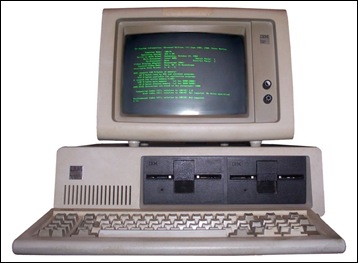 The graphical user interface would not see a wide debut until 1984 (no, I’m not forgetting the Lisa, but the fact is that it cost the equivalent of $21,000 in today’s money and no one bought it) hence the only way to interact with the PCs that existed in 1982 was via the command line. The ability to use a computer was considered a special talent akin to piloting the Space Shuttle. The media kept telling us that we’d all be using computers before long, but how we would do so, or what we’d use them for, was hard to visualize. Enter EPCOT Center. 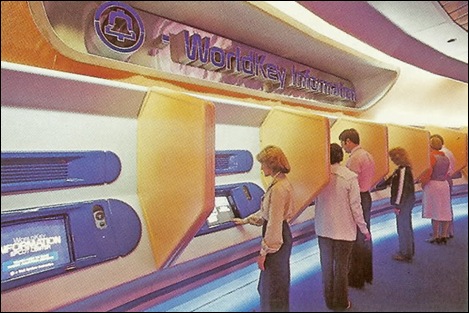 Pictured: the iPhone circa 1982

It did more than just tell us that computers were the wave of the future, it showed us. It started with Spaceship Earth’s post-show, then known as Earth Station. At Earth Station you could use a touchscreen computer kiosk to make reservations at EPCOT’s table service restaurants or find out more about the park. Unlike other computers of the time, the average guest had no trouble figuring out the WorldKey kiosks; the lines to use them rivaled the line to ride Spaceship Earth, and the restaurants were usually booked solid by 10 AM. They may have been primitive by today’s standards, but those WorldKey systems gave us an exciting (and amazingly prescient) preview of how we’d interact with the computers of the 21st century.

Earth Station wasn’t the only place at EPCOT to get your hands on a computer, though. There was also EPCOT Computer Central in CommuniCore, where you’d find kiosks similar to those at Earth Station that you could use to play games or build your own roller coaster via the Compute-a-Coaster, an interesting precursor to the Sum of All Thrills exhibit in today’s Innoventions. The original ImageWorks at the Imagination pavilion featured a computing technology that never quite caught on: pen computing. Long before Microsoft tried (and failed) to popularize pen computing with Windows XP Tablet PC edition, visitors to EPCOT could get a taste of a very early iteration of this technology at the Figment’s Coloring Book kiosks, where they could use a bulky electronic “pen” to color a computerized picture that was displayed on the screen in front of them.

Back in the 1980s, when computers were still seen as something of a novelty, the mere presence of one was enough to impress us. These days, when many of us carry powerful pocket-sized computers with us at all times and use them to do things that a person in 1982 would scarcely imagine, we aren’t as easily wowed. I was thinking about this early last month, as my wife and I passed beneath Spaceship Earth on our way out of the park. There was a group of teenage girls behind us conversing about how it annoyed them that one of their friends was repeatedly posting “LOL” as his Facebook status. It occurred to me that they were having a conversation that none of EPCOT’s opening day visitors would have been able to comprehend.

Myself, and others too, often complain that EPCOT isn’t what it once was. Sometimes, we get so upset about the pathetic state of the Imagination pavilion, or the fact that the Wonders of Life pavilion is sitting vacant, that we forget about the things Disney has done right. So I’d like to step back and recognize how well EPCOT’s interactive exhibits have transitioned from the 1980s mindset that anything computerized was automatically cool to the 21st century reality that the “cool factor” lies not in computers themselves, but in the amazing things we’ve learned to do with them. 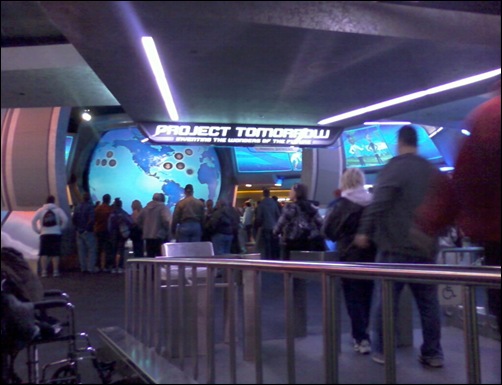