The Wonders of Florida

Lately, I’ve been somewhat critical of the way that Disney’s Orlando management team executes its duties. Reading some of the stuff I’ve written, you might get the idea that I believe a truckload of Chihuahuas hopped up on caffeine could hardly make worse decisions than the Orlando executives, and you’d be right. Recently, someone left a comment (one of many, actually, but we’ll get into that later) that basically said “You’re a big hypocrite because you complain about the way Disney World is run yet you continue to go there”

So let me set the record straight: although many of my fellow theme park bloggers are Annual Passholders who go to the parks all the time, I am not. My wife and I had Annual Passes from late 2009-late 2010, and we did not renew. Since their expiration, we’ve made only one visit, a day trip to EPCOT last year to meet up with some old friends we hadn’t seen in years. Although I’ve continued to write about new developments at the theme parks, we’ve taken to spending our vacation time (and dollars) elsewhere.

The foremost reason is that, although a trip to Disney World is fun every few years, once you cram a lot of visits into a relatively short time it starts to get a tad repetitive. Also expensive. And much like I love steak, but it’s not the only thing I eat, there are a lot of other recreational activities I enjoy besides visiting theme parks. So, here’s a short list of fun (and affordable) things to do in Florida outside the Orlando theme parks:

The Beach: Long before the Walt Disney Company transformed Orlando into a place people have heard of, Florida was already a prime vacation spot thanks to its 663 miles of beaches. And although Disney World often remains crowded (and expensive) after the summer vacation season ends, many of the coastal resort areas do not. The weather in Florida often remains warm into late October and even early November, which means that you can still enjoy all the outdoor activities associated with the beach, but without the crowds and intense heat of the summer vacation season. And if you’ve become used to Disney’s prices, you’ll be surprised by how much cheaper a coastal vacation can be. In fact, late last October my wife and I spent three days and two nights in a two-bedroom beachfront condo for just over $150 a night. I feel obliged to point out that $150 a night won’t even get you a room at one of Disney’s moderate resorts like Caribbean Beach (which is neither in the Caribbean nor on a beach) This was the view from our balcony: 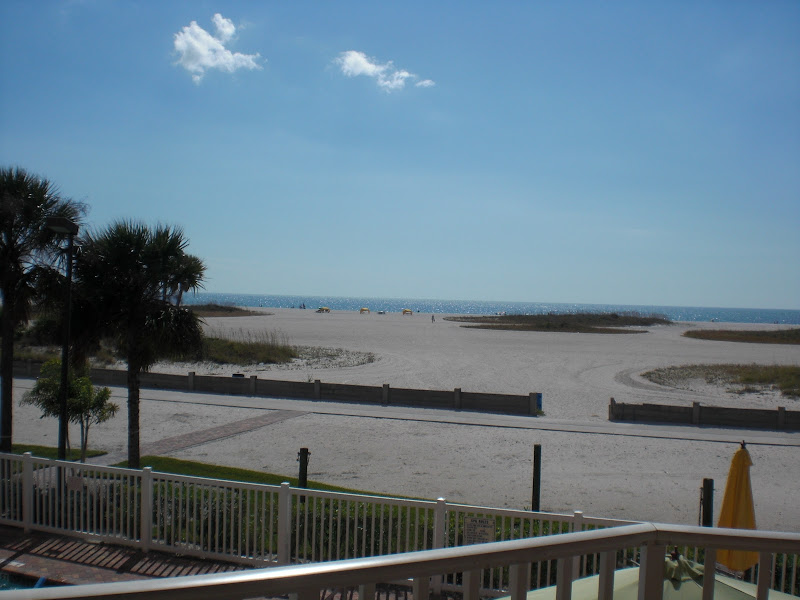 And, although there was no evening fireworks show, we enjoyed something even better: a beautiful sunset over the Gulf of Mexico: 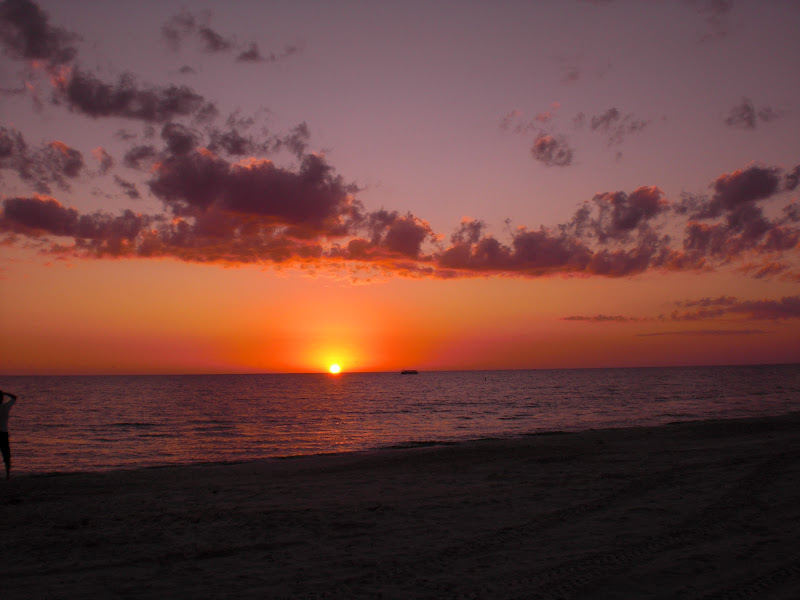 However, if you want to stay in a place where there’s more stuff to walk around and see, then you can’t go wrong with: 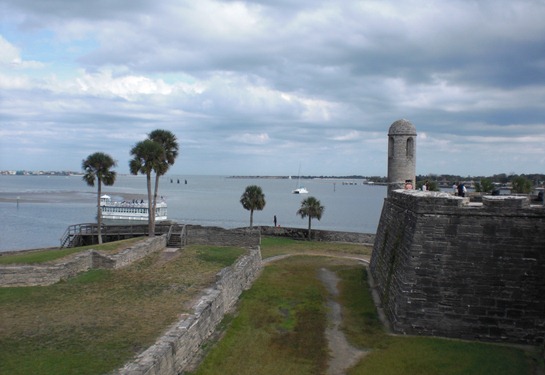 The oldest continuously inhabited city in the continental US, downtown St. Augustine offers a lot of things to see and do within an area that’s small enough to be traversed on foot, provided you don’t mind doing a lot of walking. But then, if you’re used to visiting a theme park you’re probably used to it.

If you’re looking for a World Showcase-like experience (by which I mean walking through a scenic area lined with European-styled buildings that house restaurants and souvenir shops) then you’ll want to head to St. George Street at the center of the downtown area: 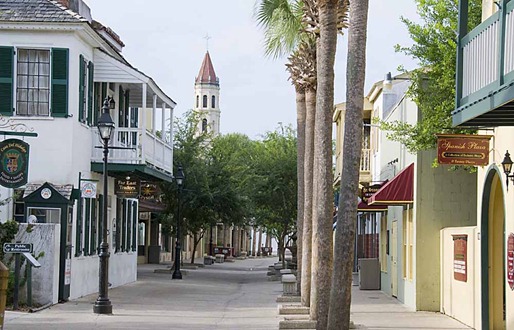 There’s a lot there, but one shop you’ll definitely want to visit is Whetstone Chocolates, because they make the best fudge on Earth. That is not an exaggeration. It is actually a federal crime to leave St. Augustine without getting some fudge from Whetstone’s. And if you get fudge from Kilwin’s instead of Whetstone’s it’s a capital crime. You think I’m kidding.

Of course, after you gorge yourself on the finest fudge this planet has ever seen, you’ll need to work off all those calories. Climbing stairs is an excellent way to do that, and there’s no better place to do it than the St. Augustine Lighthouse. 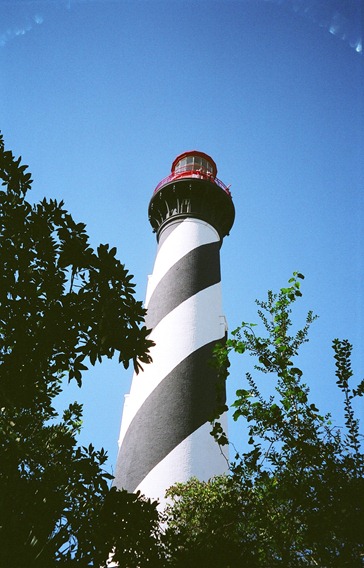 This is a real, functioning lighthouse that’s been in service since 1874. From on top you can enjoy beautiful views of the coastline and surrounding area, but in order to get there you have to climb the longest spiral staircase you’ve ever seen. Fortunately there are landings along the way where you can stop to rest briefly. The climb can be exhausting, but trust me, the view is worth it.

Of course, there are other ways to see St. Augustine if you don’t want to hoof it. There are a couple different tram services that run continuously between different downtown points of interest. You can also take boat tours and even horse-and-carriage rides.

Finally, as someone who loves attractions that use old technology, I’d be remiss if I didn’t mention the Fountain of Youth. It’s a privately-owned park located on the spot where Ponce de Leon allegedly first landed in Florida in 1513 (although the actual spot is most likely closer to Cape Canaveral) and is home to a number of exhibits that have not changed since before I was born. My favorite is the Discovery Globe, a planetarium-like show that has not changed since it opened in 1959. It’s the kind of thing that would have been in Disneyland’s Tomorrowland during that period, and as you sit in the darkened theater listening to Mr. 1950s Narrator trace the routes that Spanish conquistadors took to the New World on a giant illuminated globe, it’s easy to imagine that you’ve traveled 50 years back in time.

So far, all the destinations I’ve mentioned are best experienced in the winter, fall, or spring. Florida’s summers, with their triple-digit temperatures and humidity, are just too brutal for most outdoor activities. However, the intense heat is the perfect weather in which to enjoy:

The Springs: The state is home to a number of crystal-clear freshwater springs that have a year-round temperature of 72 degrees-which is colder than it sounds. My favorite is Itchetucknee Springs, at the headwaters of the Itchetucknee River. For just a few bucks, you can rent a raft or inner tube and enjoy a leisurely three-hour float down the river. It’s fun, relaxing, and inexpensive. 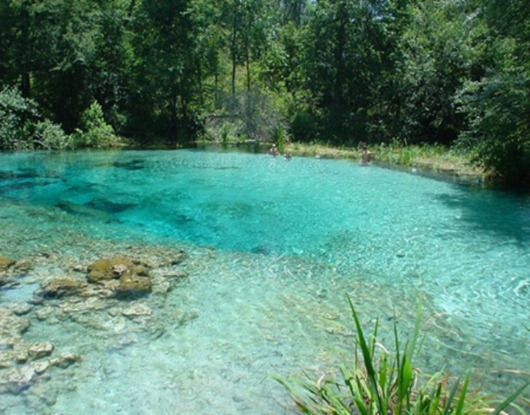 That’s just a short list of places to go and things to do in Florida that have nothing to do with the Orlando theme parks. There are even more things I didn’t talk about, like Kennedy Space Center, the glass bottom boats at Ocala’s Silver Springs, not to mention the many state parks.

Myself and others in the online Disney theme park fan community tend to spend a lot of time bemoaning the company’s lack of interest in doing anything to actually earn our business. Fortunately for us, Walt Disney World is not located in remote wasteland like North Dakota. It’s located in Florida, where there are a wide variety of fun and affordable vacation options that do not involve forking over money to the Disney Corporation.

Look, if you’ve never been to Disney World, or if you have kids who have never been and they’re at the perfect age to enjoy it, then go if you can afford it. But if you’ve been to the parks so many times that you could navigate them while blindfolded, then go somewhere else. You’ll get so much more vacation for your money. Florida has been attracting tourists since before Mickey Mouse even existed. Come find out why.

If you made it this far, thanks for reading! If you’re inclined to comment, you’ll notice that I’ve tweaked the settings and you’re required to have some kind of an account, Google or otherwise, in order to do so. You see, I really don’t mind if someone wants to entertain themselves by leaving what they think are cleverly-worded comments about what a pathetic no-life loser I am for writing this blog instead of, I don’t know, bringing about world peace or something. It’s hard to find joy in posting bitter comments on a blog about mostly EPCOT and Star Trek that only gets a few hundred hits a month, but if you can pull it off then I salute you. I won’t even delete the comments unless they contain language that’s not family-friendly. But I’ve decided that if you’re going to troll me, you’ve at least got to go to the trouble to register an account somewhere.

Thanks again for reading!