Not too long ago everyone was talking about the 50th anniversary of Mr. Rogers' Neighborhood, one of the first TV shows my parents allowed me to watch.

When I was a kid in the 1980s, most of the shows aimed at my age group were half-hour cartoons/toy commercials with names like Sgt. Dirk Fistpunch and the Justice Kommandos. These shows were all the same, and they went something like this:


SGT. DIRK FISTPUNCH: Oh no! General Destructo and the Slime Squad are trying get kids to drop out of school!

GENERAL DESTRUCTO: I don't care! My Slime Squad will trick kids everywhere into dropping out of school, and then the world will be MINE! Ha ha ha!

[The Justice Kommandos attack the Slime Squad with guns, swords, and missile launchers, but since this is a kids' show nobody gets killed or suffers gruesome injuries.]

These shows may have pretended to be educational but everyone knew they only existed to sell toys by appealing to little boys' power fantasies. And even though my parents--ever wary of the impact of televised violence on impressionable young minds--didn't allow me to watch them, they still influenced me because my friends at school all watched them, and the toys were advertised during the shows I did watch. My friends and I quickly came to view Mr. Rogers Neighborhood as slow and boring, stupid baby stuff. For older kids like us, there was more grown-up fare like Sgt. Dirk Fistpunch and the Justice Commandos.

But fast-forward thirty years or so, and a funny thing has happened. Whenever the latest terrorist attack or mass shooting or natural disaster happens and our social media feeds overflow with outrage and grief, someone always makes a post like this: 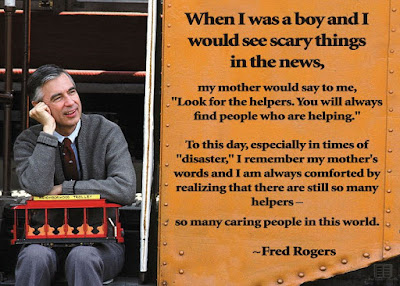 Yes, during those times it's not G.I. Joe or the Transformers that give us comfort. It's Mr. Rogers. It turns out that the "lessons" we picked up from those cartoons in our childhood don't translate so well to real life. But Mr. Rogers grows more profound and relevant with each passing year. I'll conclude this article by including a couple of my favorite lessons of his.

In Defense of Wesley Crusher

It's the moment that gave birth to Star Trek fandom's first hate group, and it happened about halfway through The Next Generation's two-hour premiere. Old-school Trekkers were already grumpy by this point. They never wanted this strange New-Agey reinvention, they wanted more of the Star Trek they were familiar with, featuring the original characters they knew and loved. And now, to add insult to injury, this happened: 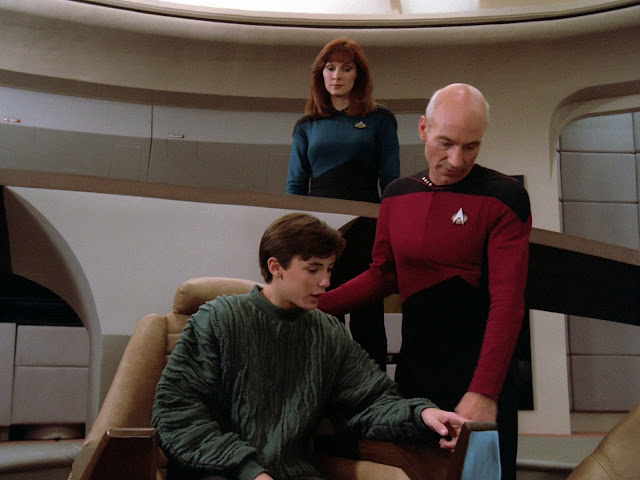 Yes, it's the scene where 15-year-old boy genius and ugly sweater aficionado Wesley Crusher sits down in the command chair and instantly understands how everything works, much to the annoyance of Captain Picard and the future founders of alt.ensign.wesley.die.die.die. Over the years a lot of people have complained about this high school sophomore knowing as much about the Enterprise's advanced technology as the highly-trained 24th century astronauts who work there, but remember that this aired in 1987.  And speaking as someone who was nine years old in 1987, it rings absolutely true. Let me explain.

The night the crew of the Enterprise-D first leapt onto our TVs in all their spandex-clad glory, personal computers had been on the market for about ten years. But the vision of a computer on every desktop was still a long way from reality. Plenty of adults never encountered one in their daily lives, and mostly saw them as hideously complex devices that only highly-trained geniuses could understand. But a lot of us kids had them in school, where our spongelike child brains could easily intuit how to use them. Right around the time TNG premiered, our family visited some friends who had a brand-new Apple IIc in their living room. With their permission, I plopped myself down in front of it and started writing a simple BASIC program from scratch. Meanwhile, my mom hovered nervously nearby worrying that any minute now I would press the wrong button, and our friend's expensive new computer would explode in a shower of  sparks like in the movie Desk Set. (She needn't have worried. The only computer on the market in 1987 to have a self-destruct button was the short-lived Tandy Explodo 5000.)

My point is that in those early days of the PC revolution, the list of people who were proficient at using these machines that were about to change the world broke down like this:
To non-computer-literate adults, the ability to sit down at a computer and actually make it do things was a near-magical superpower. Most of us kids couldn't do anything useful with this power; at the height of my programming ability I think I could make various colored lines appear on the screen. But all my parents could do was make the computer say "SYNTAX ERROR", so my useless line-drawing ability made me look like a NASA engineer.

Wesley Crusher's instant understanding of the new Enterprise's advanced computer systems makes a lot of sense in that context. It's a big reason why nine-year-old me identified with him right away. Heck, it never occurred to me that I should hate him until I got online in the mid-90s and learned that all the "cool" Star Trek fans did.

There's no dispute that the character was not well-written during the show's first season, but neither were any of the other characters. Season one of TNG was a garbage fire behind the scenes. I think a big reason for the backlash against Wesley was that a lot of his most fervent detractors saw a little too much of themselves in him. They were also geeky, awkward kids who related to machines more easily than people. But instead of the character that was most like them being a suave and heroic figure, he was a frequently-annoying teenager. He failed to make them feel powerful, and they hated him for it. (A lot of these fans, now middle-aged, hate The Last Jedi's portrayal of their hero Luke Skywalker for similar reasons.)

So yeah, season one of Star Trek: The Next Generation did a lot of silly, unrealistic things. But showing us a teenager who was good at technology wasn't one of them.