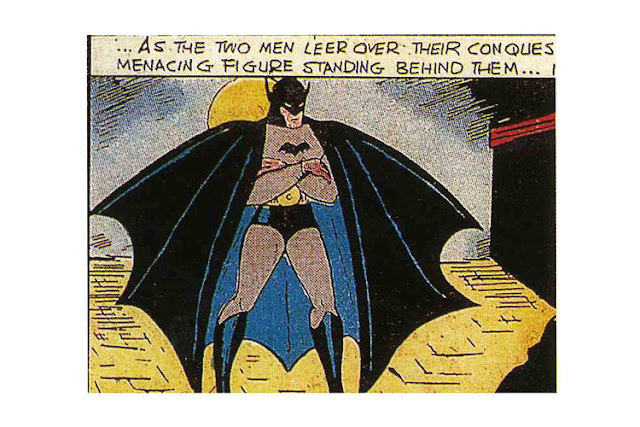 At some point, Batman became the DC universe's favorite superhero. In the comics, Batman can defeat any adversary with enough preparation. Green Lantern, the Flash, Superman, and even Darkseid are no match for Batman's intellect and array of bat-gadgets. Heck, I wouldn't be surprised if someone (Frank Miller, probably) eventually writes a story where the Dark Knight sneaks into heaven and beats up God.

But Batman shouldn't even exist.

Think about it: young Bruce Wayne swore to fight crime after a mugger murdered his parents. He's a billionaire businessman, maybe the most important person in Gotham City. And how does he choose to fight crime? By using his wealth and influence to attack the root causes, perhaps? Maybe nonprofit foundations and strategic partnerships with law enforcement and educational agencies to help lift people out of poverty and cure the ills that afflict Gotham's slums? Nope!

Instead he puts on a bat costume and randomly punches criminals.

Batman has no superpowers. He can't fly over the city using his super-hearing and super-vision to spot trouble, then zip down and stop it at super speed. So how does he go about his Batmanning? Every night he drives downtown, parks the Batmobile, and swings from building to building with his Batarang and Bat-rope looking for criminals to stop. Maybe he has some audio tech in his cowl to help him listen for things or some night-vision tech so he can see what's going on, but still his effectiveness is limited to whatever area he's in at the moment. He doesn't have super speed like Superman or The Flash, so he can't zip across town at will if the Joker or Killer Croc starts attacking people on the opposite side of Gotham City. And anyway, his "jump from rooftop to rooftop" method of patrolling the city would only work in some podunk place with a tiny downtown area of a few blocks. Gotham is supposedly the size of New York! Ah, but maybe Batman's stopping of a few random crimes here and there will serve to scare Gotham's criminal element straight! Sure, but has that ever actually happened? Gotham City is routinely depicted as a corrupt, crime-ridden dystopia that makes Detroit look like Disneyland. Obviously Bruce Wayne's "don a bat costume and punch whatever random criminals you happen to encounter" crimefighting scheme is about as effective as trying to fight fires with a flamethrower.

Also, it's ridiculously illegal. Kind of like those Death Wish movies where a fed-up Charles Bronson decides to make his neighborhood a safer place by going on a murdering spree. Only a psychopath would think Bronson's character is a good guy. In real life, he's a serial killer. Sure, Batman doesn't kill people, but the principle is the same: he chucks the legal system and dispenses vigilante justice to whoever he thinks deserves it.

But maybe you're thinking that Batman is necessary in a world where you have deranged super-criminals like Two-Face, Penguin, and the Joker. Except that each of those guys is a take-off on the ridiculously smart criminal trope you see on TV crime dramas, just weirder-looking. And you know what? Those guys always get taken down by ordinary cops who are not into cosplaying as winged rodents. But what about the bad guys that have superpowers? Don't the cops need Batman to step in with his array of anti-supervillain bat-gadgets? Well, in the Superman comics the Metropolis PD has a Special Crimes Unit that's specially trained and equipped to take down the various superpowered criminals that attack that city. They even have a specially-reinforced prison to contain them. Why doesn't billionaire Bruce Wayne make a donation to the Gotham PD so they could set something up like that?

I know, because the Gotham police are all corrupt except for Commissioner Gordon, right? Well then, gee, why doesn't billionaire Bruce Wayne use his connections to get some national media attention for the issue or get the US Justice Department to investigate Gotham the way they're doing in other real-life cities right now?

Look, I know the superheroes we love are basically just decades-old kids' entertainment. They weren't meant to withstand the endless scrutinizing and deconstruction that we do in the 21st century to make ourselves look smart on the Internet. But the conventional pop-culture wisdom that Batman's lack of powers makes him a realistic superhero is ridiculous.

In his hilarious reviews of Frank Miller's insane All-Star Batman and Robin comics, Internet reviewer Lewis Lovhaug (neé Linkara) posits that Miller's unhinged Batman is really Crazy Steve, a violent nutjob who somehow got his hands on a batsuit. I say that Crazy Steve is the real Batman. And he's no hero.
Posted by David Landon at Monday, February 29, 2016 1 comments
Email ThisBlogThis!Share to TwitterShare to FacebookShare to Pinterest
Labels: film, off-topic
Newer Posts Older Posts Home
Subscribe to: Posts (Atom)