One reason why I liked EPCOT so much as kid was because it reminded me of something else I loved: Star Trek. EPCOT Center of the 80s and the Star Trek films of that same period shared remarkably similar design aesthetics. How similar? Well, take a look at some of the Cast Member costumes for CommuniCore circa 1982: 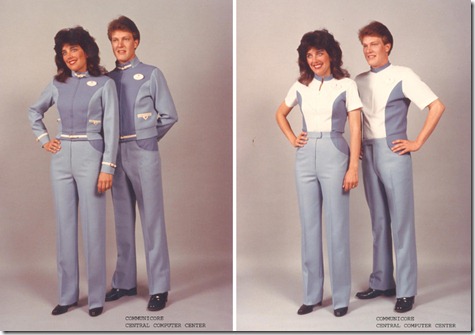 . . . and notice how they bear more than a passing resemblance to this: 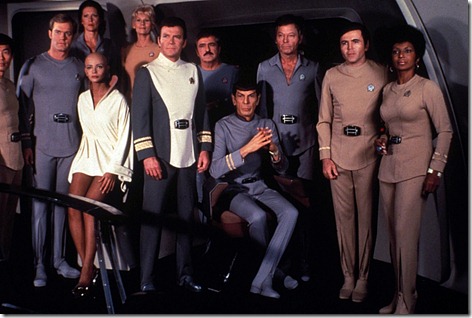 The costumes for the late-70s TV series Space: 1999 share the same aesthetic. Pastel pajamas were once considered to be very futuristic. But the similarity between early-80s Star Trek and early-80s EPCOT didn’t stop with the wardrobe. Compare Horizons’ apartment of the future . . . 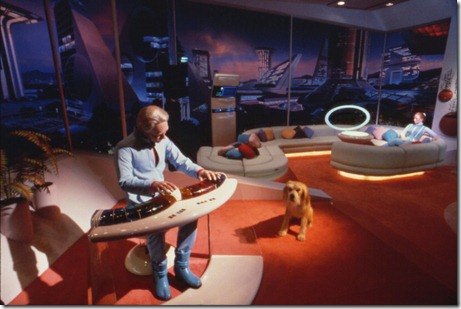 The Horizons apartment looks a little more futuristic (probably because the EPCOT guys had a bigger budget than the production staff of Star Trek II did) but the similarities are quite strong.

Finally, compare the architecture of Future World (and the view outside the narrators’ apartment in Horizons) to this view of 23rd century San Francisco from Star Trek IV:

Is is just me, or do the geometrically-shaped buildings remind one of Future World?

In June 1984 I saw my first Star Trek film, The Search for Spock. I had only ever seen the television show before then, (usually on my family’s 15-inch black-and-white-TV) so needless to say it make quite an impression on my six-year-old self. Three months later, in September, my first trip to EPCOT Center made an even stronger impression. Their aesthetic similarities made being in Future World feel like a walk though 23rd century San Francisco. Horizons’ scenes of futuristic living seemed to fit in well with the Star Trek movie universe, too. It seemed like I was seeing the stuff that was hidden just beyond the edges of the movie screen. The early ‘80s were an interesting time. Space adventure films were in vogue thanks to the success of Star Wars, and the new Space Shuttle seemed poised to make space travel routine. It was a fantastic treat to be able to see EPCOT Center while its vision of the future was still “current”. I’ll never forget it.

Well, I’m continuing to make little tweaks to the layout here. The background image I’m using is 1600 pixels wide, which may very well be narrower than the horizontal resolution of the monitors many of you are using. So, if you’re seeing white space along the left and right edges of the page, please leave a comment telling me what resolution you’re using, and I’ll try to adjust the background image accordingly.

Ever since Blogger unveiled their new Template Designer, I’ve been itching to give this place a facelift. I had some spare time over the last couple days, and now here it is: futureprobe 4.0. This place has already had more rehabs than the Imagination pavilion!

My wife and I will be spending the weekend of July 31-August 1 at Disney World, so the following week I’ll post reviews of Captain EO and the Coral Reef Restaurant, along with pictures of some of the new additions to the World Showcase. As always, thanks for reading!

Posted by David Landon at Friday, July 23, 2010 2 comments
Email ThisBlogThis!Share to TwitterShare to FacebookShare to Pinterest

Huffing and Puffing Around the World

EPCOT’s World Showcase is delightfully innocuous, a place where you can lightly sample the music, food, and gift shops of other cultures in a mall-like atmosphere. You’re never forced to leave behind the comfortable familiarity of the USA. However, World Showcase does push you out of your American comfort zone in one important way: it makes you walk long distances.

Imagination: the Rumors Are A-Swirling

With the return of Captain EO, EPCOT’s Imagination pavilion is once again the subject of rumors. Cast members working at the pavilion have been telling people that Kodak’s 28-year sponsorship is coming to an end, and this rumor is being repeated on more than one message board. Others speculate that Captain EO’s return might refocus attention on this otherwise neglected pavilion, perhaps leading to that long-awaited fourth refurbishment. What’s really happening? I haven’t the slightest idea; as I’ve said in the past I’m not a Disney insider, just a blogger with opinions. That being said, here are my opinions: