NOTE: This article contains spoilers for Star Trek Into Darkness. If you haven’t seen the film and wish to remain spoiler-free, go no further.

I’m fully aware that, as an old-school Star Trek fan, I was supposed to hate Star Trek Into Darkness. This article should be a lengthy dissertation on all the movie’s faults, and if you found it fun and entertaining, I’m supposed to tell you to stop it, because you are wrong, wrong, wrong. I should also prove how smart and witty I am by making several snarky comments about lens flares.

But that’s not what I’m going to do.

That being said, there is one moment that completely took me out of the movie. You know the one I mean: 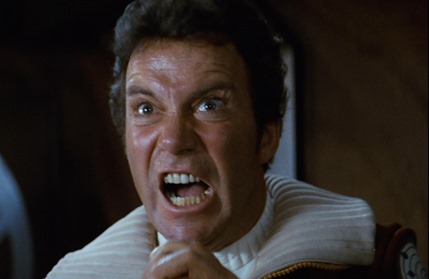 I know, when director’s commentaries are recorded and interviews are given, J.J. Abrams and his cohorts will claim that the moment where Spock yells “Khaaaaan!” was meant as an affectionate homage, a nod to old-school Star Trek fans to assure us that the filmmakers made this movie for us, too. Unfortunately, it kind of made it look like they’ve never actually seen The Wrath of Khan, or at least weren’t aware of the reaction William Shatner’s famous line elicits. I don’t know how cinema audiences reacted to it in 1982 because my parents didn’t believe in taking their 4-year-old to a movie in which alien brain worms slither in and out of peoples’ ears, but I sure can tell you the reaction that Shatner’s yell of “KHAAAAN"!” gets today: it makes people laugh. Or at least chuckle. It’s not a Crowning Moment of Awesome, it’s more of a Crowning Moment of Cheesiness That Still Somehow Manages To Be Kind Of Awesome.

So towards the end of Star Trek Into Darkness when Kirk dies saving the Enterprise, at a moment when the filmmakers clearly are trying to make you cry, having Spock howl “KHAAAAAN!” elicits the completely opposite reaction. It makes you laugh. And in so doing, it takes you right out of the movie and breaks the suspension of disbelief. For a moment you lose the ability to pretend that the stuff on the screen is actually happening and that the lines the characters are saying are really their words, and not something that’s been carefully crafted by a screenwriter.

So yeah, the “KHAAAAAN” thing bugged me. But other than that, I honestly did enjoy the movie. It was big and entertaining, and the characters were genuinely pleasurable to watch. Especially Simon Pegg’s Scotty. He absolutely stole every scene he was in, and I really enjoyed watching him do his thing.

Better yet, the movie really tried (as much as a big dumb summer blockbuster can) to have a Star Trekkian message and to comment on current events. I appreciate that.

So why does it seem that the majority of the “geek community” is being so negative towards this film? Are they just trying to make themselves look smarter than everyone else by disparaging a piece of popular entertainment on the Internet? I’m sure that’s true for some people. But here’s why I think that J.J. Abrams’ Star Trek films are more heavily-criticized than their predecessors, even though they share many of the same kinds of story problems.

The people who wrote for the original Star Trek were not raised in a cocoon of electronic media. They read books. They had life experience outside the entertainment industry: Gene Roddenberry served in the military and worked as a commercial airline pilot and a police officer before he became a writer. Gene Coon, who contributed almost as much to the Star Trek universe as Roddenberry did, served as a Marine in World War II. Nicholas Meyer, who directed two of the Original Series films and wrote for three of them, is very well-read and peppered his scripts with literary references.

One gets the impression that J.J. Abrams and his associates like Damon Lindelof, Bob Orci, and Alex Kurtzman don’t have much experience in anything outside watching movies and TV shows, and maybe reading comic books and playing video games. This causes the movies they make to lack a certain kind of depth, and I think it’s something that people pick up on, if only subconsciously.

I’ll have some more random and nitpicky thoughts about Star Trek Into Darkness later, but for now my verdict is: fun movie, entertaining, well-acted, has some plot holes. In other words, a summer blockbuster.