The Return of Captain EO

Although I visited EPCOT Center a couple times during Captain EO’s original run, I never got to see it. Its return, therefore, gave me a unique opportunity to experience a classic EPCOT attraction as an adult, unencumbered by any childhood memories. On Sunday, August 1, I experienced Captain EO, and here’s what I thought of it: 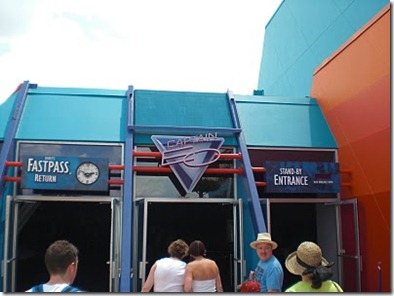 There are some things from the 1980s that will always be awesome, like The Empire Strikes Back, The Wrath of Khan, and The Goonies. There are things from the '80s that are cheesy but still fun, like Knight Rider, the first season of the original Transformers cartoon, and Mr. T. And then there are things that should never, ever, for the love of all that is holy, ever see the light of day again. Things like the Garbage Pail Kids, films by Golan-Globus, parachute pants and Captain EO.

Sweet mother of Optimus Prime, where do I even begin? How about the preshow? They're using the old 1986 preshow here, which is sort of a making-of montage. It's got shots of sets being built, Francis Ford Coppola directing, and dancers in leotards and leg warmers. Also George Lucas. Lots of George Lucas. You can tell that they were very proud, back there in 1986, to have George Lucas associated with the project, because he shows up in the preshow video more than anyone else. He's always pointing at things, making descriptive hand gestures, and telling people what to do while they listen with rapt attention, basking in his genius. This is meant to make the viewers feel that they are about to witness a spectacle of pure visionary awesomeness, but after the Star Wars prequel trilogy and Indiana Jones and the Kingdom of the Crystal Skull, we know that the only reason any self-respecting filmmaker would have George Lucas on their project is so they could listen to his advice and then do the opposite of whatever he said.

Well, the preshow is over soon enough and it's time for the main event. It begins with a dated special-effects shot of a starfield and a glowing, 3D galaxy-looking thing. The narrator tells us about a brave band of rebels who fight the forces of darkness (hey George Lucas, I wonder where that story point came from?) and as he talks a whitish rock appears on the screen. It's a 3D rock, and as the narrator talks about the rebels and their brave leader, it just keeps spinning towards us. It was on the screen for so long that I started to wonder if maybe the rock was the rebel leader the narrator was talking about. I got the impression that the filmmakers really wanted us to be impressed with this 3D rock of theirs. Anyway, just when it seems that the rock is floating just beyond the tip of our nose, it's destroyed by a laser blast from Michael Jackson's spaceship.

Despite what the narrator says, Michael Jackson, uh-I mean Captain EO, doesn't appear to be a brave rebel leader. He's the commander of a ship full of cheesy comic relief Muppet creatures, proto-Jar-Jars basically, who seem to be low-level space delivery boys. They're less like the Rebel Alliance and more like UPS. Only instead of brown shorts, Michael wears something much more embarrassing. Also, he delivers every one of his lines with a high-pitched, quivering tone that makes it sould like he's about to break down and cry.

After a space battle that plays like something from Star Wars if it was made with less money, they crash on a forbidding alien planet and are taken captive by guys who look kind of like the Borg. The Borg take them to the Supreme Ruler, who looks like a cross between the Borg Queen and the Wicked Witch of the West. After she threatens them, Michael breaks into a song-and-dance number where he reveals his superpower: with an energy blast from his hand, he can turn the Borg creatures into dancers with fabulous outfits and 80's hair! He's like a superhero: 80's Hairstylist Man! Zap! You've got a mullet! Zap! You've got a jheri curl! It's hilarious, but not on purpose.

Finally, Michael turns the Borg Queen into Angelica Houston, and everyone goes home happy, except for the audience who realizes that they've just found the answer to the question, "what could be worse than Honey, I Shrunk the Audience?" Look, I understand that Captain EO is popular at Disneyland. But southern California spends most of its time on a very different plane of existence than the rest of planet Earth. Once the "newness" of Captain EO wears off, it'll seem just as dated and out-of-place as it did in 1993.

In fact, it already does.