Revitalizing the Carousel(s) of Progress 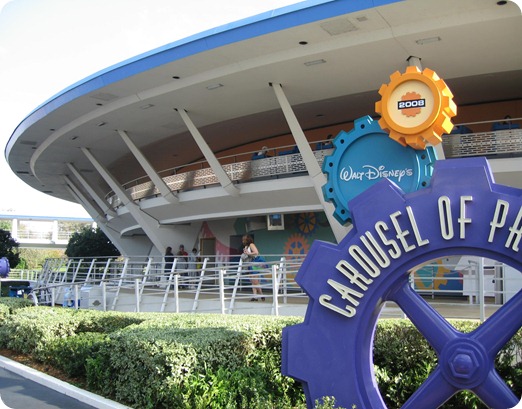 If I’m at the Magic Kingdom and I overhear someone say they’re going to skip the Carousel of Progress because they think it’s old or boring or whatever, I immediately decide that person is a Grade-A Nimrod. I might even jump on Twitter to let everyone know what a big stupid idiot I just encountered. Within minutes, my Twitter friends will most likely chime in to agree that this guy is indeed the world’s biggest moron, and if he’s incapable of appreciating a Classic Disney Attraction that was worked on by Walt Disney Himself, then maybe he’d be happier at Six Flags.

We WEDHeads have a fiercely protective love for the Carousel. Why? Well, after Disney bulldozed, gutted, or dumbed down almost every Future World pavilion at EPCOT, the Carousel is one of the last bastions of the optimistic futurism that Walt Disney always embraced. And given the company’s track record, we’re terrified that they’ll close down the Carousel one day and replace it with something inane like “Stitch and Duffy’s DVC Adventure Starring Tow Mater”. Sometimes, though, I think that our emotional attachment to the show keeps us from viewing it as it really is.

Unlike other “classic” attractions such as the Tiki Room or Great Moments With Mr. Lincoln, the Carousel of Progress is not a timeless show. It was designed for an audience that no longer exists today. The typical audience at a showing of the Carousel show at the 1964 World’s Fair was composed of people who actually remembered living in each of the time periods depicted. That made the show resonate with them in a way that’s impossible in this second decade of the 21st century. In an earlier post, I said that the Carousel should either be updated to restore the twenty-year gap between scenes or simply reverted to the 1964 version and left that way. I’ve done some more thinking on the subject, though, and I’ve changed my mind a little bit.

First, I believe that Walt Disney’s Carousel of Progress needs to make a return to Disneyland. None of the shows that have occupied Anaheim’s Carousel Theater since the original show left in 1975 have measured up to it, in my opinion. Yeah, I know a lot of people have fond memories of America Sings, but I don’t think singing animals belong in Tomorrowland any more than Nemo and friends belong in Future World. Disneyland visitors have a love for classic attractions that most Florida visitors do not. Therefore, I think that a 1964-flavored version of the Carousel (minus some of the more sexist dialogue) should return to California, complete with a brand-new Progress City post-show on the second level.

Florida, I think, should get a new Carousel show that focuses on the innovation that’s had the biggest impact on today’s generation: computers and the Internet. The show would begin sometime in the late-1970s to early 1980s, where our Carousel family is excited about the possibilities of their first “home computer”, and end perhaps twenty years in the future, showcasing the advancement we expect to have by then. As long as the final scene isn’t too overly specific about the technology and doesn’t make the mistake of putting everyone in “space clothes” that look cool now but will look stupid in five years, it could seem futuristic for a decade or more.

More than just the advances in computing technology, this new Carousel of Progress would be about how the availability of personal computers and the Internet have changed the way we listen to music, watch TV and movies, play games and even socialize. If done well, it would resonate with 21st century audiences much as the original Carousel did with audiences in the 20th century.

Well, that concludes my not-quite-a-series of posts on Tomorrowland. I hope you enjoyed it, and thanks for reading!