The Carousel of Progress: Should It Move Forward or Stand Still?

One of the main criticisms leveled at Walt Disney World management by people like me is that they’re too quick to discard much-loved older attractions in favor of things that are more “thrilling”, cheaper to operate, or that tie in better to whatever licensed characters the Company is currently trying to market. In light of this climate, it’s truly amazing that the Carousel of Progress is still operating.

The Carousel premiered at the 1964 World’s Fair, and by all accounts it was one of Walt Disney’s favorite shows. Its four scenes showed the impact of electricity and electrical devices on the American family in twenty-year increments, starting in the 1900s and ending in an idealized version of the 1960s, with the family enjoying technologies that were supposed to be right around the corner. In 1975, the show made its home on the southeast corner of Walt Disney World’s Tomorrowland in Florida, featuring a new theme song “Now is the Time” and a slightly updated closing scene depicting an idealized home of the 1970s. The Carousel was updated a few more times over the years (most notably in 1985 to remove all references to GE after that company ended its sponsorship) but it received its biggest overhaul in 1993, as part of the “New Tomorrowland” rehab. The original theme song, “Great Big Beautiful Tomorrow” was restored, the show was renamed “Walt Disney’s Carousel of Progress”, and an introductory video was added to the queue area to emphasize the show’s connection to Walt and the 1964 World’s Fair. Also, the final scene was tweaked yet again to show the family enjoying virtual reality video games and accidentally burning their Christmas turkey in a voice-controlled oven. None of the featured technology looked to hit the mainstream for another decade at least. The scene could easily remain in place for six to eight years without looking dated. Or so it seemed. 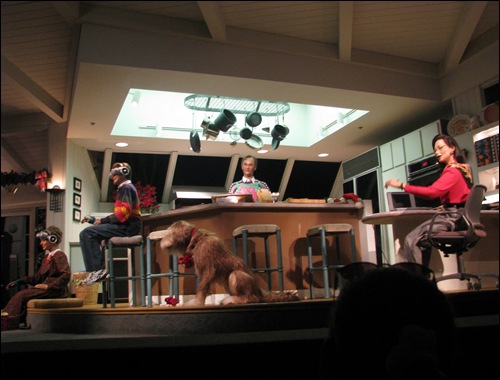 Unfortunately, as early as 1995 the “present-day” Carousel family was beginning their slide toward obsolescence. Why? Because the creators of the ‘93 show failed to account for the Internet revolution. To be fair, in 1993 the Internet was not much of a blip on anyone’s radar. According to technology pundits at the time, virtual reality and CD-ROM were the Next Big Things. And since the show had received at least one update during each decade of its operation, it was reasonable to assume that by 2003 or so, the Carousel would be tweaked again to keep up with the times.

Seventeen years later, we’re still waiting. And each time the “modern-day” daughter character remarks to the grandfather that people of his day “didn’t even have car phones”, you can be sure that at least one kid will tug on his mom’s sleeve and whisper “Mommy, what’s a car phone?”

Also, how crazy is it that the son and the grandmother are playing their video game with Power Gloves? 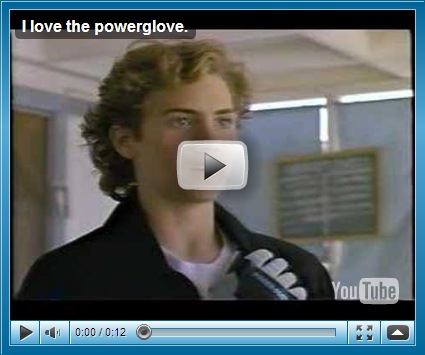 Sorry, but I just had to work the Power Glove joke in there.

Seriously, though, something needs to happen with the Carousel. And I don’t mean simply updating the final scene again to reflect the world of 2010. Consider: the original show showed us the innovations of the 20th century in twenty-year intervals, starting at the turn of the century and ending in the ‘60s. If you reset the final scene to the modern day, then you’ll have a show that takes three twenty-year jumps forward followed by one huge fifty-year jump. And that’s just silly.

The original Carousel was a look back at a period of time that was still fairly fresh in everyone’s memory. In order for the show to resonate with modern audiences in the same way, you’d have to overhaul the entire thing. The first scene would be set in 1950s, the second in the 1970s, the third in the 1990s before we arrived at the 2010s. However, keeping it fresh and relevant would necessitate a big upgrade every ten years in which the “oldest” scene would be discarded and a new final scene set in the current decade would have to be designed and built. Given that Team Disney Orlando is extremely reluctant to spend any kind of money at all on the Florida theme parks unless it comes from a corporate sponsor (TDO did not want to embark upon the costly Fantasyland expansion project; they had to be ordered to do it by Corporate headquarters in Burbank) I can’t imagine they’d actually do this. Which leaves us with only one other option:

Since it’s already called “Walt Disney’s Carousel of Progress”, why not just restore the final scene of the show to what it was in 1964? I mean, the first three scenes are almost exactly as they were in ‘64 (minus the General Electric references) so you might as well be consistent. Sure, it means turning the show into a museum piece, but really that’s all it is anyway. Currently, it’s caught in the awkward position of trying to pretend it’s still up-to-date even though everyone knows it’s not. If they restore it to its 1964 incarnation, it’ll become the kind of attraction Team Disney Orlando likes best: the kind that requires only periodic maintenance. Disney could promote it with some kind of a “you won’t know where you’re going if you don’t know where you’ve been” theme.

Sure, it might seem incongruous to have an attraction devoted to the past in a place called “Tomorrowland”, but since the rest of the land is devoted to cartoon characters, gasoline-powered go-carts, and a roller coaster that hasn’t changed much since the ‘70s, the 1964 Carousel really wouldn’t be so out-of-place.

What do you think?