Project Gemini: The Bullet We Dodged (or did we?)

Every WED-Head worth his or her salt knows that the Disney archives are full of amazingly cool projects that, for one reason or another, never saw the light of day: WestCOT, Port Disney, Beastly Kingdom, Equatorial Africa, the Rhine River Cruise, the 1994 Horizons rehab proposal, and others too numerous to mention. Every few years, someone will write an article on one of these projects and how it almost happened, and we’ll all sigh and reflect upon the cruel twists of fate that robbed us of an experience that would have been cooler than an Optimus Prime-Mr. T-Batman team-up movie.

This is not one of those articles.

In February 2003, everyone’s favorite professional Conveyor of Rumors That Are Best Taken With A Grain of Salt, Jim Hill, reported on an ambitious project to totally remake EPCOT’s Future World into a tree-filled “Discoveryland” by 2006. And when I say “ambitious”, I mean “completely insane”. But don’t take my word for it, see for yourself: 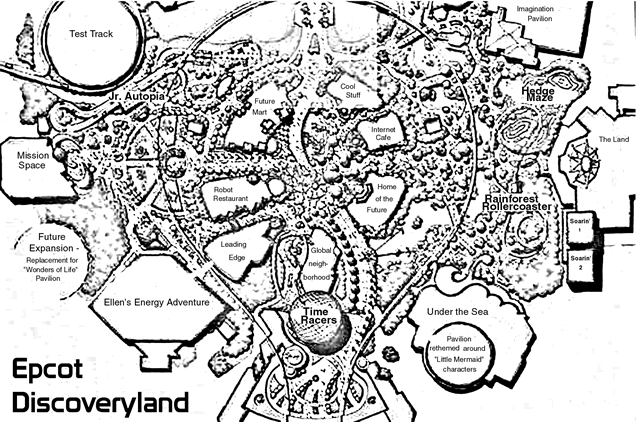 You can read the article (link is here) but I’ll hit the high points. For starters, Future World would have been renamed “Discoveryland”, thus relieving Disney of any pressure to keep this part of EPCOT futuristic. Spaceship Earth (dismissed in the article as a “herky-jerky . . . ride past sleeping monks and smoking ruins”) was to have been gutted and replaced by a Microsoft-sponsored Thrill-ride called Time Racers. For some reason, though, the post-show would supposedly have retained its Global Neighborhood theme from the AT&T days, despite the fact that AT&T would no longer sponsor the pavilion. Maybe this is because Project Gemini never progressed past the early planning stages, and WDI never gave any thought to what kind of post-show Time Racers would actually have, or maybe it’s proof that the whole “Project Gemini” concept was a fabrication. I honestly don’t know.

Wonders of Life was pegged for some kind of replacement, and a “Junior Autopia” would have been constructed in front of Test Track to cater to kids too young for that attraction. The area in front of The Land would become home to a “Rainforest Rollercoaster” which would take you on a “fast, fun, and informative trip through the canopy of a simulated rainforest”. How one would go about designing an educational roller-coaster, I don’t know. Maybe it would’ve had an onboard audio track where the Micro Machine Man rattled off facts about the rainforest while you tried not to lose your lunch.

The only thing the article got right was the addition of Soarin’. The Project Gemini concept placed its show building on the north side of the Land pavilion, between it and The Seas. However, Soarin’ was to have gotten a new film for its Florida debut. We all know what happened to that. And, as I’ve discussed in the past, The Living Seas would still have gotten a cartoon makeover, but it would have been themed around The Little Mermaid instead of Finding Nemo.

The CommuniCore/Innoventions area would also have been dramatically changed. The twin CommuniCore buildings would have been split up into six smaller structures. The east side would have housed “Leading Edge”, where you could see the “latest and greatest scientific breakthroughs” (a scale model of the Large Hadron Collider, maybe?), “Robot Restaurant” (a re-theme of the Electric Umbrella) and the “Future Mart” (because they must have thought Mouse Gear needed a stupider name.) The buildings on the west side would have included “Cool Stuff” a kind of mini-Consumer Electronics Show (which, interestingly, is how Innoventions was initially marketed), and-hold onto your hat-an Internet cafe. Given the fact that even McDonalds has free wi-fi these days, that seems like a pretty stupid idea. But I’ve saved the best part for last, because the alleged proposal for the sixth building in the former Innoventions complex manages to combine an EPCOT rumor that turned out not to be true (Project Gemini) with a Magic Kingdom rumor that also turned out not to be true. It’s the Home Of The Future, which would have utilized some of the Animatronics from Tomorrowland’s Carousel of Progress (which was rumored to be closing). Finally, the look of Future World (or Discoveryland) was to have been totally altered by the dozens and dozens of trees that would have been planted everywhere. That’s not a bad idea in itself, as EPCOT can be a pretty brutal place during those unfathomably hot Florida summers, but it would have totally ruined the clean, open aesthetic that Future World has always had.

So, after detailing the changes that Project Gemini was sure to bring to EPCOT and encouraging his readers to stock up on Future World merchandise because the whole “Discoveryland” thing was totally, for sure, going to happen, at the end of the article Mr. Hill does some pretty serious backtracking. He says that, as of early 2003 the U.S. economy is “in the toilet” (today’s economy must be in the septic tank, I guess) and that any major plans would likely be postponed until after the Iraq War was over (ha!) and things got back to “normal” (ha ha!). Finally, he allowed that the whole project would probably cost over $500 million, and most likely only a scaled-down version of it would actually happen. At least he was right about that part.

The only part of the whole “Project Gemini” hooey that actually came to fruition was the addition of Soarin’. And, rather than getting a new film, Disney elected to save money by using the existing one from California. Sure, Future World has seen some changes since 2003: Spaceship Earth and The Seas were overhauled, and the Wonders of Life closed down without ever becoming the site of any “future expansion”. None of those changes were made according to any overriding plan, however, they all seem to have happened independently of each other.

Project Gemini had two main goals: make EPCOT more exciting to the under-18 crowd, and free the park’s northern sector of the expectation that it should be futuristic. On both those counts, Disney seems to have succeeded. Soarin’ and Test Track are considered must-visit attractions, and people (especially the under-18 crowd) will literally stand in line for as long as it takes to ride them. 100-minute wait times are not uncommon. The Seas With Nemo appeals to the little kids, even if it makes my head hurt. Finally, although Future World still technically retains the name it’s had since 1982, Disney’s promotional materials usually describe EPCOT as a “discovery park”. The futuristic aspect, which used to be extremely prominent, is now barely mentioned.

The way things are today, I really don’t think that a sweeping re-do of Future World is still needed. Honestly, if they’d just take down the tarps in Communicore plaza and fix the Imagination pavilion, I’d be happy. 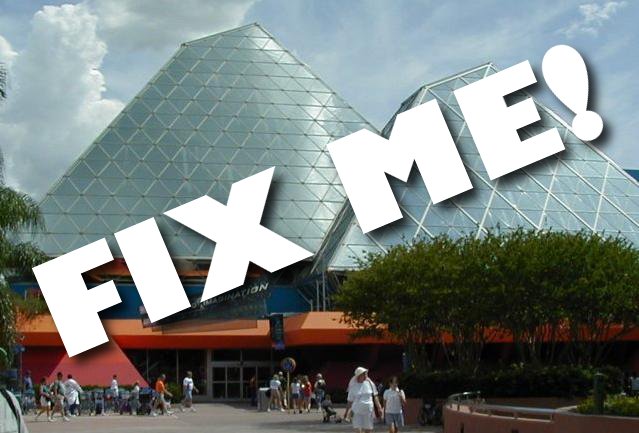