Most hardcore WED-heads (myself included) are not huge fans of Stitch. 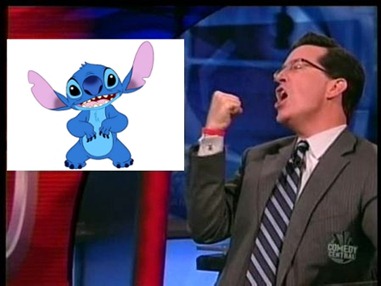 It’s not so much the character himself we dislike, it’s the way that Disney has tried to force him upon us. For the past few years, the company has been shoving him in our faces at every opportunity, as if to say “THIS IS STITCH! HE IS VERY POPULAR! YOU WILL LOVE HIM AND ADORE HIM AND TAKE OUT A SECOND MORTGAGE TO BUY ALL HIS MERCHANDISE!” So naturally we threw back our heads and gave a hearty laugh last year when Tomorrowland’s new show “Stitch’s Supersonic Celebration” was taken out and shot after less than two months. Some fans saw it as proof that Disney’s slow-witted management had finally realized that Stitch is not as popular as they thought he was. However, I think that that there was another, more basic reason for the show’s failure.

Stitch’s Supersonic Celebration premiered on May 9, 2009. For those of you who are unfamiliar with Floridian weather patterns, that’s the time of year when temperatures began to creep up from Merely Warm to Unbearably Hot And Humid. Now, through the magic of Google Maps, let’s take a look at the prime location that Disney selected for Stitch’s twenty-five minute show: 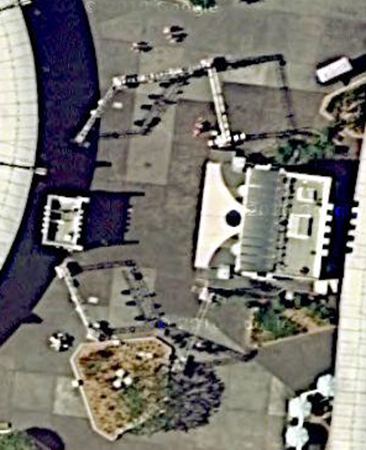 Notice the abundance of concrete and the lack of any shade or seating. I’d argue that Stitch’s Supersonic Celebration was no more insipid than any other stage show in the parks (confession: that syrupy wishy-dreamy show at the foot of the Castle makes me retch) but it failed because people had to stand in the hot sun for a half hour to watch it. Never mind that it’s hard to see a video screen in the bright sunlight.

Of course, this means that the Team Disney Orlando executives are even more clueless than we thought they were. It’s bad enough that they they prefer to ignore common sense and make decisions based solely on spreadsheets and focus group data. Every large corporation does that. But the simple truth that nobody wants to stand for thirty minutes on a large unshaded concrete slab in the middle of summer is an inescapable fact of life in Florida, and the idea that Disney could spend maybe thousands or millions of dollars to develop a show that ignores that makes me think that the group of executives we call Team Disney Orlando is, in fact, a group of trained seals that communicate by clapping their flippers together and barking.

And that gets me thinking. You know how people are always starting silly irrelevant Internet petitions to get corporate executives to resurrect a TV program that no one was watching or something like that? Well, I have a much better idea: let’s just send buckets of fish to the Team Disney Orlando office building with a note that says “Fix Journey Into Imagination and there’s more where that came from”, or “Want more? Fix the Carousel of Progress.” I can’t believe I didn’t think of it before.*

*Note: That suggestion was made purely for satirical purposes. Under no circumstances does futureprobe endorse the sending of buckets full of aquatic or other life forms to the Team Disney Orlando offices. I can’t believe I actually had to say that.