Disney in Space, Part 2: Here’s to the Future and You!

In 1964, with Disneyland in its ninth year of operation, Walt Disney approached Imagineer John Hench with an idea for a brand-new space ride that would anchor an overhauled Tomorrowland. What was the new ride’s inspiration? Dr. Werhner Von Braun’s newest theories on the future of spaceflight? NASA’s drive to put a man on the moon by decade’s end? Actually, it was something much closer to Earth: the Matterhorn.

It may be hard to imagine today, but in Disneyland’s early years the park had no thrill rides. That changed in 1959, with the opening of the Matterhorn Bobsleds. The world’s first tubular steel continuous track roller coaster, the Matterhorn proved to be hugely popular. Walt’s idea was for a similar, space-themed version of the ride, called “Space Port”. It would have multiple tracks like the Matterhorn, but it would take visitors on a fast-paced trip in the dark with special effects to create the illusion of racing through the stars. John Hench’s initial concept sketches pictured a towering edifice that resembled a fanciful futuristic circus tent. 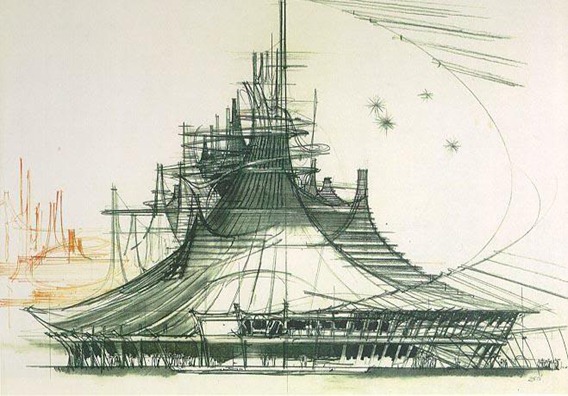 The project was shelved for a number of reasons, one of them being Disneyland’s lack of space. The new Walt Disney World in Florida, however, would have plenty of room, and the new attraction, now called Space Mountain, was the most visible part of Tomorrowland’s Phase 2 that opened with much fanfare in 1975. 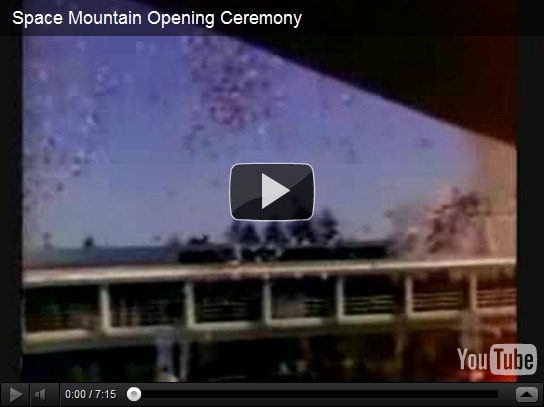 There was a lot more to the Space Mountain experience than just the roller coaster, however. The large indoor queue area was home to one of Disney’s great immersive themed queues. And after the ride was over, visitors exited onto a long speedramp that took them past a series of dioramas that made up RCA’s Home of Future Living. Even if they were unable or unwilling to ride the coaster, guests were still encouraged to come into Space Mountain to experience the queue and the Home of Future Living. I wish I could say I did this during my childhood visits to Walt Disney World, but I never got to. And it’s a real shame, too, because the Home of Future Living perfectly predicted the world of the 21st century: 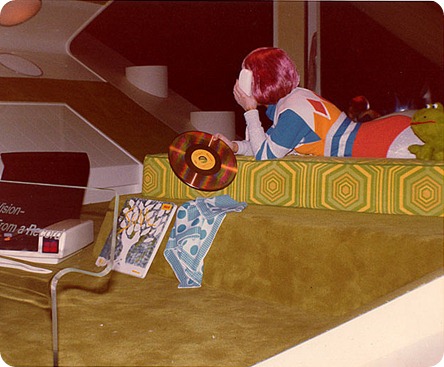 Yep, after a long day at the office, there’s nothing I’d rather do than slip on my multicolored jumpsuit, sit down in my living room that’s tastefully decorated in the avocado-and-gold color scheme that’s so popular here in 2011, and watch a movie on my RCA VideoDisc player. I know all of you do the same thing.

Aside from the 1970s cheesiness, I think my favorite thing about early Space Mountain was the marketing that surrounded it. Obviously, slogans like “Space Mountain-Just Like The Matterhorn, But In The Dark” would not have been very catchy. Instead, Disney World’s new thrill ride was promoted as a realistic space adventure. Just check out some of this promotional prose from the January 1975 edition of Walt Disney World news, which was highlighted on the excellent Passport To Dreams Old and New a few months back:

. . . in Space Mountain, presented by RCA, you, without any previous aeronautical acquaintance, can experience the incredible adventure of outer space!
You'll board the eight passenger space capsule, buckle your seat belt and be whisked away into the most enthralling, free-falling flight through brilliant stars, whirling spheres and unearthly forces ever imagineered!

Obviously, a ride on Space Mountain simulates real spaceflight about as accurately as the Michael Bay film Armageddon. However, this entertainment value-over-realism approach  proved to be very popular, and nicely prefaced the entertainment phenomenon that would take the world by storm just two years after Space Mountain’s grand opening: Star Wars.

In the next post in this series, we’ll talk about Disney’s next space ride, Star Tours. Best of all, we’ll tackle the eternal question of what Buck Rogers and that kid from the 1993 schlockfest Surf Ninjas have to do with a galaxy far, far away.

In the meantime, check out Widen Your World’s fantastic Space Mountain page for more information about the original version of this landmark attraction.

Posted by David Landon at Thursday, November 03, 2011
Email ThisBlogThis!Share to TwitterShare to FacebookShare to Pinterest
Labels: Disney in Space, Tomorrowland