Recently the author of the EPCOT Explorer’s Encyclopedia tweeted an interesting video in which Disney’s Global PR Chief cited a very interesting statistic: for every person who posted something negative about the company, eighteen people would spring to Disney’s defense.

That statistic got me thinking about the way some of my fellow members of the online Disney fan community use language, specifically how the words and phrasing some of them use mimics Disney’s advertising to an uncanny degree. For example, how often have you seen a posting on a message board, a blog, or on Twitter that uses words like “magic” or “pixie dust” to describe the experience of visiting a Disney theme park? Now, I’m not trying to be critical of anyone here. Most companies have approved messaging and verbiage that their employees are expected to use when talking about the company. Such approved verbiage is generally designed to depict the company in the most favorable light possible and downplay any of its faults or mistakes. And as you might imagine, most of the people who are required by their employer to parrot such verbiage don’t really believe it themselves. Some of them are just really good at delivering it convincingly. And that’s why it kind of makes me laugh when I see people who aren’t on Disney’s payroll voluntarily adopt its approved messaging and verbiage in their writing.

And make no mistake, it’s easy to do. The company has crazy good ninja marketers who can write ad copy that melts into your brain and merges with your thought processes without you ever realizing what’s happening. But since I dislike the idea of partially ceding control of my mind to a corporation whose sole aim is to get me to give them money, I believe it’s important that we recognize when these tactics are being used on us and try to resist them. I also believe that there’s no need for me to function as an unpaid parrot for Disney’s marketing messages, like a computer with inadequate security protection that’s become part of a botnet. Therefore, here are a couple of Disney-related terms you will rarely, if ever, see me use on this blog:

Guest. This word has been around since Walt’s time. It’s used to convey the idea that visitors to a Disney facility can expect a higher, more friendly level of service than they might get at their local grocery store or county fair. But let me ask you a question: suppose I invite you over to my home for a steak dinner. I’m asking you to be my guest, right? But what if I tell you it costs $15 to park your car in my driveway, $85 to walk through my front door, and the steak dinner will be $50 per person? Are you still my guest? No, you’re my customer. They’re different things. Now, if I invited you to my home as a guest and the house was a little messy and ill-maintained and I didn’t cook your steak exactly right it’s not a big deal. But if I made you pay through the nose for the experience, you’d rightly expect everything to be better than perfect. To me, calling Disney’s customers “guests” undermines the business relationship between the company and the people who pay to get into its parks and stay at its resorts.

Back to my analogy. Suppose I have a really cool game room at my house, full of the latest in home theater and video game technology, and from time to time I invite you over to play some NBA Jam or watch a movie on my giant TV. Again, if I’m charging you admission to my house and we have a business relationship, you’re not coming over spend time with me because I’m such a cool guy. You’re coming over because I have cool toys to play with, and I let you win at NBA Jam. Now suppose I decide I need to cut expenses-not because I’m hurting for money, but because I’m kind of greedy. So I strip my game room bare, sell off all my cool toys, and block the door with a potted plant and a sign that says “The game room is closed-please enjoy the other rooms at David’s house” 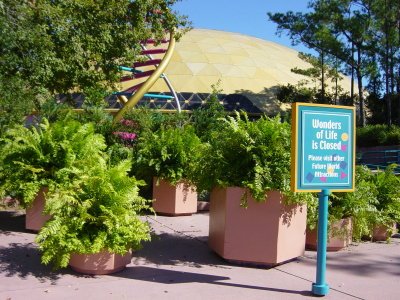 It’s a good thing Disney never does anything like that

And then to top it off, what if I raised my admission price to $95, and continued to raise it once a year regardless of whether or not I bothered to improve or even maintain my property? You’d accuse me of all kinds of things. You’d call me a jerk and a cheapskate. And you would be right. You’d also leave and go spend your money somewhere else. But that never seems to happen to Disney, does it? And why is that? It’s mostly because of their crackerjack marketing department, and another word they’ve plucked out of the English language and pretend to own the copyright on:

Magic. How many times do you hear this word in connection with Disney? The parks aren’t just fun, they’re “magical”. The bus that picks you up at Orlando International Airport isn’t a reasonably nice motor coach, it’s the “Magical Express”. Staying on property? You’re not just paying above-average room rates for the convenience of being close to the parks and getting to use Disney transportation, you’re “staying close to the magic”. This is blatant manipulative advertising language. It helps to foster the notion that an expensive Disney vacation has some intangible value that makes it worth the money. And that’s okay, it’s what advertisers are paid to do. But you’re not going to catch me doing it, because I’m not a Disney marketer and they’re not paying me a penny.

Don’t get me wrong, I like Disney World. And most members of the Disney fan community (especially the ones who link to this blog or follow me on Twitter) are fantastic people. I’m not bashing anyone here. But, maybe because I work in the IT industry and not in sales, I have an aversion to sugarcoated marketing language. So, you’ll often hear me refer to Disney park “visitors”, “parkgoers”, and even “customers”, but never “guests” unless I’m quoting someone else or writing about someone for whom Disney picked up the tab for their visit. And while you’ll often hear me refer to the Disney parks as “fun”, “entertaining”, or “enjoyable” and the customer service as “friendly” or “excellent”, you will never, ever see me use the word “magic” to describe these things in a non-sarcastic way.

In fact, if you ever catch me using words like “magic”, “guest”, or “pixie dust” the way Disney uses them, It’s a sure sign that the aliens have taken over my brain and are preparing to invade, and only Jeff Goldblum and his MacBook will be able to save us.