One of the defining characteristics of the Experimental Prototype Community of Tomorrow that Walt Disney hoped to build in Florida was its forward-thinking transportation system. A key part of this system was the idea that cars entering the city would park near a central transportation hub, where visitors could ride the PeopleMover to an in-city destination or jump on the Monorail to travel to the Magic Kingdom, the industrial park, or some other destination outside the city. Pedestrians, automobiles, and the property’s dedicated vehicles would all move in their own dedicated spaces. Therefore, a pedestrian would be in no more danger of being hit by a car than being hit by a Monorail, and since neither pedestrians nor the property’s mass transit systems would utilize the automobile roadways, traffic would flow much more smoothly than was possible in a large city like New York or Chicago.

Although Walt’s EPCOT city was never built, many of its guiding principles could be seen in the design and operation of the Walt Disney World resort, especially with regards to its transportation system. Indeed, transportation between the resorts and the theme park was no mere afterthought; the Magic Kingdom resort area and its Monorail system were actually designed around each other. At one time, up to five resort hotels were planned for the Seven Seas Lagoon/Bay Lake area, each with its own stop on the Monorail line. Only two of those hotels were actually built (if not for the OPEC embargo in the late 1970s there likely would have been more) but the system was clearly designed for expansion. Of course, an EPCOT Center line was added during the construction of that park, and in the mid-to-late 1970s there were plans in the works to extend it all the way out to Lake Buena Vista as part of the residential/recreational community that was supposed to sit where the vastly inferior Downtown Disney is today. And like Walt’s EPCOT city, the Buena Vista community would have had a PeopleMover system for intra-community travel. How cool is that?

Even though the Lake Buena Vista community never materialized, during the first couple years of EPCOT Center’s operation there was reason for optimism that any future expansion of the Walt Disney World resort would include a concurrent expansion to the property’s futuristic transportation system. But then, in 1984 Disney CEO E. Cardon “I Love Golf” Walker was replaced by the guy who thought Star Trek: The Motion Picture would be as exciting as Star Wars. 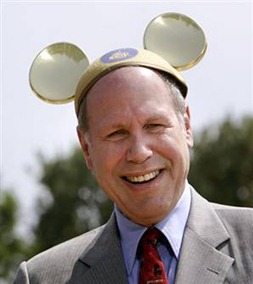 To be fair, Michael Eisner did do a lot of positive things for the Walt Disney Company, especially during his first decade as CEO, and current executives could learn a lot from his early focus on the quality of the theme parks. One reason for his success was that, unlike some of the company’s old guard, he did what he thought best without being paralyzed by worry about what Walt would or would not have done. This approach yielded a mixed bag of results. Yes, it led to the company ballooning into a multimedia behemoth, a run of successful animated films that have become modern classics, and an unprecedented expansion of the theme parks. Unfortunately, it also drove the final nail into the coffin for Walt’s Experimental Prototype Community of Tomorrow.

Under Eisner’s regime, the demand for more hotel rooms on the Florida property was met by the construction of several new resorts. Additionally, the property gained two new theme parks: Disney/MGM Studios and Animal Kingdom. However, since Michael Eisner felt no particular allegiance to the tenets of Walt’s Experimental Prototype Community of Tomorrow, there was no concurrent expansion of the Monorail system, and no addition of a PeopleMover system to link those areas that were separated by shorter distances. Thus, the only way to travel to or from many destinations on property was to use the existing roadways. And this called for a fleet of buses to move people between the various resorts and parks. Of course, an increase in roadway traffic around the property led to stoplights and traffic jams and all those problems of big cities that Walt Disney had wanted his Prototype Community to solve or avoid.

Now, probably 99.999% of the vacationers on Walt Disney World property at any given time do not know or care about this, but it drives us hardcore Disney futurist nerds nuts. We’re fond of saying that the transportation system needs to be fixed, and we’re not just talking about giving the Monorail fleet some much-needed maintenance (or maybe a complete replacement, seeing as how the current fleet is entering its third decade of service) We want to get rid of the buses, and replace them with Monorails or PeopleMovers or even a light rail system. Sadly, that ship has long since sailed.

The original Magic Kingdom-area resorts were built around a Monorail-and-boat transportation system. Future expansions on the property were supposed to follow a coherent long-range plan. Since that kind of long-range thinking was largely abandoned during Eisner’s tenure and expansions were done on a case-by-case basis with no overarching long-term plan in place it would be pretty much impossible to just plug an elegantly efficient transportation system into the property as it’s currently configured.

Unfortunately for we futurists, the buses are here to stay. But who knows? Maybe one day the property will get a fleet of those elevated superbuses the Chinese are working on:

Imagine this thing covered with DVC advertisements and Princess-themed festoonery

Wishful thinking? Probably. But who knows?