The Magnificent Desolation of World Drive

Not too long ago I was browsing through the Pictures library on my computer and I came across this: 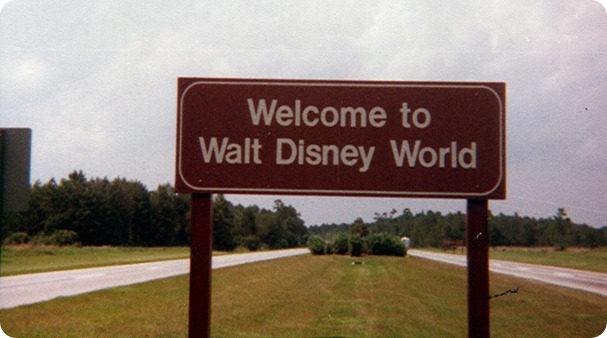 I don’t remember where I found this photo, who took it, or when it was taken. However, it reminded me of an often-overlooked aspect of my early trips to Walt Disney World in the prehistoric mists of the early 1980s: the transition from the humdrum real world to the fantastical world of the Magic Kingdom.

Back then my family lived in St. Augustine, and once a year we’d drive down to Disney World for the day. Today, I know that we took US-1 to I-95 South, then turned west on I-4 and took that to the US-192 exit where we’d merge onto World Drive. As a kid, though, I was completely ignorant of all this. We might as well have been traveling the Trans-Siberian Expressway. All I knew is that I had to coexist with my sister in the back seat for three whole hours (which is an eternity to anyone under age 10) as we drove down a succession of identical-looking four-lane highways that somehow dead-ended into the Magic Kingdom parking lot. In those days, of course, Disney’s Florida property was probably 90% vacant. Most of the Vacation Kingdom was concentrated at the property’s northern end, near the Magic Kingdom. There was an oasis of civilization at the center of the property (EPCOT Center) and the unassuming Walt Disney World Village was clustered around Lake Buena Vista, but absolutely none of these things were visible from World Drive. In fact, to kids like me World Drive was indistinguishable any of the other four-lane highways that crisscross the Florida peninsula. For three hours, I’d stare out the window and see nothing but palmettos and pine trees and pavement. And then, after an interminable wait, my mom or dad would remark “We’re getting close!”

Excited, I would look out the window and see: palmettos and palm trees and pavement. But as I kept looking, something unusual would materialize out of the Florida foliage: 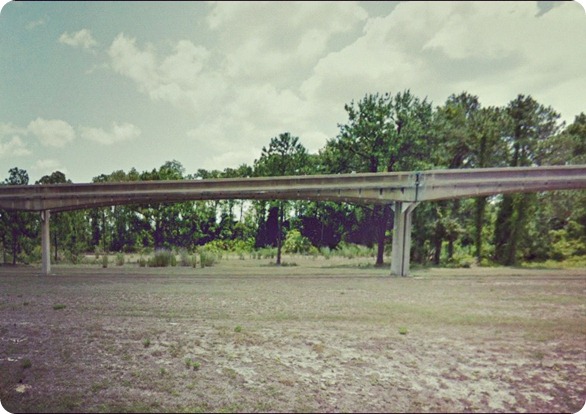 Within minutes we’d be pulling into a parking space, and not long after that we’d be on the Monorail heading toward the Magic Kingdom while the classic Jack Wagner spiel warbled through the overhead speakers, and the boredom of the long trip from St. Augustine was a rapidly receding memory.

Of course, it wasn’t reasonable to expect Disney never to build anything on all those unused acres of land. As soon as you turn on to World Drive these days, you see Disney-fied road signs directing you to the various parks and resorts. And even though a kid might not notice those, there’s no way to miss The Arch: 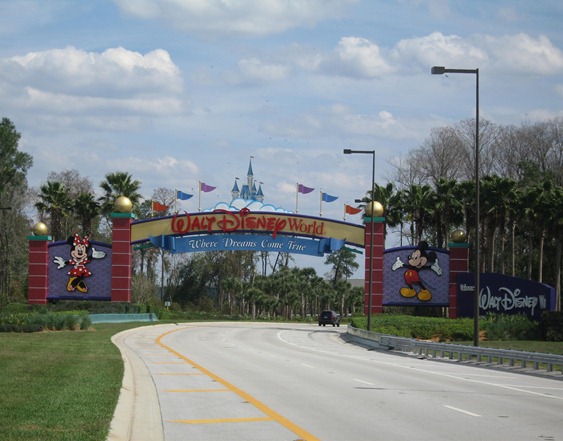 Far from the low-key brown road sign of my childhood, now we have a large, road spanning arch telling you that you are now in Walt Disney World Where Dreams Come True Whether You Like It Or Not. Of course, other structures like the Earful Tower and the Swan and Dolphin resorts are also visible from the road, so the transition from the Real World to Disney World starts a little sooner than it used to.

Is that a good thing? A bad thing? I don’t know. I’m sure today’s kids will look back fondly on the times when, after hours of driving down identical-looking highways they looked up to see the Mickey-and-Minnie-flanked archway rising up in the distance, and knew that they were almost to Disney World.

For me, though, I’ll look back fondly on the times when a simple elevated concrete railway alongside the magnificent desolation of World Drive was your only indication that your were about to be plunged headfirst into a world of yesterday, tomorrow, and fantasy.