The Lost Story of Tomorrowland

Some of my favorite science fiction uses futuristic technology, alien races, and fantastical settings to tell compelling stories about the human condition. And Tomorrowland should have been one of those stories. Sure, it’s got a worthy message (Optimism is good! Morbid fascination with dystopias and apocalyptic fiction is bad!) but there’s a much more complex and interesting message there hiding just beneath the surface.

In the movie this message was totally obscured, mostly because Damon Lindelof couldn’t write a good story even if he were bitten by a radioactive copy of the complete works of Shakespeare. But let’s take a look.

The backstory for Tomorrowland (most of which is conveyed in YouTube videos hidden throughout the movie’s official site) is that a secretive organization called Plus Ultra discovered a pristine alternate dimension and built the futuristic megalopolis of Tomorrowland there so all the inventors and dreamers of the world would have a place free from politics, corruption, bureaucracy, and presumably nationalism to pursue their passions and realize the full potential of the human race. 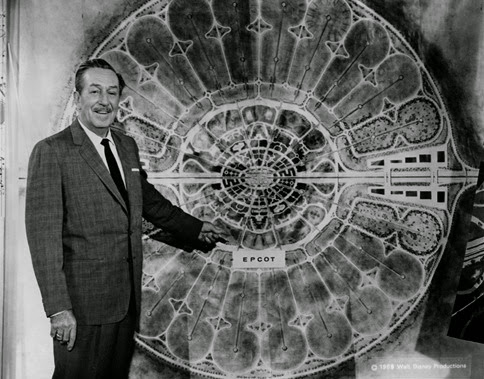 Yes, it’s basically a more fantastical version of Walt Disney’s original EPCOT concept. Walt’s idea was that existing cities were too messed up to fix, so instead he’d build his city of tomorrow from the ground up on a pristine piece of Florida swampland.

In-universe you could argue that Walt got the idea from his Plus Ultra brethren, maybe after plans to open Tomorrowland up to everyone were mysteriously scrapped. But even in reality the ideas clearly share the same basic principle: that all the messed-up stuff in the world is the fault of non-inventor/dreamer types, and if only the inventor/dreamers could remove themselves from those peoples’ influence, they could do awesome things.

This principle is something that everyone in the movie accepts without question. But when we finally arrive in Tomorrowland near the end of the film, something has gone horribly wrong. Like the NASA launch platform at the beginning of the movie, Tomorrowland’s spaceport is dilapidated and empty. In fact, the whole place seems empty except for Nix and a handful of his armed Animatronic goons. The similarity between Tomorrowland and the real world is staggering. Even though it’s been closed off from the outside world more tightly than North Korea, it’s clearly infected by the same pessimism and lack of drive to do anything extraordinary that Nix accuses the outside world of.

What does this mean? That the Sphere O’ Bad Vibes that’s supposedly the cause of all the outside world’s problems is affecting Tomorrowland, too? Or that all this happened because Nix was a bad egg? Only a bad writer would take such an obviously easy way out.

No, the story should have forced our protagonists to confront the fact that Plus Ultra’s founding principle is utterly wrong, their grand experiment a failure. Corruption, politics, violence, and cynicism aren’t the symptoms of a disease that a certain special segment of humanity is somehow immune to. They’re a trap that everyone can fall into, even inventors and dreamers. Isolating yourself from the rest of the planet isn’t enough to inoculate you; it may even accelerate the problem. Everyone has to work to keep the forces of cynicism at bay in themselves. But if cynicism is contagious, then optimism can be, too.