The Next Generation Metamorphosis Misstep

I’m not going to lie: when Star Trek Generations was released twenty years ago I was hyped. The geriatric cast of the Original Series had taken their final bow in the excellent Star Trek VI: The Undiscovered Country three years before, and now it was time to hand the reins to a new, younger cast headed by this fresh-faced youth: 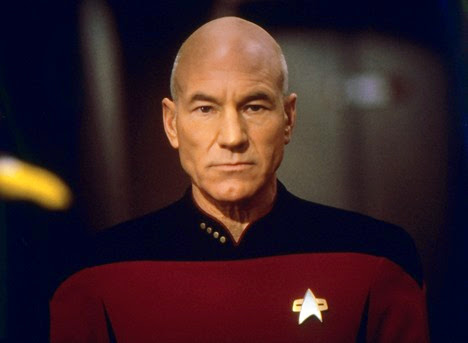 Yes, I believed we were in for a treat. Now, I should point out that I was only 16 years old in 1994, and my powers of criticism had not yet been honed by years of watching and reading Internet critics make fun of things. Although I realized that some episodes and movies were better than others, I basically functioned on the belief that anything with the Star Trek name on it was automatically good. That being said, you might imagine I was confused and disappointed by the decision to pull TNG off the air after its seventh season. But I wasn’t.

You see, even my adolescent powers of observation could tell that the Next Generation writing staff ran out ideas about one season before the show ran out of episodes. You may not remember it, but that last season was pretty painful. Scripts that would’ve been rejected outright just a season or two earlier were now getting made into episodes, like the one where a mutant virus makes the crew de-evolve into animals, or the one where Dr. Crusher resigns her commission to live on a gothic Anne Rice-inspired planet where she has a passionate affair with a green energy wisp. And although the series finale “All Good Things” is widely regarded as one of the best TV series finales ever, fully half its two-hour run time is taken up with meaningless technobabble about anti-time and spatial anomalies and modifying the main deflector to create an inverse tachyon pulse.

So I was glad to see TNG escape the restrictions of a weekly TV show and get the opportunity to tell new and bigger kinds of stories. And you can imagine how excited I was to learn that Captain Kirk would be in the movie! What kind of cool space adventure would Kirk and Picard have together? I was dying to find out, but since there were no Internet spoilers back then (or maybe there were, but the Internet was in its infancy in 1994 and most people still didn’t have access to it) I had to wait until Entertainment Weekly published this photo: 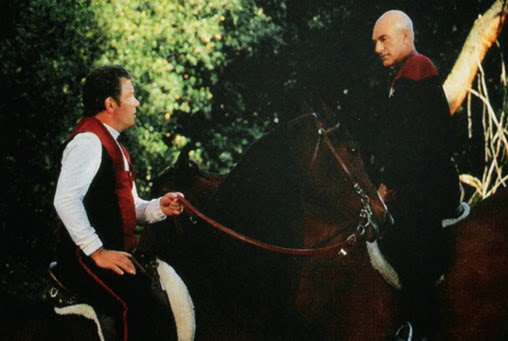 It looked like Captain Picard was out on a horseback ride and he happened to run into Kirk. The picture should’ve made my Bad Movie Spidey Sense tingle, but it didn’t. Honestly, my minutae-obsessed self was way more interested in the fact that the TNG cast would be wearing Deep Space Nine-style uniforms.

Finally, the movie was released and I was able to go see it. I can’t tell you how cool it was to see the Enterprise-D on an actual movie poster: 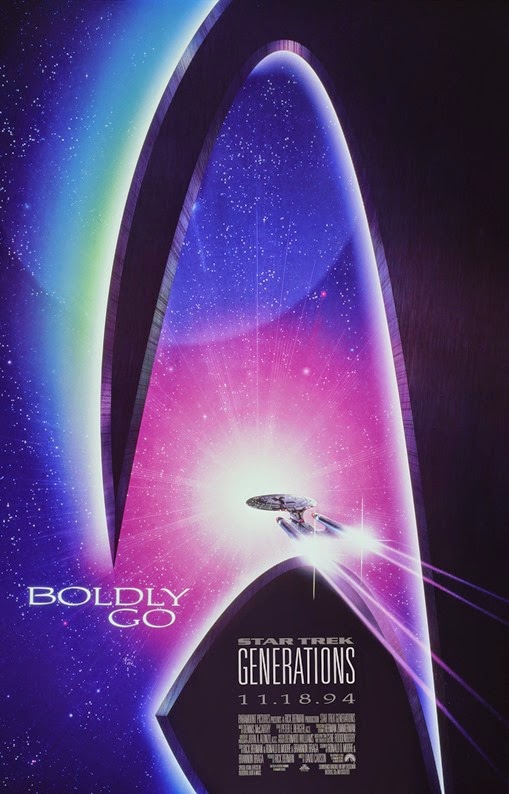 It was even cooler to see the TNG crew in action on the big screen, to see Data finally get the emotion chip, and to see the awesome saucer crash sequence—one of the last big movie effects sequences to be accomplished without CGI. But I had this weird nagging feeling that something wasn’t quite right, that the movie didn’t live up to what it should’ve been. Of course, today we all know why I felt that way: because Star Trek Generations is a piece of crap.

I’m not going to go into all the movie’s flaws here. Other people have already done that far more capably and humorously than I ever could. But I do want to talk about why it’s a piece of crap. What went wrong? There were two main problems.

1. The Script Was A Joke
Generations was written by two of TNG’s best writers: Brannon Braga and Ronald D. Moore. Back when the show was on the air, seeing a “Written by Brannon Braga” credit during an episode’s opening scene meant that were in for some kind of cool reality-bending sci-fi story. A “Written by Ronald D. Moore” credit meant that the episode was going to be a strong character piece, probably featuring a meaty moral dilemma or 24th century political intrigue. Both separately and as a team, the two were responsible for some of The Next Generation’s finest episodes. So what went wrong with Generations?

First of all, it’s not like they were given carte blanche to come up with whatever story they wanted. Before they even got the job, Star Trek producer Rick Berman and the Paramount executives decided that the next movie should have the following plot points:
But that wasn’t all. Because if William Shatner was going to be in the movie, he demanded to have a scene where he got to ride his horse. And Patrick Stewart insisted on having some kind of meaty emotional storyline for Captain Picard. So now Braga and Moore were handed the following list of disparate elements:
. . . and told to shoehorn all of them into the first movie screenplay they’d ever written. All while juggling their regular duties as staff members on TNG. And they even ended up drawing the plum assignment of writing TNG’s two-hour finale. They had to frantically alternate between working on Generations and “All Good Things”, and they’ve admitted in interviews that they sometimes got the scripts confused during that hectic period.

With all that was going on, it’s no wonder that Generations’ story didn’t make any sense! But if blockbuster films of the last decade or so have taught us anything, it’s that filmmakers can always distract audiences from a script’s Death Star-sized plot holes with lots of special effects and fast-paced action sequences. Unfortunately for Generations, that wasn’t an option because of:

2. Paramount’s Broken Star Trek Business Model
The first Star Trek film in 1979 was made on a budget of about $40 million. That’s about $127 million adjusted for inflation, which puts in in the modestly-priced summer blockbuster range. But when that movie failed to be the Star Wars-slaying megahit that Paramount was hoping for, they decided that any future Trek film would have to be significantly cheaper. Star Trek II was actually made by the studio’s TV division for $11.2 million, or about $26.6 million in today’s dollars. That’s the budget for a romantic comedy, not a space adventure. But it was a hit, and Paramount decided that they’d found their Star Trek budgetary sweet spot. Henceforth, Star Trek movies would be strictly low-to-medium budget productions.

This worked pretty well during the 1980s because of simple supply and demand. You see, Star Trek fans had been watching the same 78 Original Series reruns since the show ended in 1969. There was an incredible amount of pent-up demand for new material, so the release of a new movie every two to three years was a big event. Fans flocked to see it over and over again. And thanks to technological advancement, the special effects on even a low-budget 1980s movie were light years better than anything the TV series could have done in the ‘60s.

But by the time Generations rolled around in 1994 things had changed. The onetime scarcity of new Star Trek had turned into an abundant surplus. In fact, Generations had a pretty limited time in the spotlight; the big mystery of Odo’s origins had just been solved a month-and-a-half before on Deep Space Nine’s third season premiere, and about a month-and-a-half after Generations was released the fourth TV spinoff, Voyager, had its premiere. And while budgets on the TV shows might’ve been limited, they certainly weren’t miniscule. In fact, the VFX staff did an excellent job putting out near movie-quality special effects on a TV budget. So in order to make Generations feel really cinematic, Paramount would have to spend some serious money to make sure it didn’t just look like an episode of the show projected onto a movie screen.

Instead they stuck to their same old business model, and Generations was given a tiny $35 million budget (which works out to about $54.1 million in today’s money). We’re still in romantic comedy territory here. The cost savings were realized by using the same sets, costumes, props, and spaceship models from the TV series. They were even too cheap to pay for a movie director, instead hiring David Carson from their stable of Star Trek TV directors. Things were so bad that, not only did they recycle the effects shot of the Klingon ship exploding from Star Trek VI, but they even reused one of the stock Enterprise flybys from the TV show! The fact that they could even try to get away with that shows what a tiny, almost nonexistent gap there was between what a big-budget TV show and a low-budget movie could do, special effects-wise.

My point is that because Generations was made on basically a television budget and overseen by a television producer and a television director using television actors on television sets acting out a script written by television writers and then scored by a television composer it was exceedingly television-y. Simply releasing it in theaters didn’t make it cinematic. And although it got decent reviews and did pretty good business, the one thing that you kept hearing over and over again was that it seemed like a two-hour episode instead of a movie. It was a criticism that would be repeated for all the TNG films. And although at the time I viewed it as a recourse of snobbish critics who thought Star Trek was beneath them, it was actually pretty accurate.

All of that being said, I do recommend watching this movie. Specifically, I recommend the DVD edition with Brannon Braga and Ronald D. Moore’s excellent commentary. You see, between the badness of Generations, the horrible formulaic crapstorm of Voyager, and the sheer incompetence of Enterprise, I spent several years believing that Brannon Braga was a high-functioning idiot boy whose only talent was sucking up to his boss. So I was very surprised to listen to the commentary and hear a very funny, self-aware guy named Brannon Braga candidly admit all the problems with the movie and even point out some inconsistencies I’d never noticed.

You see, in my teens and early twenties I assumed that if a movie or TV show was bad, it was because the director, writer, or producer was an idiot. And while that’s certainly true at times . . . 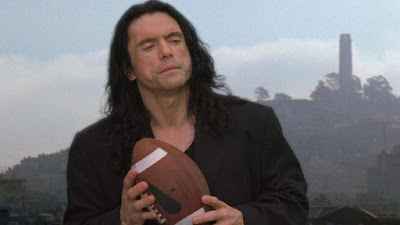 . . . very often there are other things going on behind the scenes that the creative people have no control over, things that are never revealed until years later.

So while Star Trek Generations is a maddeningly unsatisfying movie that I can't sit through without howling in frustration at how stupid it is, it did manage to teach me a valuable lesson. Not about how time is the fire in which we burn, but that even good people sometimes make bad movies.
Posted by David Landon at Friday, October 31, 2014
Email ThisBlogThis!Share to TwitterShare to FacebookShare to Pinterest
Labels: Star Trek, Star Trek: The Next Generation