Star Wars movies will always be more popular than the Star Trek films.

I know what you’re thinking: “Wait, what? I thought you were a die-hard Star Trek nerd!” And I am. But since 1979 Paramount Pictures has been trying to do the impossible: cram the arrowhead-shaped peg of Star Trek into Star Wars’ Millennium Falcon-shaped hole. And it just hasn’t worked. It was never going to work.

It’s no secret that the success of Star Wars (and Close Encounters of the Third Kind later in 1977, which proved that there was an ongoing demand for sci-fi films) was the main reason that Star Trek: The Motion Picture got the green light. Now, there are tons of reasons why the first Star Trek film wasn’t a Star Wars-level hit, and most of them revolve around how boring and slow-paced it was. (Full disclosure: I actually like The Motion Picture) But there’s an even bigger reason that Star Trek was never going to be a worthy big-screen competitor to Star Wars. Let’s compare the two movies’ main casts and see if we can spot what it is: 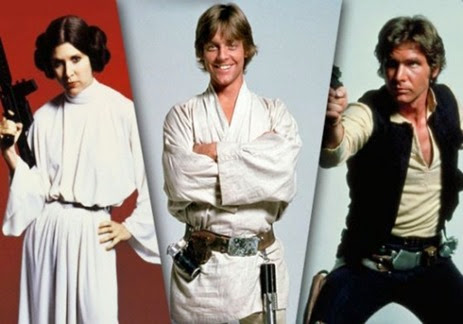 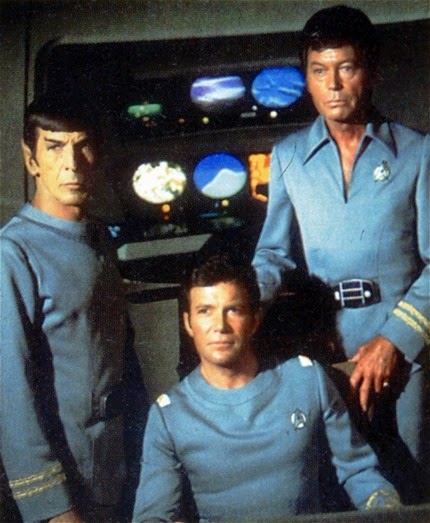 Do you see it now? No, it’s not that the Star Trek cast is wearing 1970s space pajamas, or that their “Big 3” are all male (although it doesn’t help). When the first Star Trek film premiered in 1979, William Shatner and Leonard Nimoy were 48 years old. DeForest Kelley was 59. On the other hand, when Star Wars premiered in 1977 actors Harrison Ford, Mark Hamill, and Carrie Fisher were 35, 26, and 21 years old respectively.

The original Star Trek TV series was popular for a lot of reasons, and one of them was that the show positively crackled with youthful energy. Sure, at the end of each episode Captain Kirk was usually able to persuade the antagonists of the week to talk out their differences, but only after an hour of running, jumping, and fisticuffs. By the time it hit theaters in 1979, a full decade had passed since Star Trek’s TV adventures. The actors, who had been been young or middle-aged in the late 60s, were now middle-aged or elderly. Even if The Motion Picture had told a more action-oriented story, it’s hard to believe that the cast could’ve believably pulled it off. (Yes, I know William Shatner did a lot of physical stuff on T.J. Hooker in the 80s, but the sight of Shatner running has always been more hilarious than exciting.) And you could hardly expect the young Star Wars audience that identified so strongly with Luke Skywalker’s youthful yearnings to do the same for Captain Kirk’s midlife angst.

So why didn’t the studio simply reboot Star Trek with a younger cast? Because the show’s hyper-devoted fans who’d spent the past decade fiercely lobbying for its return would’ve revolted. Thirty years later when the Star Trek fanbase was more of a known quantity Paramount was comfortable taking that risk, but not in 1979. Interestingly, before The Motion Picture was greenlit Paramount was going to resurrect Star Trek as a TV show entitled Star Trek: Phase II. The original cast would’ve returned (sans Leonard Nimoy) but they would’ve been augmented by three new young characters: First Officer Decker, the Vulcan Lt. Xon, and the exotic Lt. Ilia. Besides giving the show a much-needed injection of youth, these characters would also be insurance in case William Shatner or any of the original cast became too expensive or left to do other things. But, the return of Nimoy rendered the Xon character unnecessary, and although the Decker and Ilia characters were included in The Motion Picture, the story conveniently disposed of them before the end credits.

With Star Trek II, producer Harve Bennett and writer-director Nicholas Meyer again tried to inject some youth into the cast with the characters of Lt. Saavik and Kirk’s son David. But David was killed off in the next movie, and Kirstie Alley’s failure to return as Saavik dealt a serious blow to that character. She lived through Star Trek III but was never seen again after a brief scene in Star Trek IV.

Meanwhile, the franchise was rebooted for TV. Star Trek: The Next Generation’s ensemble cast reflected a Battlestar Galactica-inspired approach. You had the wise, older “Captain” character (Adama/Picard) acting as the father figure to a group of younger characters who did all of the action-adventure stuff. (Apollo, Starbuck, and Boomer in BSG; Riker, Data, LaForge, Yar, et. al. in TNG) There was even a kid to pull in the really young viewers (Boxey in BSG, Wesley Crusher in TNG). 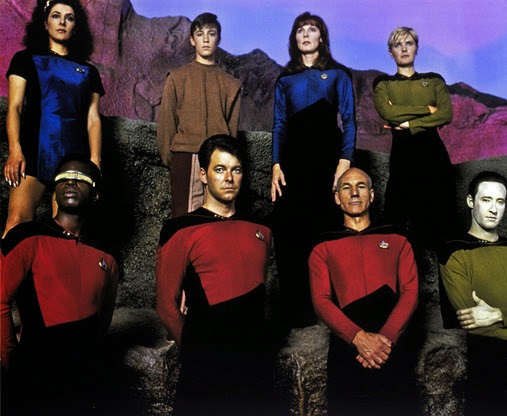 Why are they all looking in a slightly different direction?

The Next Generation reinvigorated the franchise and enjoyed seven successful years on TV, but when they made the jump to the movies they ran into the same problem as the Original Series: those characters who were so young in 1987 were now middle-aged. For the first couple films it wasn’t too noticeable. In fact, 1996’s Star Trek: First Contact was the kind of enjoyable action romp that the Original Series movies could never have delivered. But after that the wheels started to come off pretty quickly. In 1998’s Insurrection it was painfully obvious that TNG’s aging cast of TV actors just couldn’t deliver believable action scenes, with the possible exception of Patrick Stewart. And if Insurrection was painful, 2002’s Star Trek: Nemesis was excruciating. 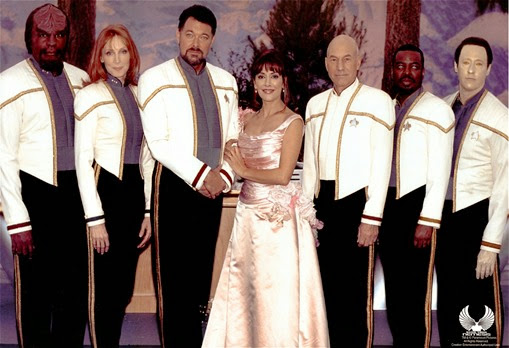 Once again, Star Trek was stuck with a cast that had nobody to appeal to young audiences. And after Nemesis tanked harder than a Pauly Shore biopic, Paramount finally pulled the plug.

But this created a whole new problem. Star Wars can justify its young protagonists because they’re either people with some kind of innate power that gives them a special destiny (i.e. Luke or Anakin Skywalker), royalty (Queen Amidala or Princess Leia), or a tremendously skilled person on the fringes of civilized society (Han Solo). It can even give them leadership positions in the Rebel Alliance, because it’s a ragtag organization that needs all the help it can get.

But Star Trek’s protagonists are the senior staff of a spaceship that belongs to a futuristic NASA-Navy hybrid. The idea that those positions would just be given to a handful of twentysomethings who haven’t even graduated from Space College strains credulity way past the breaking point. Rationalizing it by trying to paste a Star Wars-style “heroes’ journey” on top of it is even sillier. The only way to believably incorporate younger characters is to go the Next Generation route and have an older Captain overseeing a group of younger junior officers. But although that approach works great on TV, it’s impossible to do on film because two hours is not enough time to service all the characters in a large ensemble cast.

What I’m trying to say here is that Star Trek, done properly, is not a billion-dollar film franchise like Star Wars or The Avengers. It’s a TV show. There’s no shame in that. No one’s trying to turn Breaking Bad or The Wire into movies. Sure, a big feature film budget can give us the kind of sci-fi eye candy that Trekkers like me salivate over, but Star Trek is not about eye candy. Like any other good drama, it’s about the characters. And those characters are best served on TV.

Hopefully CBS and Paramount will one day be able to untangle the issues surrounding their shared ownership of the franchise enough to bring Star Trek back to the small screen, where it belongs.